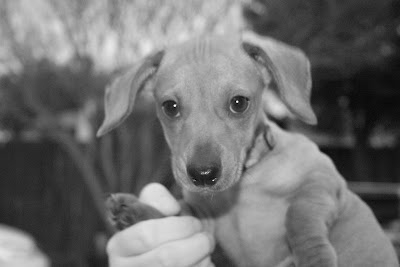 Nothing clears away the stresses of life like the smell of a freshly-hatched puppy. This is Daisy, my sister's new baby. Daisy is a wiener dog, dontcha know, and she's a fine little specimen. She weighs about 3 pounds and she's barely two handfuls. Sweet little thing. She's a power-napper.
The more I think of the death of Anna Nicole Smith, the more I think we are being cheated by our celebrities in this culture-- they are a huge protected class, and should die more often as a cautionary tale for the rest of us. Time was when celebrities were devil-may-care and actually did dangerous things that might land them on the coroner's slab. Remember James Dean? How about all those genius talents who died while in their creative prime - people like Pasty Cline, Buddy Holly and Jayne Mansfield? These days celebrities are generally less substantially talented but with real staying power. That guy Screech from Head of the Class? (He's doing porn now - don't tell me you didn't see that coming) Well, he's going to be around forever. In fact, he may never do another family-friendly cinematic performance, but he'll probably hang with us until 2067 to pick up his Lifetime Achievement Oscar.™ Paris Hilton will go on flouting the dictates of good taste and decency and will become the female Keith Richards, and the world will go on turning.
Class was better this weekend. I got to go see me mum & pop Sunday and my sister brought her brood over. I held the puppy for a while. Niece and nephew are growing like weeds - it's wild how time gets away from you. Brother-in-law wore a knit cap and I said he should be working on a fishing boat, but sister kept saying he looked like a Phish fan. Sacrilege! Nephew is 4 and he'll still let you get the occasional hug, but mostly he's too busy and macho for such silliness. He marched in brandishing his cap-rifle. Sister says he has a huge arsenal and a table piled high with ammo. Merely what every growing boy requires. Niece is playing piano marvelously - it's so gratifying to hear her progress. Oh, and I heard this exchange between my parents:

Dad: That (Anna-Nicole Smith's baby) may be my baby.
Mom: In that case I'll forgive you and raise it as my own.

It was great to see the family - I don't think I've seen them all together since Christmas. I suppose I won't have that opportunity again until school is out in mid-March. Just counting the weeks...
Posted by phlegmfatale at 11:04 PM

It's only there for a short time... But it's wonderful to smell when the little guy is sitting on your chest licking your face...

I miss my puppy.

Your Dad can't possibly be ANS's baby's Daddy...my DB confessed Saturday, HE's the Daddy. That hunting trip he supposedly went on was just a sham, a cover story. But I forgave him, we'll raise her, with the help of Nannies and such, and boarding schools, of course! Thank GAWD, for J.Howard!

It was good to see you too!! A

Ok, it's official now. Your dad is cool as hell, and your mom too. Nothin' like a new puppy. New kitties are fun too, but a puppy will run strait into anything. Gotta love that. On a similar level, your nephew sounds like he's on the right track. I think at that age I was more into edged weapons, making swords and shields out of wood and metal and dueling with the neighbor kids. Paradise. If there is a heaven I'll get to go back to that time again.

Your parents are a hoot!

That puppy is just absolutely adorable!!! ^^

That is the cutest puppy in the world. A

Ben wanted a boarder collie for a while until he found out that breed needs A LOT of exercise, so he's been thinking about a mini wiener pup. I'm still waiting for my English Bull Dog named Winston.