Oh, Sunday was a big yawn in my real estate class - thought we'd never get out of there. It's not feeling like a physical grind, yet, but it is tiresome to sit from 8am until 6:30pm in the same chair. It was kind of interesting, though, because most of the other students were going out of their minds with desperation to get out and watch the ball game.
I've pretty much kept my mouth shut, just sitting at the back, trying to fight the urge to daydream and doing some spectacular doodles. At about 5:00, the teacher was talking about the Fair Housing Act and all that sort of stuff about protected classes, etc., and he talked on and on about who it's illegal to discriminate against. He said if you have cancer, you're not considered handicapped, but if you are an alcoholic, you qualify for handicapped status. I blurted "so if you're an alcoholic you can park really close to the bar." He said "you've been holding out on us, Phlegm, you're funny. You need to contribute more to the conversation." I said "Nah, I don't like showing off." Of course, my nose grew about an inch just then, sassy thing that I be. 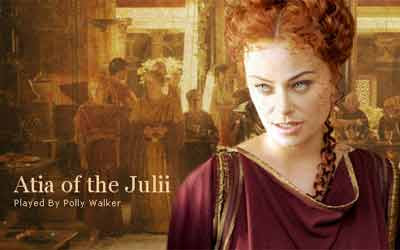 Sunday night's Rome episode was dazzling. Pullo is SUCH a good guy and it's such a surprise to find him to be the most constant of the characters - the most true to his friends. In season one he said he was born in a slave camp, and so when he goes to help Vorenus retrieve his children from a slave camp, it is all the more meaningful. The more mature version of Caesar/Octavian is good - his manner is very like that of the younger actor, and I think he's a convincing fit.
I wish Octavia would hook up with Octavian's friend Agrippa, but we also know from history that Octavia will marry Mark Antony - that should make for interesting family gatherings--not that the writers are portraying events precisely as they occurred. Oh, and Atia is beneath contemptible these days - she's not so much fun when she's so intent on torture, murder and revenge. Obviously Octavian is carrying a grudge, and considering how Atia's defiled the family name by having Servilia kidnapped and tortured, I suspect it will be seen as an honorable thing if Octavian commits matricide. Pity, if he does, though - I'll really miss Polly Walker.
Posted by phlegmfatale at 2:27 AM

See, that teacher at least recognizes a good sense of humor! He's not all bad. Is he gone next week?

Don't have HBO, never seen Rome. That Polly Walker seems rather attractive, though.

I watched The Closer off and on all day Sunday. Jet lag from hell still has me - hence the time of this post. I swoon when Kyra Sedgwick says, "Thaink yew!"

And the all-time Superbowl stats have NFC 21, AFC 20. I looked though the 41 games and don't think I ever actually rooted for an NFC team in the Super Bowl. But Archie's boy got his Superbowl ring, so that's good.

Went over to sis's place and saw the last two hours in succession. The first hour was ok, but the second was excellent. WAY too much sodomy in this thing, but what the hell. When in Rome, right? Too bad the first Octavian, Max Pirkis, didn't have a growth spurt, but the new guy was convinsing. The interesting twist is Timon and his brother. Pullo is clearly the best dude, but it will come to no good end I'd bet. He and Vorenus will eventually come to blows on the battlefield. Can't wait.