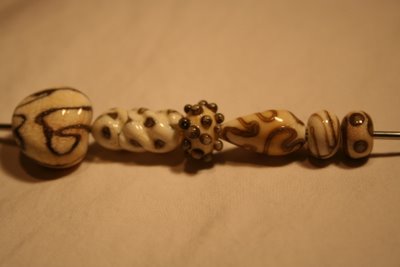 OK, by popular demand, here are some of my crappy little beads. Yeah, I know they're wonky, but they are just right for my wonky jewelry.

Here's a story from this weekend AND about 28 years ago.
In the late 70s, my grandpa and grandma had built a new house about 100 yards from their old one, this time with an indoor outhouse. Creeping out to the outhouse to pee in the middle of the night, I was gripped by an abiding fear that a copperhead snake would bite me on the butt, and consequently I lay awake there many a night, near to bursting rather than risk it.

So the Grands' new house with indoor bathrooms was a glorious thing, but I really wasn't accustomed to the low water pressure situation that came with being off the grid. One event in particular scarred me for life, I'm sure.

In my early teens at their house once, I went to the bathroom only to discover I was afflicted with a case of direer. Horrors!

As would anyone in my delicate state with such fragile sensibilities, I thriftily used about half a roll of tissue on tidy-up duty. I flushed several times, and it all seemed to be gone, anchors aweigh!

To my utter horror, the next person in the bathroom was Grandpa, for whom the new toilet happily regurgitated a goodly portion of what I'd insisted it swallow.

Grandpa then fished the entire mess out of the toilet and carried it into the living room in a bucket showing all and sundry while saying "I just want you to look at what someone put in the toilet!" I took my cues and feigned casual surprise (well, I WAS surprised but not about what had been in the toilet) and hoped no one had kept careful track of who had made the most recent trek to the WC. I was mortified.

Flash forward to last weekend: Haunted by the specter of that day all those years ago, I went into the bathroom and noticed a bit of toilet paper from the last visitor had not gone all the way down the hatch, and even though I could hear the water was still running to fill up the tank, I hit the plunger, knowing no one had been in the bathroom for quite a while - the tank must almost be full.

Not so. I flushed and the water but not the toilet paper in the bowl went down, to be replenished by no more water. PANIC!

So of course, it became my mission in life to fix this situation.

I pulled the lid off the tank and peered in, and water was running into the tank, but at a snail's pee trickle pace, and it was going to take forever at this rate. I looked around for any kind of vessel with which to bail water from the sink into the tank. The only thing I found was grandma's delicate little china cup on the counter with a capacity of maybe 3 ounces. Right. I needed to fill a 5 gallon tank. Might as well start bailing.

I'm short and the sink was a pretty long stretch for me between it and the toilet, so I braced on my left arm and started filling the cup and pouring it into the tank with the right.

I achieved something of a trance-like state. After I'd added about a gallon 3 ounces at a time, a tremor quaked up my stressed left arm and I jolted out of my daze and realized this was ludicrous. I broke down into gales of laughter at how incredibly silly I was, and I felt weak from the exertion and the laughter.

I sneaked into the kitchen and got a couple of large drinking glasses and began to fill the tank. That done, I flushed it and goody - everything went away.

THEN I used the toilet, refilled the tank, and flushed and refilled it again. Mischief managed!
Posted by phlegmfatale at 12:01 PM

People have never really lived if they've never seen a heaving/working bog of crap being moved about by maggots at the bottom of an outdoor toilet!

My fear was that spider that hung out just over from the edge of the hole in the board seat, just waiting to bit my tender little boy parts! Although I was never bitten, the imaginary pending attack was always present.

Our new toilet will be able to flush an SUV. Dick will stand for nothing less and frankly, neither will I.

There's nothing worse than going into the bathroom and seeing someone's...remainders.

I feel an urge coming on by all of this talk.

I'm reminded of the time my husband flushed and left for work before realizing the toilet had flooded. My husband doesn't chew, and he eats a lot of salad. It was like a very stinky vegetable garden by the time I realized what had happened. And I literally had to clean his shit up. For some reason he finds this hysterically funny.

Ah, tales from the toilet. I'm almost positive I could make a living as a plumber with all the fun things a five year old and a two year old (and sometimes a 35 year old) can do and have done to our plumbing fixtures.

Seeing your beads makes me want to go fill up my tanks and make some of my own...and maybe finish some of the pieces I've been staring at off and on for over a month now!

And you LOVE your grandpa? You are my hero. I think I might have killed him in his sleep.
I laughed myself silly over this one PF.
They recently put a "slow flush" mechanism in my toilet - it's all the rage with building owners who don't want large water bills - and they told me and I waved them off, "Oh sure, fine, whatever..."
Then I had a dinner party. And one guest after another faced the humiliating experience of pushing down the handle and having two drops of water flood into the toilet. One guest came out, morified, and whispered, "I broke your toilet."
Nobody was enterprising enough to fill it up by the teaspoonful though!
This was hilarious.

Grandpa really did scar you for life didn't he? hahhaha

kelly - yours is a Great American Toilet™, clearly. Long may it wave.

big dick - it ain't bragging if you can flush it

amy - it's amazing how quickly you learn to diddle stuff yourself instead of calling a plumber. Speaking of beads, I can string a project out for more than a year - if I just wait until inspiration strikes, well, it takes a loooong time.

lj - Yeah, actually I've forgiven him for a lot of boobery, frankly. He's a spoiled, 90-year old adolescent who's never had to consider another person's feelings in anything, and he's very judgmental. So yeah, I've forgiven him his flaws and I'll pretend he's not a cruel fire-and-brimstone critic. I'm glad you enjoyed the story - I laughed until my sides ached when I realized how incredibly retarde I am with that wee little cup. Appalling how your building owners are so incredibly cheap - low-flow toilets are one of my biggest modern complaints - what a load of shit!

zelda - EWWWW! So, your husband is basically a cow-poopie type? eek. He's lucky to have you. *L*

I giggled so hard over this one, my coworker thought I was crying! Mainly because I think I have similarly scarred my children. When the toidy overflows and they come screaming out of the bathroom...I go screaming IN to the bathroom. Having to clean up the overflow is NO FUN...but not always avoidable, unfortunately. My seven year old won't flush...she gets her brother to do it. :D
Maybe someday they'll blog about me! YIKES!

Oh! And by the way? I adore your "crappy little beads."

The beads are cool. I bet it's hard to keep coming up with new designs all the time. Do you have a favorite that you do again and again?.

No experience with an outdoor privy, but lots with hangin' it over a log in the woods. Always a pleasure.

And I always dread taking a dump in a friends place. Figure my huge solid load and all the paper I use will stuff up the pipes and I'll be there in a panic tryin' to keep it from overflowing. TMI?

Are those lamp work beads? They look like some of the pieces I have (I love unique jewelry).