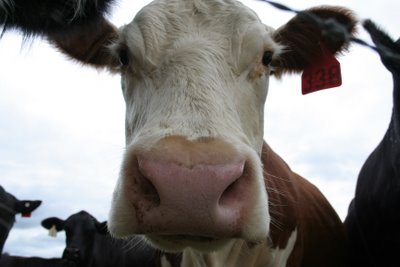 I can't tell you how thrilled I was to get this cow shot on Sunday when I went to the farm of my mom's childhood friend. We spent most of the day on Mary's farm and I got some fabulous cow shots - they are sooooo cute. I snapped one photo of Mary holding a bottle of water while the smart cow - Einstein - drank from it. I told her that she is missing out on a major niche in the boutique cheese/dairy market - high-toned cows that only ever drink water from bottles - very exclusive. I don't think she was going for it, though.

Anyway, we had a blast talking and she told us a lot about their farm, more of which I'll tell later. She talked about what a pain in the ass it is to raise Longhorns because they are mean and skinny and don't fetch as much per pound on the market as an Angus or some other yummy variety. They raise Angus only. She did give me this tip for cooking longhorn beef stew: Throw all the ingredients in the pot and throw in a horseshoe and put over a big fire. When the horseshoe is tender, you know the beef will be ready.

Here's a little sumpin'sumpin' about the wedding: the kiss. The kiss at a wedding should be a chaste, brief event not involving tongues. The one exception to this rule would be if yours is the sort of wedding with people standing around in cut-off-sleeved t-shirts drinking beer from cans - tongue kissing is probably expected at those sorts of weddings. In this case, the 50-something groom looked like he was using his tongue to collect tonsil-swabbings from his 40-something bride - a little juvenile, maybe. Or maybe he was trying to jump-start the old viagra. Who knows.

Anyway, I hope they are happy. Bless her heart, her step-father said it was adultery to divorce her drug-addicted abusive Ex and that it was adultery to re-marry, so naturally he was not in attendance. You just can't win with some people.

Here's to all those hell-bound re-marrying whores who manage to keep bitterness at bay enough to take a stab at love a second time around. Long may they wave.

So, in that funny little way life has of saying "mud in your eye!" (it's called irony) mom came down with what we have best been able to identify as food poisoning, the worst of which hit on Sunday night. No, she didn't eat any spinach, and didn't inhale deeply over a flushing low-flow toilet. I felt terrible for her, because she was truly miserable, plus I really worry about anything that might put a strain on her heart, like protracted bouts of pukiness. [Mom was the youngest, and her siblings all died before the age of 60, two of them with heart problems. Mom is 60 now.] We were going to drive part of the way home Sunday night and save 4 or 5 hours' driving for Monday and get home late Monday morning, but we stopped early Sunday night. She still felt like crap Monday morning, but felt recovered enough to attempt the drive home, and we made it the rest of the way in.

She's much better as of Tuesday night, though still feeling a bit weak. I wish I'd had the food poisoning instead of her, but we don't get our 'druthers, do we? Anyway, despite that unexpected event, the trip was a fantastic time, and we were very early on saying how we need to take more road trips together. We laughed a lot, and it seems we never take enough time just to talk like we should, so we got a lot of great catching up done.

Just the same, it's good to be home.
Posted by phlegmfatale at 12:53 AM

The only tongue allowed at weddings is "church tongue". God, just the thought of what you described is grossing me out. Don't people have any shame?
Your poor mom! I'm glad she's feeling better.

Here's to all those hell-bound re-marrying whores who manage to keep bitterness at bay enough to take a stab at love a second time around. Long may they wave.

PS: Hope your mom is doing much better:)

Longhorns are cooler to look at, but not to eat. The whole church thing blows my mind, that people in this day and age... You know. And the road trips with the folks are always fun. Another chance to get those old stories down. Hope she's doing better.

Sympathies for your mumsie. Road trips with moms are the best! I know me and mine are long over due!

fathairybastard - yeah, longhorns ARE interesting to look at, but they aren't as pretty as a nice healthy looking angus. Yup, stories DO come out on the road, don't they? Thanks!

schnoobie - Thanks - yeah, y'all need to run off and go wild together - frighten your men proper!

big dick - thanks for the get well wishes - she's much better!

Oh my dear Phlegm, you must have never seen "The Wedding Singer" movie.
I demand (with my evil powers) that you go rent it immediately!
Then, you will know where the "church tongue" comes from!