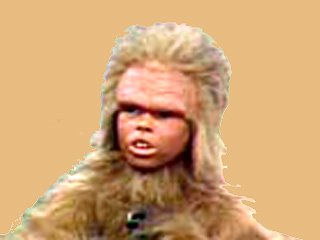 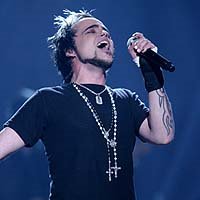 I'm not saying that Lukas Rossi - the monchichi who won Rockstar Supernova - is not cute, but he does bear a more-than-passing resemblance to Chaka from Land of the Lost. He has nice teeth, by the way. Someone I know thinks he's the cutest thing ever and she is perpetually swooning over him. Um, like I said, cute, but I'm not seeing the rest of it. Maybe it's because I'm a jaded old hausfrau. Maybe it's just because he's such a pup.

I thought it was interesting how the whole show came down to the two people with the most distinctive vocal qualities.

It was strange that Dilana tore a calf muscle last Tuesday, and had to be carried around that day and had crutches the following day, and then yesterday she had to have a cane to get about, yet tonight she was prancing around the stage unassisted. Hm. I was just shocked she didn't do any of her patented David Lee Roth air-splits. Sympathy ploy, anyone? Pity party, table for one. She would've gotten away with it, too, if it hadn't been for those nosy kids.

I thought Toby should've won, but his career may be better for not having won after all - he's a good songwriter and he can do entirely his own thing, obviously.

OK, now let's address the issue of me getting sucked into reality shows. I have to go back again and give the disclaimer that the ONLY reason I'm regularly watching broadcast tv shows for the first time in my life, really, is because I now have DVR and can skip through the commercials which make me pathologically annoyed.

I'm SO glad Laura won Project Runway's challenge tonight. When they showed the previews of her so crestfallen and crying, I was certain they were just teasing - that she wasn't about to be kicked off. Then a short bit before the show it occurred to me that maybe she had a miscarriage, and Meatloaf himself would have called that a "pretty big downer." Anyway, she deserved to win.
My prediction is Uli will go home next week.

Anyone watching Million Dollar Listing? That Peter Deep guy was so supremely loathesome that I felt hostile toward him. I can't wish him to go down in flames since he so obviously already does, but he was a wholly repugnant person. It will be fun to see how they savage his homely ass on The Soup this weekend. He buried a St. Joseph effigy in the back yard and recited a "prayer" to St. Joseph to help him sell his house, thus proving that any moron can get their mitts on a million-dollar house in L.A.

Me? Petty? Bilious? You betcha. I gives as good as I gets.

Oh, and anyone else watching that wickedly delicious show from Laura Kightlinger on IFC, "The Minor Accomplishments of Jackie Woodman?" I love the stuffing out of this show.

Sad celebrity news: Whitney has filed for divorce from Bobby Brown. Now, I know I'm going to get serious shit for this, 'specially those of you who know me, but I'm going to do it like a band-aid and just quickly get it out there: I think Bobby is kinda hot. I kept seeing "Being Bobby Brown" referred to on The Soup and I checked out an episode once, and it was really funny, despite being a bit sad and disturbing. I thought Bobby was witty and playful, and sexy in a way, so that totally caught me off guard. And hell, Bobby may have served hard time, but he seems WWAAAAY more together than Whitney. 'cause, you know, Crack is Whack.
Posted by phlegmfatale at 12:26 AM

Dilana tore her calf muscle more than 2 weeks ago. She should have won but I'm more than ok if she cut her own album of with other band.

She tore the calf muscle the day she sang "Super Soul" for the first time - a week ago Tuesday. Even though her song was bad, it smelled like roses compared to Lukas' horrendous "Headspin." If they were just looking for an egomaniacal weenie, why wasn't the final 2 Ryan and Lukas?
Yeah, I predict Dilana, Toby and Storm can all have decent careers if they stick with it.

Lukas reminds me of Brando and he fits the band he will front.

The others can have a better career fronting their own less hard rock bands.

Tommy Lee looks as if he'll never make 12 songs sets for a long tour. I could see it in his face last night, "Damn, I have to do this how long?"

Lukas - barf. Can't stand his voice, but that loser of a band will never sell many records anyway, so can't say I feel bad for him.

Bring back Vinnie and Angela was a complete waste of time on PR. I could have gone the whole show without seeing either of them again and still had the same result in the end. It was nice to see Jeffrey humbled (yeah, right) by being in the bottom two, but I doubt that will change his mindset of self-importance.

I don't watch any of those other shows.

We here in the UK must be watching that in parrallel with you. I thought all the contestants on Supernova were good but none of them were excellent. I liked Dilana, she did it for me but I wouldn't want to be stuck in a lift with her.

I love you for posting a picture of Chaka!

I thought Toby was so freaking HOT and sexy!

I can picture Lukas, I think he fits.

Dilana is way talented, but I have a hard time getting past her scuzzy dirty girl image. Besides I KNEW no way were they going to pick a chick. All the better for her anyway, she'll go farther on her own.

I was so glad to see Storm go. She got on my nerves. Always in the corner jumping, waving, making dramatic expressions, such a attention whore. UGH!

Dave Navarro didn't seem like the Nice Guy that he usually is this season. Maybe he is still smarting from his split with Carmen.

I wanna agree with you about Uli, but at this point in the game, any one of those folks could have a brain fart and go down in flames.

And I have watched the last few shows of Listing, and enjoy the personalities. The one salesman who was trying to sell the 3 million dollar house cracks me up, and the lady saying that the best clients are dead, because they don't get in your way, hilarious. And the dude who was moving to Mexico because of Bush... Imagine how nice traffic would be if everyone else would follow his dumb ass.

Sister, I'm getting concerned. A

mushy - well, you ARE right about that - the others sang too much poppy music to be taken completely seriously - there seemed to be a somewhat consistent vibe to the music Lukas brought, or at least in his delivery. Aw, shit - Tommy Lee's happy to have some more money rolling in, but yeah, he may be getting a bit old for the road, 'specially with breaking in a new singah. Yuck. They should have had Lukas do "Girls Just Wanna Have Fun" or a vocal rendition of a Kenny G favorite.

kelly - well - at least we knew they planned something from early on - that bringing back eliminated winners stunt. Me too, could have lived quite nicely without seeing Vince or Angela. And it was a rather cruel thing to put them through, too, don't you think? ESPECIALLY considering the producers admitted in an interview that the judging is based on cumulative performance rather than just the challenge at hand. Jeffrey, humbled? The way he entered the green room with his birds flipping in the wind? Well, it was nice to see him suffer for an instant, if nothing else. He has a good poker face, but that insistence on wearing sunglasses all the time is insulting. Jerk. I HATE people who do that - it's so fake and shitty. Like the pothead pool-keeper on my property. I'm going to sing hallelujah the day I fire him.

tickersoid - *L* Yeah the most interesting people to watch are usually better from a distance. A safe distance, yeah?

celebrity rant - Toby was good, and yeah, he is adorable. I'm glad he won a car out of the deal, at least. Dilana may be one of those chicks who has a lot of self-sabotaging issues. I think she's a phenomenal performer with a remarkable instrument, but I agree she'd fare better as a solo performer - she seems more like a dictator than a team player. Wow, another who hated Storm? I LOVED her. She was very cool - then again, I didn't see the season from the beginning, so I don't know about her early-on stage antics.
Tommy Lee? I'll bet he'd totally "do" you, too, honey.
Dave Navarro? That man can be as nasty as he wants to be. Now THERE is a dictator I'd LIKE to see. I'm just sayin', too!

fathairybastard - Good point. Next week will be very interesting. Yeah, Scotty Brown - when I first saw him on a commercial, I didn't like him, but the more I see him now, the more I like him. He's a real showboater, isn't he? The comment about the best clients being dead cracked me the hell up, and I'm sure I agree with her. Oh, and that insipid Peter Deep going to Mexico because of George Bush - what kind of syphillitic sack of shit bases their satisfaction with a country based on an elected official? I'd be willing to sponsor at least a couple one-way tickets for people who wanted to join him permanently.

Ok, I have one more comment that I just now thought of.

Didn't Heidi say that they brought them back because they won a challenge? Didn't Robert also win a challenge with Kayne (the Miss USA one)? So, why wasn't he brought back as well?

Also, Heidi said that to stay in, they had to win the challenge, which meant one of them was automatically going back home anyway, considering they both couldn't win.

Yeah, I was right the first time. Complete waste.

Great Land of the Lost reference... wasn't it?

I agree, Uli will be the next to go - although I can't stand Jeffrey!

Michael has it in the bag I think.