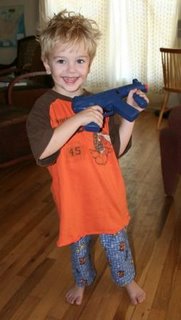 Four years ago today it was raining--not a brutal hammering rain--just the gentle sort of rain you get at the end of summer when things are cooling down a bit. On that day we also were graced with the arrival of a fearless, intrepid boy, my nephew. You may recognize the gun and the pajamas from earlier when I posted his ferocious bear-killer face and stance. This was take one, when I first said "make a mean bear-killer face." This was one of those moments when I had to make a conscious effort not to laugh at his ardor, because he was just so excited by the thought of killing a bear that he didn't have the self-awareness to look truly mean. What a brute, eh?

He is an absolute joy, and as with his sister - when I think about how happy he makes me, I could cry like a baby.

He's small now, but I know one day he'll be a huge man, a natural athlete, and probably more adventurous than will be healthy for his old auntie's nerves. He wants to be a pilot, and he would carry a light saber daily if that were possible, and I believe he'll probably kill a bear someday - he's not the sort to give up on a dream. So for now, I'll just sit back and cherish how delighted I am that my sister and brother-in-law brought such a wonderful gift into our family as this little man, our pocket Atlas. And I'll always remember his arrival during a late-summer rain, a harbinger of the unsurpassably lovely changing of the seasons. Happy Birthday, Bear-Killer! Aunt Phlegmmy loves you very, very much.
Posted by phlegmfatale at 1:56 AM

He is adorable! No wonder you are such a proud auntie.

What a real cutie! I've got two nephews 10 and 5 - the 10-year-old hasn't wanted to know me for a few years, the 5-year-old is such a deep thinker he's quite beyond me. So all hopes on my 7-month-old niece now. Your nephew may always be lovely, but just in case, love him to bits while they let you! I'm SOOOOO envious!

Aren't nephews the best? I never thought that one of my crazy family members could bring such a ray of sunshine into our lives ... how lucky we are!

Yours is so cute, the bear killer thing is priceless :)

barbara - I'd still love him as much if he were as homely as a plug nickel - this kid's got a great spirit.

meg nakagawa - He is on that doorstep between needy little boy and the capable lad who's too macho for hugging and kissing. He's actually quite cuddly and lovey-dovey. I hope to make the best of the remaining tolerance he has for being doted upon. Yeah, your niece is definitely the one to set your sights on - You need to have a girly-day ritual like I did with my niece when she was small. She's 9 now, but she'll always be my baby lamb.

heather b - Yeah, nephews are wonderful people, indeed. Glad to hear you are blessed in the nephew department too. Yeah, I LOVE the bear killer thing - he's so fierce!

Bear-Killer had a wonderful birthday. He picked out a new gun and sword today. I wish he could stay four for longer than a year. A

He's so cute and look how happy he is. Priceless.

Aw, sister, your kids are such little peaches at every stage, so it's easy to wish them never to grow up. I'm glad he had such a grand time.

becky - Thanks, hon. He is a good-natured little soul. You should see the way grown women flirt with him, and he smiles right back like a daisy upturning its face to the sun. I think we have a budding chick-magnet on our hands.