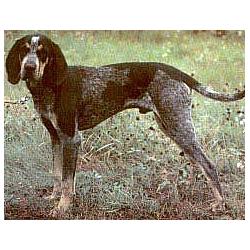 For many years, my grandpa was a breeder of Blue Tick Coon hounds. I looked up these dogs on wikipedia, and I was amazed by what a pureblood and old breed of dog this was. I think I mentioned all that in my post about my grandpa a couple months back.

What I didn't tell you then was that grandpa was fanatical about these dogs. Because one always strives for the perfect hunting dog, grandpa was super-picky about how these dogs were bred.

For those of you who've never been blessed (or cursed) to be in the company of male and female dogs when a female is in season, well, they can be very determined creatures, and they seem to have a demonic drive to hook up.

Once grandpa went in to town in the car with my dad (about 8 years old) in the back seat with a female dog, and my uncle in the front seat with a male. Grandpa had a way of walking up the high street and stopping and talking to all and sundry, and his kids still talk of what eternities they languished in the car while grandpa did his requisite chin-wagging with the locals.

[It is important here to note that in the South, only women are capable of gossip. Endless hours spent by men talking about other people's business is merely a frank exchange of information vital to the proper functioning of the community.]

On this particular occasion, the female dog was in heat, and grandpa admonished dad and my uncle that if these two dogs united--well--they were made to understand they'd get a be-all end-all whuppin,' an event not to be desired.

Dad was holding onto the female by the collar, and she was most determined, as Uncle Wayne barely managed to restrain the male. Dad said the male was "about to get the job done."

I don't know what verbiage exchanged between dad and my uncle, but I do know they were desperate not to get the whuppin', so Wayne had a stroke of genius that relieved them of the threat of raw backsides while cleverly incorporating a stripe of sadism for which he is known far and wide.

Holding onto the collar of the male in one hand, he reached over with the other and popped the cigarette lighter in on the dash and waited. When the lighter popped back out, Wayne pulled it out of the dash and applied the red-hot coils onto the dog's scrotum.

Ironically, a flaming set of balls instantly cooled the romantic ardor of the male dog, and he lost all interest in the bitch in the back seat. The dogs settled down, grandpa returned to the vehicle none the wiser, and dad and Wayne lived yet another day without being thrashed within an inch of their lives.

Dad said for the remainder of its days that dog had a perfectly burned circle on its nutsack. Grandpa never noticed.
Posted by phlegmfatale at 1:35 AM

Man, that hurts just to read about it.

Yes, you DO complete you. There is nothing I can add or comment or subtract from this beautiful story of two boys. I just hope the male dog was ok when his services were required.

fathairybastard - You know, hon, I knew that story would make all you fellows cringe, but in the spirit of disclosure, I had to tell it. Aren't you glad I did?

meg - *LOL* You know, it's funny that I never thought to ask if any more fruit ever sprang from that dog's loins. There's no telling - maybe the dog was a crap hunter or had bad conformation that was not desireable in the breed. I think, though, that they are such instinctive natural hunters that a dog may be a superior hunter even if its parents weren't.
One thing I find fascinating about these "scenthounds" is how their sense of smell works and how their body shape effects their hunting performance. Blood hounds, basset hounds, weiner dogs, coon hounds, etc., all have big floppy ears that have the effect of re-directing the odor of the prey toward their noses. Coon hounds are about the most keen-nosed of all the scenthounds, and can even be top hunters when they are blind - isn't that amazing? And all those years I thought they were just grandpa's silly old dogs, when in fact, there was a method to his madness. Still, it was unconscionable for him to threaten dire punishment on two little boys for not controlling bucking horny dogs.

When I was younger, my older cousin heated up a car lighter and told me to stick my finger in. Being young and naive, I obliged. Although it hurt like hell, I have a feeling that dog was in worse pain then I was!

Poor pup, but I would do pretty much anything to avoid a good thrashing - I can't believe your Grandpa never noticed!

I never thought of their ears. I just thought they were big and floppy to make them look cute since thier day job is such a ferocious one. Blind Dogs Hunting.... that could be the next big B horror film - possible shot on a farm right here in NZ!

heather b- wow I think we have some of the same cousins - I had one whose apparent goal in life was to see me in mortal peril. Poor us, eh?
I dunno, somehow I think the scrotum wasn't the most sensitive area of his wedding tackle, although I do appreciate that the dog must have experienced some profound discomfort. And yup, me too - I would do anything to avoid a thrashing like that.

meg - yup, those floppy ears are there for a reason, and it's not just looking cute. Well, perhaps you and i need to write that blind hunting dog screenplay and then Peter Jackson can shoot it for us in NZ. We'll have to throw in a bit of drama involving sheep, right?

I'm sure that same method can be used to effectively kill the ardor of teenagers in heat, too.

nuggetmaven - *L* Yeah, but don't let the ACLU catch wind of it.