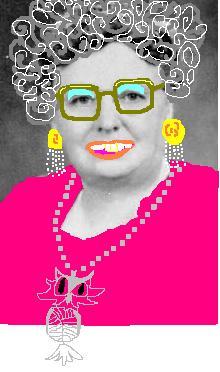 There's a kooky older lady who dates a 70-something friend of my dad's. Dad's friend is a pain-in-the-ass all by himself, but along with Flossie, they form the ultimate gruesome twosome. Flossie exhibits many hallmarks that would make a classic lovable old Texas big-haired gal, but she has some extremely irritating traits that trump all the good stuff.
In the positive category, Flossie has an enormous meringue 'do of salt-and-pepper hair that you just know she wraps in toilet paper every night. She wears enormous dangly earrings and gigantimous necklaces like the classic 60s jointed owl pendants, and their little tails hang precariously from the sheer precipice of her quad-Z-cup bosom, a fluttery metallic reminder of the 800 pound cleavage in the room. Big ugly rings. Keeping with the gold theme, some of her eye teeth are crunked out, with a rim of gold gleaming from aound the perimeter of several pearly yellows. Lee Press-on nails-- LOVE that shit! Eyeglasses that were ugly when they were new 15 years ago. Loud clothing. She can be very sweet and endearing and has a way of calling every waiter "honey" that makes her seem grandmotherly toward them. Yes, she is a Quigman.
In the negative column - Flossie wears a garish, cheap perfume that will cling to your hair and clothes from the moment she enshrouds you in her bear-like hug until the next time you wash them. Honestly, it's up there in the world-series of stink. Perhaps most damning of all to the public at large is that she is seen out with the wastrel guy she dates, dad's friend.
Sometime I'll post about him and tell how he goes into crowded restaurants and tells the host that he is diabetic and his enormous fat useless ass needs to be seated immediately. I've no idea if that has ever worked, but I know he's done it more than once. Obnoxious.
But the thing about Flossie that is beyond redemption in my eyes is her flagrant giggling and flirting at my father. I can understand that, by virtue of hanging around that gasbag she dates, she gets to enjoy the company of my extremely handsome father, but bitch! Please! Have the decency not to act girlish and coy at a man in front of his grown children. This one might just kick your ass. (If my mum doesn't first, that is)
Once Flossie and her man insisted my parents go on a short trip to a holiday resort with them. They flew on a small propeller plane from Dallas, to a small airport mid-way, and then finally on to the resort. This small plane was run by a long rubber-band extending from the prop to a big hook at the back of the fuselage. Flossie and the old goat sat their big butts at the very back of the plane, and my dad, from whom I inherited my terrific spatial sense and knowing that there was a woeful amount of weight at the back of the plane, watched the pilots struggle to get the plane off the ground. There was one seat on each side, and an aisle in the middle, and the pilots were fully visible to all passengers. At the mid-point stop, the two pilots got off the plane and re-arranged the baggage under the floor so that less weight was in the back of the plane, and had Flossie and partner move forward and sit over the wings. No lie -Flossie & Co. were probably about 700 pounds of horseflesh.
What does make me sad for her is that her 50-ish meth-head son burned her house down last year with her annoying little dog named Destiny in it. In my opinion, naming a dog Destiny is just asking for trouble. I could write an entire series of crap novels based on dog events:
Destiny Craps on the Carpet
The Mailman Cries Destiny
Groomed for Destiny
Destiny in Flames
Yes. I feel terrible about it - that last one was so wrong!
I did a spell-check and my artistic rendering of Flossie multiplied by cellular mitosis, apparently. Don't know what I did wrong.
Posted by phlegmfatale at 12:40 AM

holy crap...if I wasn't laughing so fucking hard I'd be able to breath on my own but I've had to activate our home oxygen unit....good thing too. Now to slip the doob in the air chamber....heeeee

ha! Poor you, jerry. I'm so glad I could bring you tales from the Big Texas Hair front- it's a dirty job, and I'm loving doing it.

I love the way you worked in one of my favorite words: gigantimous.

Holy shit! Flossie is HAWT! NOT!

I don't know about you, but going to a resort with Flossie would scare me to death. She's scare away everyone!

Strangely I think my Aunt Sandy will be Flossie in about 10 years. She's almost there, but needs a tad bit of tweeking to finish off the look, but she'll figure it out. She's crafty that way.

I can't imagine why I haven't been here until now! I'm blogrolling your sweet Texas ass!

I liked your novel titles, but Phlegm, I'm worried that the jewellery you super imposed is of your favoured design

Though I only know you from your writing, I have no doubt that you could kick some ass ... so that woman better watch it. Also, that perfume sounds like the worst. And, naming a dog Destiny - probably not the best idea.

Flossie is definitely not one-of-a-kind: I think there is a mold somewhere because I have met two or three Flossies in my life. Not intimately, thank Destiny.

And the double photo—I hope to hell you aren't passing out 3-D glasses!

I had a nieghbor like that when I lived in Philly...

I like the photo duo effect. Garishly Warhol-esque.Very effective.......

Hahaha. But I think you just stole Flossie from a Far Side Cartoon. No one like that can really exist :)

"Keeping with the gold theme, some of her eye teeth are crunked out, with a rim of gold gleaming from aound the perimeter of several pearly yellows."

Oh the visual! You have such a way with words!

The FAA just concluded a study last week, saying that a majority of plane crashes (smaller planes) are from people being too fat.

HOLY LAWD and MERCIFUL JOSE! That is the funniest post I have read in a long time. She sounds like my moms friend, Diane. People like that just spice up the world, don't ya think?

I'M BAACK! Guess who?! Just don't say my name out loud...they might find me.

Your gonna crap when yo see my new blog...thats all I'm gonna say.

ms. m - I'm loving your trailer trash avatar! Thanks for the props. Yeah, I suspect lots of people know a Flossie. I would find her adorable if not for her vile companion and the flirting with my dad thing - unconscionable!

Yup, ben heller - Flossie's going to be my model! Customers will stay away in droves

will - why thank you, honey- even the the most fragile Texas flower likes to think she can serve up a heapin' dish of whoop-ass should the need arise!

ranger tom - another? Maybe they are the alien infiltrators I'm always hearing about...

schnoobie - why thank you. I'd like to think Warhol would enjoy getting a gander at Flossie

Ian - next time you're through Dallas, I'll have to arrange for you to meet.

attila - why thank you so much - I'm deeply complimented - your blog is fantastic. The "pearly yellows" was so incredibly mean that I almost didn't use it. Then I went whole hog and mentioned the dead dog, which was WAAAAAY hypocritical of me, considering what a sap I am about MY dog. But my dog is a kick-ass little bitch, and not some useless yappy thing.

Phoenix - seriously? Fat people cause light aircraft crashes? Disturbing.
And yup - speaking of aircraft - her bazooms look like a pair of GE Engines on a Boeing 737 - she sashays into the room behind them, like the prow of a ship, cracking her gum with verve

cp - so glad you liked it hon - it was so mean I almost felt guilty, but not quite. Family members have read this post and declared it raw but true, all saying my doodled pic looks like her. Yeah, they spice up the world and light up our lives. I'm going to continue considering the possibility they are a plot from outer space...

YIPPEEE!!!! I'm so glad to see you - was getting worried you'd abandoned us! Can't wait to see the new blog!

Hahahaa! That was such a funy story! I think we all know at least one person that comes close 2 Flossie! I just luv'd the word--
Quigman. That's Great!
:)

I hate it that I laughed about Destiny's demise. But shit. Destiny?

Destiny's Demise. That should be the name of some all-girl group. Wait, isn't it already?

Poor puppy. It had the misfortune to be adopted by such a woman.

I would have stolen it and named it Killer or some other tough dog name.

(I'm actually quite sad about the dog and feel very guilty for laughing.)

Girl I need a great laugh. However I think Flossie has been in our neck of the woods a time or two. Or does she have sisters? Thanks for the laugh gonna link you to mine. Its too good not to share.
Thanks girlfriend

starbender - yep, those alien Flossies are taking over!

nongirlfriend - I really DO feel for her about the little dog - it was a terrible thing to have happen. I'm just saying that name was asking for it.

patty - Yeah, she has like, 5 sisters, actually. Glad you liked it, hon. Come anytime!

Hahaha! I had to laugh out loud at the description of the plane and the weight distribution. And, there's no question: there's no flirtin' with another woman's man!