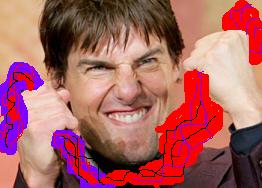 I FEEL THE NEED - THE NEED TO FEED!

OK, we've reached fever-pitch in the celebrity crisis center when we've gone THIS far beyond The Emperor's New Clothes. Tom Cruise simply wasn't wacky enough when he threw a doo-doo hissy on Oprah's show. He had to go one step beyond (several steps, truth be known) and remove all doubt forever and ever amen. He's got some kooky ideers about how women should be doing the whole birthing thing, and well, that makes as much sense as me giving relaxation tips to a guy getting his prostate checked, but anyhoo... We'll see how long his relationship with the implantee lasts after his admonitions requiring a drug-free birth and a week of absolute silence during the baby's first week. Suggested baby gift: a magazine rack, because this child is going to have a lot of issues. Unfortunately, no such moratorium on pre-birth idiotic statements exists in the Scientology pedagogy, and Tom worked overtime to persuade us that he is more than a whole bubble off plumb, disgorging that he intended to eat the placenta of the newborn. (Here are some placenta recipes I found online along with handy tips for preparation. I know. On the same site there are the rules of placenta etiquette - use the seafood fork on the right, and it's considered the height of rudeness to eat the umbilical cord before the chorion - who knew?!!! This website knew. I expect you'll all be thanking me for saving you embarrassment down the line, but no need - I'm just helpful that way.)
Here's a little tip for you, Tom-boy - that is what we in the business call an overshare. By golly, eat whatever bodily waste you see fit -- toenails, boogers, pet dander-- but for goodness' sake, please don't tell us about it. 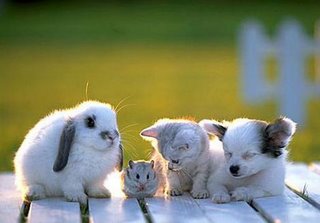 I considered (boy, how I considered it!) posting a placenta photo on my blog, but by golly, there's enough ugliness in the world already, innit? Nothing can wash away the bitter tang of celebrity idiocy faster than a turbo-dollop of cuteness, which I have courteously provided.

After birth if a woman was bleeding too much my midwife would make them chew on the placenta and this somehow could save your life if you ever give birth in the wilderness. But ewwwwwww!!! I would love to see that spacenut freak eat that shit. When he gets his face lifted he'll say "Its not a facelift, it was the placenta, its a miracle!!!" Then everyone will be eating it. It'll be worse than the sac-eater hippies. People will be selling it, they can't get enough, its the fountain of youth people...

I believe we can now refer to people on the edge of public insanity as cruisin' for a Tomdown.

First thing in the a.m. reading this and laughing my pants off! You're a pistol, girl!

I couldn't have put it better my self. Well said.

I was thinking of throwing a cheese and placenta party. Now I have the link to really make it happen.

The really ironic thing about this is that a lot of people will actually go out and do this just because Tom did it...

I'll get you my pretty, and your little placenta, too!

I think it's so ironic that Tom Cruise's baby was born the same day as Brooke Shields', considering their feud.

Well, dilemna over what to make for supper has just been solved. Thanks!

I'm pretty sure we'll be hearing more about the blessed event on South Park sometime soon.

anonymous - SURELY not - SURELY people won't think this is a grand idea just because psycho-freakazoid Tom Cruise did it??? Yeah, if it would save your life, um, well, ok, I guess try anything, but I think ol' Tom can afford to order in from the best places in town. Ew.

lj- Cruisin' for a Tomdown! *LOL* Love it - we'll see it on Entertainment Tonight in a day or two, no doubt!

tickersoid - yes, cheese and placenta - but be sure not to commit the faux-pas of serving the wrong wine or sauce. I'm sure you're going to have an hilarious post on this yourself - I can't wait.

ranger tom - I LOVE Ted Nugent, just for himself - not necessarily his music. I dunno - I'm praying people aren't THIS impressionable. By all means, I think people are too grossed out and emotionally fragile about natural body processes, but this is going way too far.

June Cleaver's Revenge - Wow - I didn't know that their kids were born on the same day - it's hilarious. Hollywood people prolly invite Tom & Brooke to the same functions in hopes of seeing a floor show. But even if Brooke did eat the placenta, she'd still be two-up on Tom: She's actually beautiful and her baby has a hetero daddy.

use the seafood fork on the right

Thank you for clearing that up for me! Altho, personally, I'd opt to eat it with chop sticks and a piquant wasabi soy dressing, ala COOCHIE SUSHI.

Perhaps his dining on placenta is to prevent its precious stem cells from being harvested, like aliens obviously harvested his impulse control?

"Suggested baby gift: a magazine rack, because this child is going to have a lot of issues."

Issues? This child is going to have whole subscriptions!

tam - you've hit the nail on the head - I feel sorry for that little person already!

BTW, I love the turbo-cute picture.

Rabbit: "I should just sit still and look cute."
Puppy: "ZZzzzzzzz..."
Hamster: "This seed is yummy!"
Kitty: "Holy crap! I could eat that little guy before dad could set down the camera!"

Yeah, it's amazingly cute - almost too much so. Baby animals are darling, but they're so high-maintenance. Give me my grumpy old Jack Russell Terrier over a puppy any day!

I think I just threw up in my mouth reading this. I guess I've been buried this week and this is the first I've heard about Tom and his new hors d'oeuvre.

um, you talking about throwing up in your mouth made me throw up in my mouth a little bit. Yeah, it's utterly revolting - I guess you HAVE been under a rock!

A little pepper, a little salt, some garlic. Bada bing. Some nice placenta for ya.

zelda - yeah, what's not to like. and we can all use more iron, right?