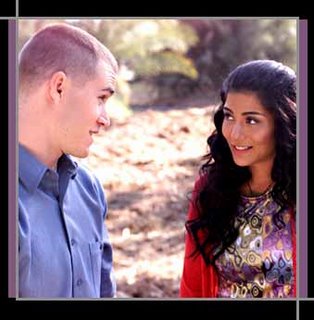 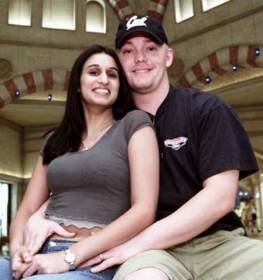 I have a confession to make. You already know I like crap cinema, but sometimes the depth of my depravity goes around the back 40 and laps itself. I'm talking about the doo-doo-mud-pie that is Lifetime Channel. Proudly, I can say that tonight I watched only my second Lifetime channel movie ever, but that estrogen-heavy network is batting 1000 so far. Pegging on the shrieking in horror/eye-rolling/speechless quotient is quite a feat, indeed.
The first Lifetime movie I caught was flipping channels in a California hotel a couple years ago. The timeless gem that had me in ecstasies was a film called Mary & Tim in which Candice Bergen's Mary is seduced by the young buff retarded son of her best friend after the best friend's funeral. I love CB - she's just fun to watch, and all the while I can sense the wheels turning behind her eyes, "good gawd, is this what my career has come to? I was in Gandhi, for heaven's sake!" Good shit. Phlegmmy says check it out!
Then tonight, doing beadwork, I turned on the idiot box and was lured to the Lifetime channel yet again by something entitled "The Princess and the Marine." Paydirt!
Let's get started.
Synopsis - True story about a US Marine (actor sported a fade that needed a bit of a touchup, frankly - see photo top left) who falls in love with Bahraini chick who turns out to be a Cherokee princess - scratch that - Bahraini royalty. Yee haw. The decidedly less photogenic couple on the right, incidentally, are the real-life inspiration for this film.
So, they're in LURVE, and sneaking around ensues, but he's a good guy and wants to do shit by the book and not disrespect her. yay! So, she's got these Bahraini FBI-ish guys in suits with doo-rags and earpiece mics that are following her around. I kept thinking, damn, this Bahraini woman looks kind of La'in. Sorta like a Puerto Rican playing the Mexican Selena. They go to the movies and sit on the same row, separated by friends and empty seats, and the film they go see is "First Knight." Ugh. Translation - that may not have been what the real couple saw at the theater, but First Knight was such a colossal turd that surely it was cheap to reference it in this film. Cheaper than, say, the infinitely superior Killer Klowns From Outer Space. But I digress.
(Confession #2, this is the point where I flipped channels to watch 2 eps of My Name Is Earl, Juliette Lewis ep was great, btw)
So, I flipped back to catch the All-American marine/princess wedding in Vegas and the slap-on-the-wrist ceremony for the out'o'line Marine. This film was released in 2001. I was kinda yawning into my beadtray and wouldn't have even mentioned this here, except it was all made spectacular by the film's post script.
Old doodad girl got US citizenship in 2001, and they divorced in 2004.
I'll let that soak in.
So, long after the movie was released, and on a network that is of- by- and for the movie equivalent of Harlequin romance novels, they bothered to go in and add the tragic fact that this glorious, innocent, wonderful and pure-hearted love ended in d-i-v-o-r-c-e??? Way to kill a bad-movie buzz, folks. I cackled.
Kinda brings to mind the bristling irony of Lady Diana schlepping down the aisle with 100 pounds of meringue to marry a guy who all the world would later hear on tape moaning how he longed to be Camilla's tampon.
Ain't love grand?
And you know it's all made up
How come your face has ceased to be you?
All your doubts and greatest fears
They will be confirmed at the preview
Celluloid has shaped the day
And put the cat amongst the coughers
One business lunch on drugs
Now you're waiting for the next big offer
The Movie of Your Life John Wesley Harding
ADDENDUM: I thought of this just a short while ago. Candice Bergen - who is simply marvelous - lost her husband Louis Malle in 1995, and Mary and Tim was made in 1996, and she was executive producer. Perhaps she did that film to keep herself busy after the loss of a beloved spouse, which is perfectly understandable. And shit, it IS entertaining.
Posted by phlegmfatale at 12:01 AM

Camilla's tampon LOL. She should have realised that all he wanted to do was ride the 2.15 at Ascot.

Yeah, cut to the chase, as it were!

If you get a chance, find "Tim", the original of the movie. It starred Piper Laurie and a young, fairly unknown actor named Mel Gibson in his hot, buff and pre-lunatic days.

I first saw it when I was like 12, and man, I was his number one fan until I found out he was short. LOL

Yeah, well, it wasn't too attractive on screen when his co-workers tricked him into eating a shit sandwich.

But now when I read about Mel pontificating about how his wife is going to hell I think, "ha. YOU pretended to eat shit for money! You whore!"

Your reviews were hilarious. I once forced down a Lifetime movie with Melissa Joan Hart (Clarissa Explains It All, Sabrina, The Teenage Witch) and the late Jonathan Brandis (Seaquest DSV and a handful of real lemon movies that are actually probably Oscar-worthy when compared to the average Lifetime movies).

There was a stretch when it seemed every single Lifetime movie included either Nancy McKeon from The Facts of Life or Meredith Baxter from Family Ties-- the two were kind of interchangeable (kind of like Julia Roberts, Meg Ryan, and Sandra Bullock are interchangeable with Tom Hanks, Richard Gere and Hugh Grant).

Now I think I'll have to go hank myself as I just realized I know WAY too much about Lifetime movies and if that's not one of the few legitimate reasons for suicide, I don't know what is.

attila the mom - really? Poop? Wow - that's the second coporphagia reference in my blog comments in one week - I'm hoping this is not a trend, people! EW. OK. Dookie breath = not sexy, even if it is young strapping Mel Gibson. (Russell Crowe, on the other hand, can have dookie-breath, and I can work around that)

perplexio - Yes, you demonstrate an alarming knowlege of lifetime fu. Yeah, Nancy Mckeon is actually reall pretty, in my opinion. Don't off yourself, after all - one of your blogs is all about reviews, and your job is to take one for the team and be informed for your audience, yeah? So, just chalk it up as fact-finding. Thanks for the share - it was interesting. It's funny, Lifetime films are like the crap Hugh Grant ends up watching with the single mother in "About A Boy." 4-hankie events. Saccharine overload. Ick.

I love Lifetime movies. They're the best ones to make fun of.

Shit. I'd never heard about Prince Charles and the tampon. Fatty Friday I can handle, but this? I don't feel very well.

nongirlfriend - it's good to know Lifetime serves a noble purpose in our society: it's excellent blog fodder.

zelda- wow - I'm amazed - they did a skit on it on Saturday Night Live with Mick Jagger acting as Charles, and his head was superimposed over a tampon that was floating in a toilet. Humiliating in the extreme for the royals, I'm thinking. (Someone was taping their conversation on the sly, obviously). He was still married to Diana, and things were falling apart rather publicly. I think this was about 1994 or 1995. Can't remember.
Funny, and the queen thought 1992 was an annis horribilis. I'll never forget her 1993 New Year's speech saying "1992 is not a year on which I shall look back with undiluted pleasure."

Way to turn a phrase, heifer! That's my favorite moment of her, ever.

The actress that played the girl looks familiar. Nothing says "true love" like American citizenship.

Oh no. No no no. You cannot watch those things. I will not allow this to continue. That means you watch Tori Spelling by CHOICE! What the hell is WRONG with you woman!!!!

Earl did kickass last night, didn't it? I love me some Jaime Pressly. She makes that damn show.

cp - Like I said, it was only the second time in 40 years, ok? No, never watched Tori Spelling by choice, EVER, though I did take an order from her once when I worked at Neiman Marcus.
Joy is my sister's heroine too. She's very funny.

I have Direct TV and I removed LMN and the Lifetime channel from my favorite channels so I can't even SEE IT!!

Earl is so much better to watch Jaimie Presley and Juliet Lewis cracked my fat ass up!! I LURVE that show!

I caught the last 15 minutes of this, as I had heart about the true story awhile ago. I remember reading that at the end...and I was like, "All that for nothing?" Or maybe the culture clash was too much.