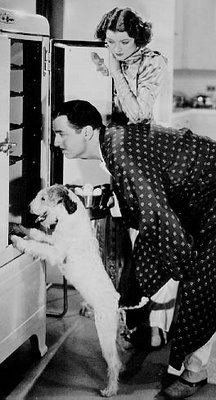 You're wondering what kind of people set me afoot on this planet. My parents are brilliant people, some of the funniest, cleverest you'll ever meet. I grew up hearing them banter like Nick and Nora Charles, sans alcohol, and it did warp me slightly, and I'm always giddy when I come across folks with the ability to play along. Dad loves to say outrageous and slightly naughty things, while mom has the rapier wit which she holds in reserve until she trots it out to make the quick kill. I'm some sort of blend of the two - mom's lighting wit, dad's irreverence, and my very own variety of inability to keep my mouth shut.

Once, I was getting mugged in downtown Dallas (Feb 29, 1988, leap day!), and the mugger said "gimme your purse." It sorta didn't register, and so he grabbed the strap of my purse and said "gimme your fucking purse." I looked him in the eye and said "No fucking way!" He proceeded to beat the crap out of me with his fellow mugger, and I chased them and got their license plate number. That car was pulled over in connection with another robbery a month or so later, I identified him in a lineup, TWICE, and then in court, he got 10 years and a $5000 fine. They told me it was a rarity that a victim could identify a mugger. I think that is just plain stupid - how can you forget the face of someone who assaults you? That is just lazy.

OK, that wasn't an illustration of wit, humor, or brilliance - just my inability to hold my tongue. It worked out ok anyway. My dad got hold of the investigating detectives and kept in touch with them, and I think that meeting of minds had a lot to do with them staying on the case. I've always known that if anyone ever messed with me, my dad would do a Charles Bronson on them. He'd kick their ass till they peed, and then kick their ass for peeing. Then he would stop playing nice guy and get really mean. Maybe that's why I open my mouth too much - I'm just not afraid of anything.

One of my favorite mom & dad stories is when I was a kid and we lived in West Memphis, Arkansas. A friend of dad's called up in the middle of the night - passing through town with a desperate car problem. Dad told him to come over and he'd fix it. Now, it just happened to be one of the most brutally cold nights of my life - the ground outside was completely frozen with an even colder wind chill. The next day, we were scheduled to get new carpet, but the guy with the car problem didn't know that. When he arrived, dad looked at the vehicle, figured out what needed to be done, and went back into the house with the guy. Mom was up, probably sitting in a 3am haze. Knowing her, she was shooting eyeball daggers at this demanding inconsiderate lout for disturbing the household. Mom didn't so much as bat an eye as dad pulled out a box cutter and cut a huge square out of the living room carpet to lay on on the ground under the car. Meanwhile, the guy is shitting himself, thinking that dad just butchered the nice family carpet to help him out, and boy didn't he feel like a jerk? He was sputtering and apologizing profusely to my mom, and she just stared at him blankly. I don't think they ever told him. Wicked wit and a flair for drama. Yup, my folks have STYLE.

So, that's where I get it. This would be the appropriate place to tell you that when I was 12 I got my mouth washed out with soap for teaching my 3 year old sister the word "butthole." Now HER 3 year old says "ass." Don't blame me for that one. That is to say, cursing wasn't tolerated in our household - mom and dad didn't do it, and we were made to comply with that policy. That is to say, too, that the potty mouth thing I thunk up all on my own. I'm just classy like that.
Posted by phlegmfatale at 1:07 AM

Sounds just like my parents. They from the WWII generation also?

My dad always taught me to fight to defend myself, but this was a just a little too much for a skinny 7 year old. Anyway, after talks with the Mother Superior at school and parental conferences went nowhere, my dad, me in tow went to this kid's house. He knocked on the door and when the bully's dad came out, proceeded to beat the living shit out of this kid's dad in front of the entire nieghborhood.

Funny, the bully left me alone after that.

And take a look through my archives sometime. My mouth still gets me in trouble.

"Kicked his ass for peeing." I love it!

Do people really get their mouths washed out with soap? Wow...

ranger tom - yeah, I think I'd love your dad - he sounds sensible to me! I LOVE your blog - it's fun and clever!

nongirlfriend - yeah, funny ass-kicking action. My dad's the nicest guy you could ever want to meet, but he is a giant of a man and not one to be trifled with.

sister - glad you liked it, butthole!

ian - Yup. Mine did. Mom put dishwashing liquid on my tooth brush and scrubbed my tongue with it. As you see, it didn't work.

Well you may have an inability to hold your tongue, but you've obviously got a great ability to hold onto your purse strap. Well done!
Bravo on your folks for being able to complete a joke properly (ie carpet cutting). Too many people fess up prematurely.

I love the story about your Dad cutting the carpet and your Mom sitting stone-faced. What style! What control!

barbara - well, I didn't mention it, but they DID get my purse, finally, when the strap broke and they pulled a beautifully choreographed move to wrest it from my grasp. Not for lack of trying. Yeah, my mom is a cool customer, and dad probably knew she was so pissed he'd better not let the guy in on the joke.

zelda - and oh what a childhood you had - it's worth digging through zelda's blog (about Christmastime, I think?) to read about her childhood - Amazing! But I'll say I think her wit stems from her innate brilliance. Maybe the overdeveloped sense of irony is the product of her weird raisin'.

I know all about that inability to keep the mouth shut thing. I have a tendency to do the same. I think half the time people don't know how to take me because of it.

And that story about your dad cutting out the square of carpet was priceless.

god forbid I ever have a kid - they'll be talking like Andrew Dice Clay by age 4!

I like you a little more after reading this post. Thank God for victims like you. Great job keeping the presence of mind to memorize the plate and your assailant's face. Thanks to you, many potential victims will never become so.

My wit usually stems from being drunk.

o.g. - I think people assume I'm nuts and don't realize what I'm saying. I know what I'm saying, I assure you. Yeah, the carpet story is one of the best of our family lore.

webmiztris - Yeah, I can control the potty mouth long enough to be around nephew and nieces, but otherwise, I hate being on good behavior.

lightning bug's butt - wow - thanks! *chest swelling with pride here* I like the way you make me being a smartass sound like performing a civic duty to fellow citizens. Hell yeah, I was pressing some charges. Yeah, my parents are the best.

nongirlfriend - you say that like it's a bad thing!

Although I have no kids of my own to, I have a nephew who I seem to have on his way.

The other day while talking to his mom I said "shit." We looked at him and you could see the wheels turning!

I'll bet he's heard it before though, heather. Don't sweat it. He'll be hearing worse, and soon!

I've heard that if you stand up to your attackers, then they're usually so caught off-guard, they just stop or you can run away.

My first mouth/soap washing was for calling my sister "stupid."

becky - I think it did freak them out that I resisted, but they still got my handbag - they were only about a foot taller than me, each, and mighty athletic - they ran like scalded hogs after they finally got the bag.

Wow, becky - you totally outdid me on the mouth soap-wash. Stupid - your mom was hardcore!