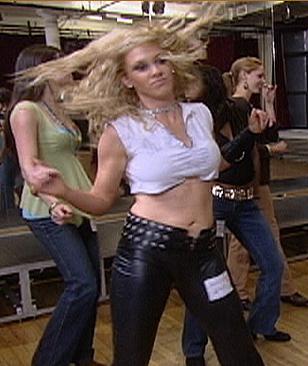 Coyote Fugly.
I was flipping channels tonight and I came across a startling spectacle on CMT, a channel I never normally watch for any reason. Freakishly, my sister called a short while later and said there was a terrible mess on tv that I simply HAD to watch and it was the same thing. Kismet! What riveted my gaze so effectively was "The Ultimate Coyote Ugly Search" which is a reality show of contestants vying to be the triple threat of a hot'n'sexay singing & dancing bartender who can make customers thirsty yet submissive. The winner will receive $25,000, and who knows what else? The CMT series is making stops in several US cities including Nashville, NYC, Austin and San Antonio for auditions.
On the NYC show, the hair-flinging girl in the top pic is dancing her little heart out, but she 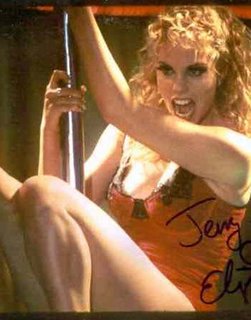 just doesn't quite have it. Rather pitifully, they keep doing the mini-interviews with the girls, and she seems to think she has it all sewn up - that she's the only one performing well. It's very through-the-looking-glass how like the Elizabeth Berkley Showgirls character she is, glazed-over with a naive desperation. I kept expecting her to take her top off at any moment, which would have improved my opinion of her, by the way.
Another standout moment of off-the-mark heartstring tugging was the girl who started crying because the story of the CU movie was just like her life story and her dad just died. Ew. Awkward. Nix on the sad story thing - her ass was cut from the competition forthwith, as she was a crap dancer. Thank you, drive through.
The people thinning the herd of auditionees kept talking about how there are no standouts in the audition- like no one is bringing anything to the table that is memorable. Maybe it's just that these girls only want the exposure of being on television (cue Cartman singing "I'm gonna be on television") to showcase their singing/songwriting talents, but they really need to do their homework and bring a little more than a pulse and a burning desire to the audition. What blows my mind is there is choreography they are taught and expected to perform from the movie - the classic Coyote Ugly dance, and these girls are having difficulty with it. No wonder these bitches seem apathetic - they have a primer available on VHS and DVD, and they didn't bother to bone up on it in advance? Well, they don't really look like they want it at all. Based on what I've seen so far, they need to give the $25 grand to some chick who already is working for Coyote Ugly instead of these lukewarm sorta-wannabes. I'll DVR some more episodes, because I feel I need to take one for the team and watch this mess, so you won't have to. Really, I'm thinking of you.
Posted by phlegmfatale at 12:11 AM

I'll stick with the History Channel.

I occasionally like to watch that kind of train wreck. It makes me appreciate my own life just a bit more.

new lows are always being achieved on television...for me...the best kind of television is a writer coming up with the scene in the most recent episode of "The Sopranos" where the character Chris coldcocks Lauren Bacall (playing herself) to steal her basket of "SWAG"...wouldn't you wanted to be in on that writer's meeting?

I have my BBC tv licence reminder on my coffee table for £131. Thinking of just dumping the aerials.

My God. You are a saint, my dear. To do that for us all. A living saint. That's my opinion.

Ok, I admit I've watched some crappy TV, but I'll pass on this one.

Thank you for taking one for the team.

Great, another pointless show I will surely end up watching.

Thanks for the heads up!

But I bet it's great fun to mock!

Thank you.
Another talent search for talent that isn't there.
I must have been asleep when it became all about shakin' your arse and screeching.
Back to the history channel.

ranger tom - of course, you're right

badpatty - yeah, it's therapeutic. And you're welcome

dick -as I've already stated, the DVR makes it bearable

jerry - wow - Lauren Bacall must be hard up for dough!

tickersoid - yeah, I can imagine what a dilemma that is!

lj - well you know me - I'm all about helping others!

og - you're welcome, and I'll keep you posted!

barbara - sad thing is, it's far from being the most idiotice reality tv show premise!

liz - you're too hard on me

nongirlfriend - yeah, great to laugh at!

patty - you're welcome. Yup, history channel will reap the benefits of all this bad tv!

I've been singing it randomly too for 2 days, but thanks for bringing it up in my comments. I'm going to put it in yours now, too, Mr. Man.

Only redneck CMT watching ladies would cite "becoming a hoochie mama on national TV" to be a career goal.

Utterly scary that this show even exists let alone has willing and eager participants.

I know, perplexio - it makes you wonder. Set low standards and fail to achieve them, I guess.

You should check my blog on myspace- http//www.blog.myspace.com/concupiscence1001; I wrote a piece this week, about the show as well.

I have blog on here too, but it isn't as current as the myspace one, and the Coyote piece is not on here.

I myself, work in a NYC honky tonk, that is several blocks from the real Coyote...and we don't have a script for anything!

Here is the proper link to jo's informative post about the Coyote Ugly Stepford franchise. Her blog is funny too- check it out.