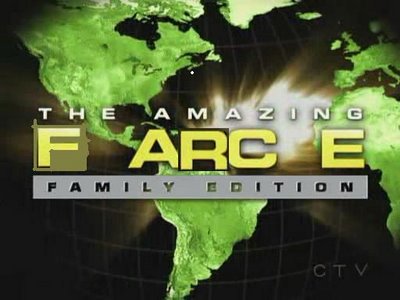 The Art of Ugly Americanism

According to this article in the UK's Telegraph, the US State Department is issuing a broadsheet with tips for Americans to be less ugly overseas. I contend that if we celebrate the culture-crushing idiocy of television like "The Amazing Race" which is all about showing our asses overseas, then there's no use pretending we weren't raised in a barn.

This is a show in which (I've only seen snippets) several American couples are plopped into strange environs (Calcutta, Lima, Moscow) with very little money/resources/no language skills and told to get from point A to point B by any means necessary. Mayhem ensues! The idiotic "heroes" are then filmed as they fight with each other, insult the locals and basically chew the scenery in their path (watch as they gleefully stiff the local cab drivers!) in their effort to win what I assume is a large cash prize.

Well, shit, people, if we treat the world as our own personal theme park, what else can we be called but ugly? This is a celebration of shamefully bad behavior. My opinion is that if you are decent to and respectful of other people, you needn't waste time worrying what they think of you.
Posted by phlegmfatale at 6:08 AM

Angry Joyce and I would end up killing each other on the Amazing Race. These couples start out like a bunch of newlyweds cooing at each other and end up shreiking at each other like banshees. Since we already have shreiking down to an art form, the skys the limit.

You know what PF? We get LOTS of American tourists where I live. Now mind you, they speak the same language (give or take)- and this is my opinion. Some are ignorant boors. Most are nice, decent regular people...courteous too. I've had some lovely talks with people visiting from south of the border...just random conversations that spring up when they're lost or trying to find a good place to eat and have to flag down a local citizen.
On the other hand, no large cash prizes are on the line. That tends to make people of many nationalities act like a--holes.

I saw a lot of that in Europe, it was embarrassing.

In fact, a lot of French thought I was French until they heard my Texas accent. We fit in because we didn't do exactly what you just wrote about.

Isn't that the truth. I've watched the show a couple of times and just shook my head. It's one thing to be ignorant of another culture, it's another to just steamroll in and make a complete ass of yourself.

How I hate reality shows.

fuzzbox - exactly - it turns into just a morbid curiosity to see which couple will break up over the petty baloney. Annoying!

nongirlfriend - good for you - it's the sensible way to travel

ranger tom - there is very little about reality shows that is edifying or redeeming. I'll be glad when they've gone the way of the variety show and nestle inbetween the Donny & Marie show and the Paul Anka Christmas Specials in the tv hall o' shame.

I've never actually seen the show but, I am aware of the idea behind it.
Your last pargraph is exactly how I feel! Anytime I have been overseas, I found myself clamming up. (The phrase, 'Even a fool is considered a wise man if he keeps his mouth closed.') I thought if I said very little, then I can't make an idiot of myself. Wrong! After I left, found out that the people I casually met thought I was a snob. You can't win.

summer - yeah, it's hard to know what is the right thing to do. You want to be friendly, and we Americans ARE loud at home. oh well. I'm just saying other people's homes are not our theme parks. Especially places where there is obscene poverty. Go to Monaco or St. Moritz and be an ass, by all means. Don't be wasteful and obnoxious to people who struggle to get through every day.