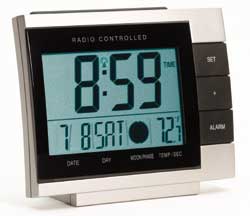 This morning I dreamt I was listening to an ipodish thingie and it started beeping over and over, and I yanked it apart, pulled the batteries out, smashed it with a hammer, threw it into a ditch and it never stopped beeping. Then an airplane sorta gently crash-landed atop the building next to me. Apparently I was dreaming but hearing my alarm going off. For 45 minutes. THAT, my darlings, is why my alarm is on the bureau across the room. I would hit "snooze" every 15 minutes for about 5 hours before I'd willingly get out of bed if I had the option. Maybe if I had a stinky rooster strutting around the place crowing and doing its best Mick Jagger impersonation, I'd actually wake up in the mornings.
Speaking of roosters, my mother-in-law is an adorable kook(when I'm in a good mood - when she's annoying, she's just a hare-brained bitch). She kept saying she was searching 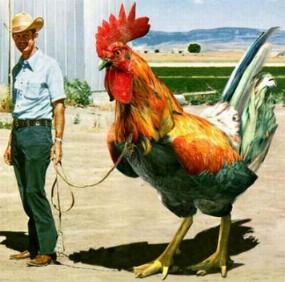 and searching for big ceramic hens for her new kitchen, but they HAD to be hens - not roosters. When we went over, she proudly showed us her first 2 big ceramic hens. Cockscombs? Check. Big, scrotum-like wattles under the beaks? Check. She was crowing about her beautiful hens. Why spoil her happiness by telling her her hens were hims? She is a very well-educated woman, but she has some of the most dingbat ways I've ever seen. She pronounces shrimp "srimp," but mushrooms are mushrooms. Go figger. More on her later.
Speaking of wack alarm clock stories. Waaaay back when I was mere child of 22, I got my first loft in Dallas with a friend. She worked in a salon and the door of a hip local nightspot, and she was always out all night and came home 3 or 4 am, plastered, with intent to get up at 7 am and go to work. Well, fine, whatever. Our loft was large, and my bedroom was a goodly bit away from hers, but you know how the sound of electric alarms carry in a big concrete box? Well, HER alarm would wake ME up and not her. I found this maddening. So, I did what any hapless kitten would do in that situation and used the only thing in my arsenal. She had a separate phone line from mine, and after her alarm had been going off for long enough that it was obvious she wasn't waking up, I would pick up the phone and dial her number. She would wake up and turn off the alarm for the phone. I'd quietly hang up on her and play possum if necessary until she left the loft each morning. Sometimes I would fall asleep before she left. She never knew, I don't think. Ah, those halcyon pre-caller I.D., pre-star-69 days! *snicker*
American Idol watch: Who Should Go Home - that tin-eared Kellie Pickler
Who WILL Go Home - immensely talented Elliott Yamin
Posted by phlegmfatale at 1:09 AM

Thank you for visiting the First Unichurck and for your generous contribution.

We hope you will find the time and the decency to visit us again. We would appreciate your thoughtless submission to our causes and your unquestioning financial devotion to The Faith.

Forever yours in Rusty.

PS - We do offer roosters if you are serious about that.

I could hook you up, if you think that whole rooster thing is a good idea!

I'm with you on the alarm thing. In college, I used to climb down out of my loft (with no ladder), kill the alarm clock, climb BACK into the loft and lie back down . . . all without waking up. Ack.

You are a champion sleeper, my friend! I wake up if someone coughs over on the next street.

Let's hope your mother is not planning to breed those ceramic birds.

I LOVED the MIL story. Best of all that you didn't tell her. We'll leave that to SIL, shall we? Who can also tell her that no one who is anyone has ceramic fowl in the kitchen in California.

My mother says srimp too (but also muSHroom). Makes me want to kick her ass.

oneear - your avatar is a sexy beast! Ummm, I think I'll pass on the rooster, but thanks for the offer. I'm going to try cutting my brutal work week from 3 days to 2 beginning next week, and see how that works out.

badpatty - wow, another offer of a rooster - thanks guys! - but hmm. No. I would LOVE a pet rooster in the house, but husband would be angrier about cleaning up the cloeca products than he is about cleaning my dog's pee up, plus the dog would be extremely unhappy about it. The rooster would end up dead or my dog would have lots of eye injuries - either way is messy.

barbara - wow, light sleeper! mother IN LAW, please note - I'm not genetically related to that - and she hasn't mentioned breeding them, yet.

lj - Yeah, come to think of it, I'll be SIL DID tell her while she was here - she's SUCH a know-it-all! Yeah, my in-laws have a new respect for what a pleasant, charming person I am.

june cleaver's revenge - isn't that WEIRD? I wanna put her in stocks and make her stand there with a speech therapist until she gets it right!

"I would pick up the phone and dial her number. She would wake up and turn off the alarm for the phone. I'd quietly hang up on her and play possum if necessary until she left the loft each morning."

The CIA lost a great secret agent when they didn't offer you enough dough! :)

Shoot, if they'd re-offer the post, I'd probably take them up on it today! So long as I didn't have to wake up early every day!

It's a good thing we didn't have snooze buttons when I was younger, never would have got to work.

Waking up your roommate like that was pure genius. I don't need an alarm clock, as I wake up every morning at the same time. Weird huh?

I consider myself quite knowledgeable about the chickens, but I had an argument once with Vicente about a rooster. I said, "No, it's a chicken. It's not a rooster."

He was very patient but finally said to me, "Chicken, all roosters are chickens but not all chickens are roosters."

I think I must have been drunk but I finally understood.

I've had several alarm clocks who met with shockingly violent ends. But they're useful for practical jokes.

BTW I love it when you bitch about the in-laws from CA.

tickersoid - I'm of 2 minds about the snooze buttons. They worked better for me when I wasn't on anti-depressants.

phoenix - a lot of people are like that. I could wake up earlier if I could go to sleep earlier.

non-girlfriend - hahaha - I wasn't thinking about that, but it's true & kinda cute. I love the little bokkers, and I wish I could have a pet chicken, really.

zelda - I wish I never needed to be awakened artificially. Getting up at the crack of noon daily sounds like heaven to me.

I'm glad you enjoy me bitching about the californians - I LOVE to bitch about them, and they're just asking for it!

My roommate has an rooster crowing sound for his alarm. He frequently sleeps through it. It drives me insane. Our rooms share a wall, so I just pound on the wall in a true barbaric fashion until he shouts "SORRY!" and turns it off.

jimbo - wow - what a pain. roomies can be great, but the disrupting of sleep schedule makes me angrier than the average bear.