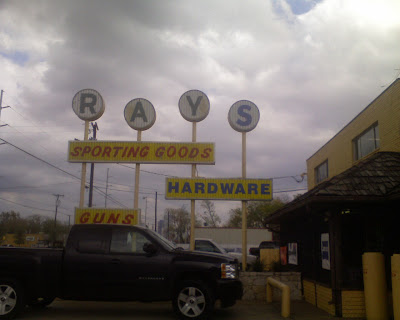 Went to Ray's this afternoon and picked up some 9mm. The place was packed, but the owner - Ray's daughter - called out hi to me from down a long gun counter where the customers were stacked deep.

Borrowed the instructor's 9mm 1911 for the shooty portion of the qualification. I'd never shot it before and didn't practice with it beforehand.

My very first shot was dead center through the crossing of the X.


The first target picture is of the first 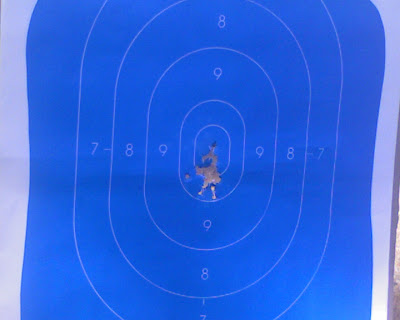 25 rounds I shot, which stayed in a fair group, I'd say. Honestly, I really practice almost entirely with .22, and I'm not super-wimpy, but the larger caliber are more fatiguing for me. Must correct that, must practice more with the big stuff. note to self: GET some bigger pistols. I do shoot my .38 snubby, but honestly, nothing is as fun to me as looking at my target over about a mile of barrel of dad's old High Standard squirrel-blaster. 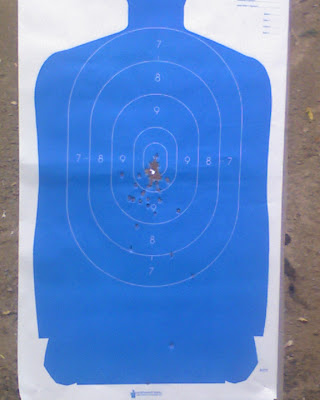 doesn't make sense to me, either. Oh, and if I futz any of the terminology here, mea smegging culpa. I'm going to ride the n00b wave as long as possible when it comes to gun things. I'm trying, but I'm a little shallow, darlings. Forgive me?

Finally, you can see the target with all 50 rounds, 3 of which I dropped. I was anticipating as I pulled the trigger, and had those 3 go off the reservation. Was disappointed, because, honestly, I wanted a 250 score, but 247 is not embarrassing either, is it? Looking at the photo, I just noticed one of my dropped shots is in the neighborhood of the perp's wedding tackle. I swear it was unintentional, but I reserve the right to get creative if I have to reload that many times to stop a threat.

I'm just relieved to have it all done with. It was fun, and not nearly so difficult or intimidating as you might think.

And I shot better than a lot of the guys.

Posted by phlegmfatale at 4:29 PM

Nice shooting, and with an untried pistol, too!

I'm jealous. I shot a 245 on my requal round. I picked my head up on my very last round fired and it went to the right just enough to blow a perfect score.

And another Armed Texican joins the party.

Very nice, and good job taking responsibility for your own safety.

I believe you done good!

I visited my favorite gun shop today. I was looking for the new Ruger LCP...but they had a waiting list of 50 and Ruger is now working on the recalls! Probably be a year before I can get my hands on one! Bummer!

Hell, yes, you shot better than most of the guys! I think the second go would have been a tighter 250.

I've been eyeing one of those Para LTC 9mm pistols.

Methinks the lady doth protest too much :)

Well done, amazing grouping for a first time with that gun.

Well done! I'd be happy with that group (well except for the low blow) OUCH :-)

Keep practicing with the .22 and gradually work up. If you go big early, you will get into bad habits (jerking/pushing, etc.) to compensate for the recoil. Also, STOP when you get tired!

Mental note: Do not cross Phlegmfatale...

Good shootin' indeed. I wish I could shoot that well!

Great shooting. Kinda strange rule since double action revolver shooting is the hardest. Ahyhow, here in Louisiana it dont matter what you qualify with. Congratulations on becoming a sheepdog rather than a sheep.