When I was in first grade, my fingertip was smushed in the hinge of a big heavy bathroom door here. They need to put a little effort into that website, by the way. I wonder if they have a plaque up immortalizing that moment? No? This'll have to do, I spose.

I blame any subsequent bad behaviour in my life on that moment, if, in fact, I've ever actually done anything remotely naughty. Which, of course, I haven't. I'm just misunderstood.

There was a girl in my class who wore froufy dresses to class with lots of ruffles, and she won some beauty pageant and got to ride on the steamboat down the river with all the beauty queens during the New Year's Eve fireworks. I was really jealous-- how could she get to be the cutest girl in Memphis when they must have been aware I was there?

Nap time came daily after lunch. Nap time was difficult for me. Golly, it was the most tedious, boring 30 minutes of my entire life repeated daily. It took becoming (at least age-wise) an adult and having to earn a living to make me crave naps. Sitting still was torture. We sat in our seats, heads down on desks. Other kids seemed to nap, but I'd look around the room sending eye-daggers at the kid who always got the best crayons and then broke them, or wondering if I'd get a chance to 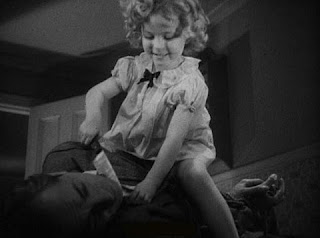 play with the clay that day. Would I make it through the day without being sent out into the hallway or to the principal's office? Luckily for me, the principal seemed to be the one woman in the world who didn't think I was the spawn of Lucifer, so she never paddled me. Yeah, I'd sit there and wonder what I was about to do wrong, next. Then, every so often, something would happen that would remind me that for all my flaws, there were some humiliations in life I would be spared. Every so often, I'd look ahead and to the right and would marvel at the little puddle splattering to life below flounce-beswagged seat of Little Miss Memphis, and I would think "at least I don't pee in my chair."
*Shirley Temple in Baby Take A Bow

Of course, that was a very immature inclination, but I was only 6. I forgive myself.

***Upon its 1934 release, this Shirley Temple film was banned in Nazi Germany for its depiction of gangsterism and gun play.
Posted by phlegmfatale at 12:01 AM

I never got in trouble (too scared!), but I never peed myself, either. So I count that as a win.
Never won any beauty pageants, though.

Never napped or peed my britches but I did turn around and punch the kid behind me in 4th grade. And the schools did believe in corporal punishment applied immediately with no consultation with the principal or parents. Maybe that's why I'm emotionally crippled? All the butt whuppins I got growing up?

Izzat Shirley Temple? With a KNIFE at someone's throat?

Ha! Miss Mem-piss! There IS a God!
That's a sweet Shirley movie - my wife is a big fan of the one with the psycho girl who says things like, "Lets play trainwreck!" and keeps tryign to push the old guy in the wheel chair off...

Uh-oh, Phlegmmy - you shouldn't have bragged about not peeing your pants back then. Two decades from now, Karma may have it's way with you for that, you know. A sneeze, a good guffaw ... you just never know. Bru-ha-ha-ha.

Christina - Good girl! Apparently, you and I didn't win pageants because none of our relatives were self-loathing enough to enter us in one.

Myron - Your mad sailor skills trump the need to be emotionally un-crippled! The world loves a capable man! Butt-whuppins. *shudder*

Buck - your wish is my command - have put up the movie title, links and a bit of trivia. Fascinating stuff

DirtCrashr - Miss Mem-piss? If I didn't love you before, I love you now! LOL! Brilliant. Your wife has very good taste, obviously! Love Shirley Temple.

Lin - Aw, JEEZ. You mean one day I'll say goodbye to the trampoline and jumping on the bed forever? I deny it! I refuse to believe! If I ever pee myself, I'll think of you, promise! :P

That must have been sooooo satisfying!

I love how they announce quite prominently on your old school's website that breakfast will NOT be served. Because that is obviously the most important thing you need to know about the school.

Barbara - I admit, I remember feeling smug. Obviously, it IS the most important thing about the school, right after my finger-smoosh event.