For the beauty of the earth...


Have you ever looked at aerial images of your home on google or mapquest? You really should. 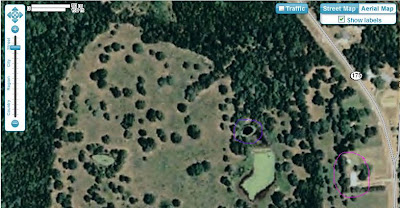 Here's my grandpa's place in the Ozarks, and a larger version. In the first photo, there's a black-ish oval in a purple circle which barely shows up. That's a pond where my brother did most of his fishing when we were kids, and I just tagged along and looked at stuff. You'd be amazed by the giant black ants they have up there. They don't bite though, so they are okay. That's also where I ate tadpoles, which, as everyone knows, are merely raisins-in-waiting. Gritty, though. Took me years to forgive raisins. The pink circle is my grandparents' house which they built in the late 70s, and which, to my delight, has indoor bathrooms. The outhouse is something you really should have experienced, though. Their little old house, built in the late 40s, is concealed by the trees just above the pink circle. There used to be a mimosa tree there which seemed huge to me. I loved those pink furry chenille blossoms. I was amazed when I was an adult to find that the branch I couldn't reach as a child was barely higher than my head. That tree has been gone for a long time, now, though. 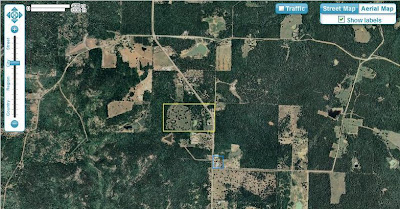 The second photo is a larger version of same, with the above photo area in the yellow rectangle. Then below and to the right is a blue square where the church is that a lot of folks in my family helped to build. WWII vet Uncle Homer was a carpenter and built the pews for that church. I have one of those pews in my home, now, and I'll always treasure it.

You don't get a sense from this image of the undulating terrain, but there was something marvelous about a large American-made car flying along these roads. I always felt like my guts were fighting to catch up with the rest of me. Dad would drive fast, and we'd giggle like fiends in the back seat.

Most of my childhood we lived in the mid-South, Memphis area, and we'd make the two-ish hour drive up to the hills to see grandparents most weekends. Hundreds of times we must have made that trip, but I've only been on those roads a time or two in the past 30 or so years, and yet I remember the entire journey so vividly. A few times, I've gotten on mapquest aerial and started following the roadway from Balfour Road in West Memphis all the way up to the hills, seeing the satellite version of the landmarks I remember, rail lines and waterways being the silent companions of the journey.

Holidays make me think of these trips, too, and of being so alert with the anticipation of seeing loved ones, being spoiled by lovely grandparents, good food and too-rare glimpses of favorite cousins and places I thought of as home. The flat fields of Crittenden County would give way to yet more miles of sprawling cultivation. I always noted when we passed one particular place where the property was dotted with disused freezers and fridges, portholes cut in to accommodate nesting yard birds. Recycling, anyone? Usually, but especially at holidays, Dad and Mom would have classic radio music playing from an oldies station, lots of Bing Crosby, Benny Goodman and the like. That was the sound of home, too.

I hope your Thanksgiving is full of good memories and warm times with dear ones.

Thank you for reading my blog.
Posted by phlegmfatale at 12:01 AM

Good memories are always worth reliving :-)

Thankful that you're in the blogosphere. A blessed Thanksgiving to you and yours and the puppehs! ((()))

Coming out of lurking mode to wish you a vereh Happy Thanksgiving!

Happy Thanksgiving, phlegmmy! May your cornucopia runneth over... :)

We're all thankful that you're here.

Happy Thanksgiving Ma'am. Enjoy this beatutiful North Texas day and know that you are appreciated.

Happy Thanksgiving to you and yours, Phlegmmy!

No thanks required for reading you, ya know. You've got one of the most creative, warm, and delightfully mad (in the Brit sense) blogs in the known universe (I can't speak for the unknown universe -- See D. Rumsfeld, re: known unknowns, et al). Shorter: MY pleasure!

I've Google Mapped all the places we lived and played that I remember. Remember to do it many years from now. The changes I see are amazing.

And thank you for being here for us to read, kiddo.

I leave you post-thanksgiving good wishes. Your blog is new to me; I came to it via Ambulance Driver via Boobs and Injuries, via Post Secret. I hadn't been a blog reader before. Yours is fun and intriguing. Thanks, Barbara Elizabeth