The Toothpick Test
Chapter Seven
Okay, obviously we're in the home stretch.
My meatspace job babysitting adults pulled focus this weekend and the last of my little toothpick excursion will be very whirlwind. I'll no doubt be skipping several significant elections in favor of focusing on elections since the advent of the television age. As I said near the end of the last chapter, the Toothpick Test is about the perception of authenticity. The public can be a very stupid thing (mobs, anyone?), and the whole "perception is reality" can be particularly frightening in light of that fact. A great many factors shape those perceptions. Eddie Izzard said perception is 10% what you say, 20% how you say it, and 70% how you look when you're saying it. Case in point:

1960 Election
Democrat John F Kennedy vs Republican Richard M Nixon
Nixon served as Veep for two terms in the fifties. That he would be primed for the presidency after Eishenhower retired would seem a no-brainer. However, the 1960 debate in front of live cameras spelled the unfolding of a whole new vista in the way presidential candidates were vetted by the voting public. Previously, voters assessed candidates on public appearances, newspaper and radio accounts of same. Various accounts I've read of this debate mention Nixon's sallow, peaked apperance contrasted with the youthful, vigorous countenance of JFK. In black and white, I don't see the paleness they mention. What is evident is that JFK is very comfortable in this medium, whereas Nixon is almost fidgety and is awkward. Surrounded by cameras, there were no doubt many distractions 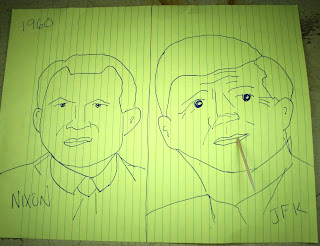 in the studio, and yet JFK remains cool, focused and on point. Kennedy looks straight into the camera, unblinking, while Nixon's eyes scan between the moderator and the journalists, making him look shifty. Nixon doesn't look terrible, but he does look nervous and seems by comparison lacking in confidence. If you got on a commercial flight and the captain's voice came on the intercom and they sounded nervous and uncomfortable, would you be confident in their ability to fly the plane? Not likely. Nixon didn't speak badly, but his discomfort likely made a lot of people feel he was not ready to take the reins of our nation, despite his extensive executive experience. Kennedy's steady gaze and obvious comfort struck a stark contrast with the profusely sweating Nixon. The net effect is that Kennedy took the toothpick prize.
Watch a clip and see for yourself:

Perhaps Nixon's fidgeting and discomfort was related to knee surgery just a couple weeks before, but you wouldn't know about that from the video. Appearance plays a major role here. Many who listened to the debates on the radio felt Nixon had been the clear winner, and yet those who watched the debate came away with a very different conclusion.

The race that year was brutally close. Times were changing, and while Nixon represented a staid, old-guard philosophy, Kennedy put forth a progressive ideology with much more government involvement in various aspects of peoples' lives in the form of programs. The race was close all along, and in the end, Kennedy barely edged out Nixon. JFK won by a scant 0.2% of the vote. Nixon's supporters challenged the results in 11 states unsuccessfully, while JFK's supporters prevailed when they challenged Nixon's victory in Hawaii. Despite what must have been a grave disappointment, Nixon was very dignified throughout the process.

Ironically, the seed of the Kennedy family wealth in the US was JFK's grandfather's saloon, and Nixon was the son of Quakers who eschewed drink and chew and women wot do. All America wanted to do was have some fun, canoodle with Marilyn Monroe and have sex in White House closets. Ya know: find what you're good at. Looking at the mien of the two men, it's very easy to imagine people considered JFK vastly more youthful and forward-thinking, although he was only 4 years younger than Nixon. Obviously, many times we vote for the person we hope someone is, rather than who they actually are.

The distressing thing about this way of judging candidates is that appearances can be so deceptive. Some have speculated that in an age of television and radio, a person with the grating voice and stultified delivery of Abraham Lincoln would never have been elected to national office. There are, of course, such oddities as Barney Frank who find their way to D.C. on our dime but generally, the cool customer will inspire more confidence. Anyway, maybe going on appearances and delivery rather than carefully examining the record of all candidates is just a trifle superficial. Based on who-knows-what, some Americans have been convinced that one certain candidate will be filling their gas tanks and paying their mortgages. I wonder if such people will be angry when they find out they still will be ponying up the dosh at the gas pump and with their mortgage company, regardless who was elected? *sigh*
Posted by phlegmfatale at 10:57 PM

Wow. Look at Nixon sweat! I agree that appearance trumps substance to a frightening degree nowadays. It's why I'm glad I don't have tv, and can read transcripts of debates online, etc.

Poor Nixon. He was sick and his fever broke on the air.

Phleghmmy, I have a favor to beg. I need people of intelligence to read my last blog post and say something smart (either good or bad) about it.