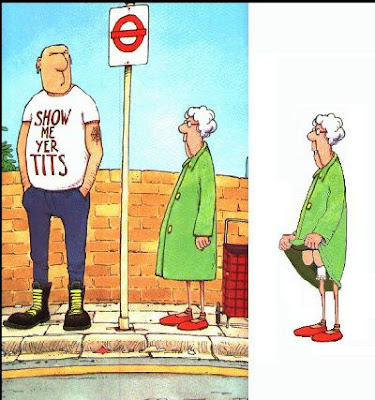 From the I-would-rather-not-have-known files comes this golden chestnut from a couple years back. A girlfriend in real estate mentioned to me recently that an old folks community somewhere had taken on a sort of swingeresque atmosphere, and sexually transmitted diseases were spreading like wildfire among this geriatric set.

I mean, can you imagine Marge, Flossie and Willard all coming down with crabs or chlamydia or who-knows-what? *gack*

So, I googled it, and sure enough:

STDs Running Rampant In Retirement Community
Doctor Blames Viagra, Lack Of Sex Education
Now, this was in Orlando in May of 2006. Uh, lack of sex education? If they don't know by now...

Local 6 featured Louis Franklin, who used to date in the community at least three times a week.
"I have had a better dating life since I have been here than I have ever had," Franklin said. "I know there are things going around."
A doctor blamed Viagra, a lack of sex education and no risk for pregnancy for the spike in sexually transmitted diseases at The Villages.
"All I can repeat are the things I have heard which are things like, 'Should I bring the little blue pills over tonight?'" community singles group president Richard Matwyshen said.

I'm imagining the cast of Cocoon frolicking sans raiment, running along moonlit beaches and falling into disturbing tumbles of ... well, you get the picture.
Pass the brain bleach, please.
Posted by phlegmfatale at 12:01 AM

Looks like in addition to Bingo nights and chair exercise sessions, they should offer sex education classes in retirement communities. :D

I hate to be the lone dissenter, but, when I am eighty I want to still be getting it on. Will the twenty-somethings still like me than?

Oh no! Dad was right. He always told me:"You go at life like old people f****! Without fear nor caution!"

vinnie - Well, there is that.

And yeah, why the hell shouldn't people make the most enjoyment out of their life as long as they are able? I have no problem with that. It's just the thought of octogenarians suddenly turning slatternly that boggles the mind. And again, hygiene, dearies.

MY EYES! MY EYES! IT BURNS! AAAAARRRRRGGGGGHHHH!!!1

aepilot_jim - Can we turn back the clock to the time before we knew of this story, a time of innocence? *hee hee*

STDs aside, yet more evidence I'm living in the wrong place. I remember reading this article when it first came out and shaking my head from side to side in disbelief... as in "old enough to know better." I suppose the corollary "young enough not to care" kinda sorta fits in, somewhere.

As for geriatric sex... we oldsters get on quite nicely, thankyaverymuch. And if you young whippersnappers are lucky you'll get here, too. Unless you do the Daltry thing ("Hope I die before I get old."), which, from my POV, ain't highly recommended. ;-)

I agree use the wisdom that age offers and wrap it. And dont tell your children about it!