Through a dealer I found a strand of beads hewn from lava. !
I know!
Isn't that cool? 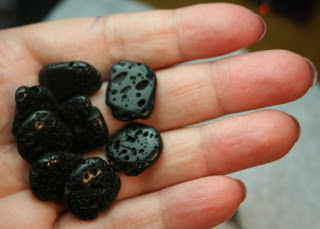 They are porous like pumice but seem to be sealed with some sort of waxy resin. It's also polished to a smooth surface.

When I saw these, I knew immediately they must be paired with irregular large white pearls and strung on black silk. 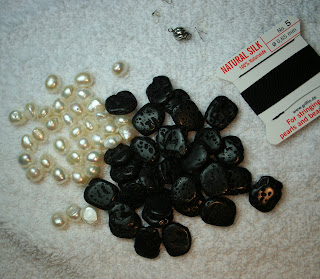 The problem with the irregular surface of the lava is that some holes were bigger on some than others, so they wouldn't be stopped from sliding by the knot on the silk, so I happened to see a nearby strand of faceted quartz beads which I just used as spacers to stop the lava from sliding.
The clasp I bought at a lovely bead shop in London near Covent Garden about 8 years ago. This is the best bead store I've ever seen. I have a few other findings I've hoarded from one of those shopping trips, but they won't last forever. 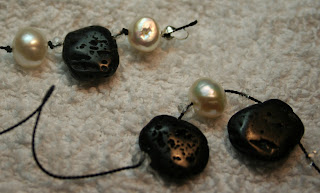 I'm going to keep this necklace and wear it. I can't remember the last time I made myself a piece of jewelry, but it's been years. I'm concerned about how easily the lava beads may fray/cut the cord. If they are tight enough that they won't slide, then it won't matter. I definitely don't want to sell something like this to anyone until i know it won't fall apart easily. 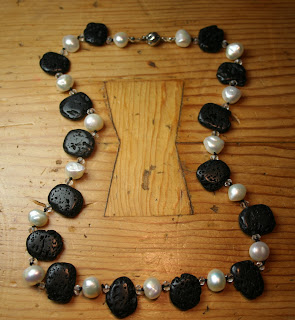 Oh, and I'm wearing these to my CHL class tonight. Nice, yes?
Posted by phlegmfatale at 12:01 AM

Looks like that would go smashingly with an ivory-handled Colt... ;)

It's stunning...but why haven't you made more for yourself in the past?
I think that's a little sad.

I like it. It's a good thing I don't live near you, or I'd go broke trying to buy all your jewelry :)

This has to be the most unique an awesome piece of jewelry I have seen in a while. The different textures play well off each other as well as being contrasting colors.

Depending on the type of lava the beads were made from you might not need to worry as much about it splitting the silk.

jay g - what wouldn't go well with an ivory-handled Colt?

captain - thank you for the compliment

christina - Aw, that's not sad. I have a few pieces of my own work I wear, and I have plenty of jewelry already. I'm more thrilled to get it out there and onto other people. :)

becky - Glad you like it. We'd have to come up with a barter, I suppose, becky. Maybe we could trade jewelry for dog-sitting. Or dog TRAINING!

minikat - wow - thanks so much! Well, i'll see how it wears. It'll prolly be okay. Thank you for the kind words.

I am taking an Earth Science class at the moment, quite dry...but if the Prof. brought lava beads into my class, I would sit up and take a bit more notice :) Very cool. Love your new picture by the way.

I really like the contrast. I'd wear the lava, perhaps mixed with some wooden beads (sandalwood?).

I am happy to report that I am now the adoptive mommy of this gorgeous and unique piece of jewelry...
I am completely amused and bewitched by this necklace... it was love at first sight!!