Bryan (who looks to me an amiable sort, with his surrealist bow-tie) campaigned rigorously against the nation's business elite, hoping to appeal to the common man. He ran twice against McKinley in 1896 and 1900 elections, losing both handily. 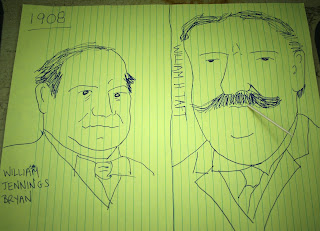 Roosevelt refused to run for a second election, but endorsed Taft as a progressive. Taft cannily co-opted some of Bryan's reformist ideas and muddied the waters with voters, blurring the contrast between the two parties and winning the election.


This was the most crushing defeat of Bryan's three presidential runs, but he would later be named Secretary of State under Woodrow Wilson.

Taft bears the distinction of being the last moustachioed American President.

Wow. What a hairball!

Theodore Roosevelt refused to run for a third term in 1908, but had heartily end 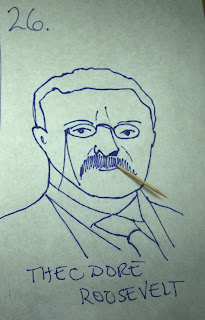 orsed Taft as the Republican candidate. TR was so popular that, of course, his endorsement was good as gold with the American public. However, TR was miffed that Taft did not follow through on his reformist agenda, so he challenged Taft for the Republican nomination in 1912. Of course, as sitting president, Taft controlled the convention and handily won the nomination of the Republican party. In what surely was a flurry of earth-pawing redolent of heady musks, Roosevelt broke away from the party and formed the big, swinging Bull Moose Progressives. That's when it all went rodeo. Taft wasn't really a politician and only ever wanted to be Chief Justice of the Supreme court (later appointed thus under Harding), and he refused to go in attack mode on his former mentor Roosevelt. If Roosevelt had won the Republican nomination, it is widely believed he would have won the election, but it turned out the Republican vote was split, giving the advantage to the Democrat candidate. This election set the tone for the Republican party for decades to come, setting in stone the notion that Republicans would not be reformist or progressive but generally more conservative in nature.

With the country in the throes of major industrialization and labor movements, a chari 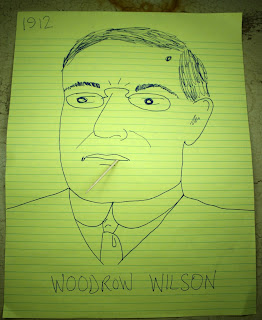 smatic Socialist ticket leader garnered a lot of attention and votes. Eugene V Debs as the fourth serious contender further diluted and split the popular vote. He doesn't get a portrait done by me. Neener neener neener.

Democrat Woodrow Wilson, former president of Princeton University, won the election though not with a majority.

I'll tell you a secret: where I'm going with the whole toothpick thing is that this little implement is symbolic of authenticity. Here we have a contest between four men, two of whom have already passed the test with the toothpick. How could Wilson prevail over Taft and the ever-popular Roosevelt who've already passed the toothpick test? Because in the court of popular opinion, the notion of character is ever hanging in the balance. Trust is a fragile thing and like a soap bubble, once burst, the pieces will never be reassembled. In 1908, Roosevelt endorsed Taft as the next and only choice for the presidency, yet four years later he ran a vigorous whistle-stop tour decrying him and asking to be given back the presidency. This surely must have exasperated many a voter. Some voted for Teddy, and some voted for Taft, but the turn-on-a-dime factor of this Republican infighting must surely have driven tremendous numbers of votes to Wilson. Wilson stayed above the fray and let the also-rans duke it out and knock themselves out of the race. Thus, Wilson appeared the most authentically decent and down-to-earth to the greatest number of Americans who voted in that election.

Authenticity. Once people collectively think you are full of crap, it's almost impossible to ever change their minds.
Posted by phlegmfatale at 6:47 PM

In the interest of the Vote and your historical theme...check out my blog to see a piece of womens history and the crap they endured so us ladies could exercise our right to vote today.
Another fine example of spirited and courageous broads making history.....NO excuses for not voting!!!!!

Dear Superior Scribbler: Sorry for the "canned" and unrelated nature of this comment, but I wanted to get to as many of you tonite as possible. One of the things that we at Scholastic Scribe are most proud of is the Silly Sunday Sweepstakes. Several of you are already familiar with the arbitrary and quite inane weekly attempt at humor...for you, and for those of you who have not yet played Sx3, I urge you to drop by Sunday to see what's up. Oh, and congrats on being named a SS. You earned it!

Squee! We're back with the yellow lined paper. I don't know why, but it really adds a certain je ne sais quoi.

And authenticity! Amen. Sarah Palin has it in spades.

Woody doesn't look like the toothpick type. Maybe his wife did. She covered for him the last part of his term.

schnoob - you are welcome, my dear!

christina - so pleased to know you are delighted by this. Agreed on la Palin.

somerled - I agree - WW was very dapper and oober-groomed, but the point of that election was that two eminently toothpickly guys were able to blow their own credibility...