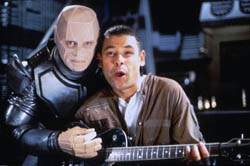 I love love love the stuffing out of Red Dwarf, the British outer-space comedy series. The writing is absolutely brilliant and the acting is spot-on. This, for me, ranks with Star Trek as all-time best tv space series.

The two lowest-ranking people on the vast mining ship Red Dwarf, Lister is a charismatic rule-breaking happy-go-lucky loafer and his roommate Rimmer is a super-dorky by-the-book loser (picture a nakedly ambitious Barney Fife with a yellow streak a mile wide) . Lister is fired and put in stasis before returning to earth for bringing a cat on board the ship. 3 million years later, Lister awakens from stasis to find that all humans on the ship were turned to little piles of powder, and that he is the last living human. Anywhere.

Holly, the ship's computer, has slowly gone mad after twiddling his thumbs for 3 million years. He's adorable - a disembodied head floating on a vid screen. The pregnant cat had her babies on the ship and from them a new life form emerged - a vain dandy James Brown type called Cat.

Turns out the ship's computer has just enough juice to support one hologram of a former shipman as companion, so the perennially dim Holly has chosen neatness freak Rimmer, who constantly harasses Lister about his slob ways. His hologram status is the reason for the H on Rimmer's forehead. Kryten (the android pictured above with Lister actor Craig Charles) is a service android who is picked up a ways into the series from a wrecked space ship. Kryten has a groinal socket for cleaning attachments - you've go to see him vacuuming the place to really appreciate him.

Opening episode of season 7 was Tikka To Ride, in which the ship runs out of curry, which is a disaster of epic proportions to Lister, who is partial to a chili-cheese-chutney-egg sandwich. They manage to travel in time to re-stock curry supplies for the ship, and end up in Dallas Texas, 1963. They accidentally prevent JFK's murder, and he goes on to be prosecuted for crimes and leaves office in manacles. Our heroes travel in time yet again and tell JFK how badly things will end for him on the tarmac of Idlewild airport in NYC. JFK is utterly downtrodden and Lister tells him that in their version of history, JFK died a hero, and this very airport is named after him. Anyway, turns out, they take him along to travel in time yet again and JFK is the mystery gunman on the grassy knoll.

What's not to like? Oh, and the dialogue is brilliant.

Rimmer: We're going to have to switch to Red Alert!
Kryten: Are you sure, Sir? That will mean changing the bulb.

Check it out on Amazon or at the Sad Geezer's Guide to Red Dwarf.
Posted by phlegmfatale at 4:02 AM

Have you heard that Craig Charles is in a spot of trouble for allegedly smoking crack cocaine?

Photographs in the Daily Mirror show him smoking crack in the back of a car during a journey from London to Manchester.

As a result, he's been suspended from his BBC music show and his role on Coronation Street.

I've never really watched the Red Dwarf enough to know that much about it.
One thing of note you may or may not have known. When British comedy came to the US, guess which city was their test market?
Good old Dallas.
Who would have ever figured that a bunch of rednecks would have embraced it so well.

Oooh, a new Britcom! Can I catch it on BBC America??? I'm addicted! I also like an Aussie sitcom called Kath & Kim. Too f'ing funny!

I had no idea Red Dwarf was on that long. I saw most of the first season, as they aired it on Public television here for a couple years. But now, I have no idea where to watch it.

I love how the cats all mutated...

The show is incredibly funny, sarcastic, and imaginative.

I have never seen a britcom I have liked yet...but I'll give it a go.

Why the hell not. You made it sound funny. *L*

mj - that's terrible news - Craig is such an adorably freaky man. LOVE. HIM. Wish him well - someone who is that acutely ironic has got to have some huge sadness, though.

dick - Wow - I didn't know that about them US test-marketing britcoms in Dallas first. Makes sense, though, since we are hip-deep in off-beat eccentric types.

ms. m - well this one is not new, but you buy the dvds on the amazon link I provided and lots more pics and info are available on the Sad Geezer link I put in this post. Enjoy!

phoenix - uh, season 7 was what? - 6 or 5 years ago, or so? I think it went through 9 seasons, but I could be wrong - again, refer to Sad Geezer for more accurate information. Yeah, it's a brilliant flight of fancy.

My Favorite Eps : Polymorph II
Back to Reality, Tikka To Ride

cp - this one is so delectably silly, I hope you find something in it to enjoy.

I've read Dwarf, (heh) but still need to see it. Guess it's off to Amazon with me, then...