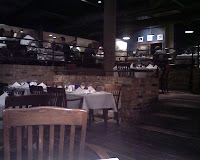 Wednesday I decided to check out Newport's Seafood restaurant in the Brewery at the west end of downtown. I thought it might be a little pricey for a weekday lunch, but I was sure it would be good.

I was not disappointed. I had a dish of scallops, artichoke hearts and linguine with a sun dried tomato and goat c 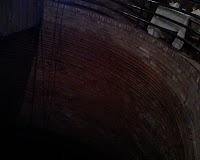 heese sauce. It was fantastic. The dish and my iced tea came out to a smidge under $20, but it was an impeccable dish, so, I think it was well worth it.

But the restaurant itself was an amazing place to see. I had no idea of the history. I used to go to the Starck Club in that building, The Brewery, in the 80s, but I had no idea there was a well in the building. The well is a circle of bricks 31 feet wide, and stair-stepping like an inverted staircase, opening the well wider as it goes deeper. I had something to read with me, and I 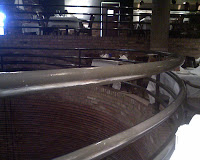 was seated under a very good light right by the well. The well is about 55 feet deep and there is about 35' of water standing in the bottom.

At the end of my meal, I took a few photos with my phone. I felt a bit nervous that I'd drop my phone in, sort of the way the Grand Canyon makes me feel like I'll just suddenly go nuts and fall in for no particular reason, and so I stay well away from the edge. Nervous or no, I took one for the team - I was thinking of you, really!
Posted by phlegmfatale at 12:01 AM

...makes me feel like I'll just suddenly go nuts and fall in for no particular reason, and so I stay well away from the edge.

Ah... acrophobia. I'm a fellow sufferer. Once upon a time in the long ago climbing was a condition of employment... and refusing to climb left me vulnerable to an all-expenses paid stay at Fort Leavenworth's Graybar Hotel. So, climb I did. I left my fingerprints in, not on, radar antennae all over the frickin' world...

Thanks for "taking one!" Great pics, and narrative.

Looks like a cool place...Ilove it when they get resourceful and repurpose old structures....Lunchie sounded lovely too!!!

Are there fish down there, piranhas and alligators? Does a pendulum swing through it's space?