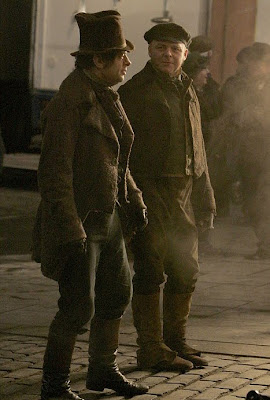 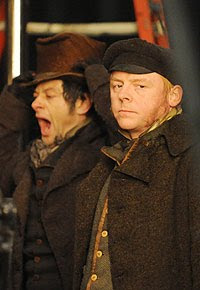 I fully expect the film Burke and Hare (starring Simon Pegg and Andy Serkis in the ubiquitous roles) to be monstrously good fun. I'm squirming with delight that Tim Curry will also be in this film. *squeee* [yes, I-- had a flat, well-- how 'bout that???]
Set in the early 19th century, the film is a black comedy about Williams Burke and Hare, notorious graverobbers who procured fresh er, uh-- subjects for doctors to use for the study of the innermost workings of the human body. Apparently, they were serial killers and, well, didn't want to dig so deeply for fresh material, so the Irishmen created some corpses of their own for Edinburgh doctors.
This film also features Tom Wilkinson and John Cleese. Can't wait!
Oh, and I mentioned it before, but Andy Serkis was brilliant in the BBC production of Little Dorrit. He's manages to make diabolical delicious, somehow. Amazing how charismatic he truly is. Check it out.
Posted by phlegmfatale at 12:01 AM

You mean that Tim Curry?

oooohhhh...thanks for the head's up!!!

Before he had to drop out due to a possible post-Leno debacle 10 PM series pick up with NBC, David Tennant had Andy Serkis role.

Simon Pegg and David Tennant playing off the rest of that cast would have been even more fun. Sadly, it was not meant to be, but something tells me that Tennant will show up in the final Pegg/Frost/Wright "Blood & Ice Cream" flick, "The World's End".

Oh. My. GAWD I have have to see this. You have NO idea.