Of Mice and Spam Tins... 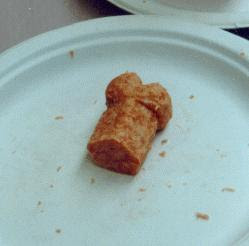 Bayou Renaissance Man has a post up about the cruel and unusual rigors of war in which an unfortunate lot of troops were compelled to eat only meals featuring spam for a spate of 42 days. Talk about trials in the wilderness...

This reminded me that one of the things I love about Seattle is that around Mardi Gras, they have a traditional Spam carving competition. I thought originally the Spam carving competition was associated with my beloved shop Ruby Montana's Pinto Pony (I still have my floaty pen from there!!!), but apparently it's a Seattle thing in general. By the way, here are photos from the 2007 competition over at Aardvark Art Glass, where an incredibly clever beadmaker shares her whimsy with the world. 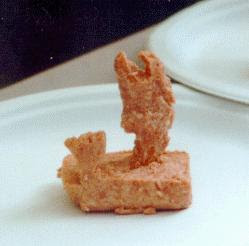 Here are a couple previous entries. I thought the top was one half of a dogbone, but it apparently was Exhibit A from the trial of Lorena Spammit.

The other carving is Spamon, a fish prized in the Pacific Northwest where it valiantly swims-up-can to find its baby daddy, only to get reeled into a cold, cruel shopping trolley and finally to a grave of paperplate and over-processed bread product. Still, it's majestic to see them in their native habitat.
Posted by phlegmfatale at 12:01 AM

I like Spam, although this is apparantly considered an aberration by some; especially my brother. One of my favorites is to batter it with corn meal and fry it.

I thought Exhibit A was a Spam wine cork...I still prefer to think of it that way...

Man, that first one is shades of Ms. Bobbitt!