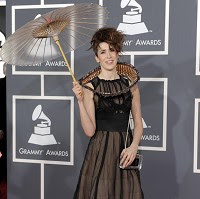 Any more, award ceremonies are so rife with unsurprising outcomes that I haven't bothered to watch them in yonks. I was, however, delighted to learn that my beloved Imogen Heap won a Grammy last week for best album production. Her win was historic in that she is the first female ever to have won this category for engineering her own album. Then again, she's been programming since she was a wee lass, so it's unsurprising she is a whiz at it. :)

She wore a Twitter dress, which was a bit more understated than her previous Grammy appearance with the frog-and-lilypad affair. I thought the lilypad thing was cute, and it captured the whimsical maverick spirit I associate with her music. Apparently, she'd thought the Grammys were a fancy dress occasion for sartorial license. I'm on team Imogen in that respect. The large eye-shaped cowl you see around her neck from this's week's Grammys is an LED light strip which has a live feed looping of Twitter comments from her fans. At the same time, her clear handbag held a little tv which was showing live feed of images sent by her fans. She said she wanted to bring her fans onto the red carpet with her.
Imogen is a remarkable artist and I think she would be doing this even if she never made a penny off it. After a launch with the industry that wanted to bend her unerring vision to executive wills [still yielding the enjoyable I Megaphone (clever anagram for her name, btw)], she sold her London flat to raise the money for her own small studio in which to produce music to her own standards, the lovechild of which was the superb Speak For Yourself. Quite, dear. That makes it so much more gratifying to me that she is recognized by the music industry in spite of itself.
Side note to all of this is that despite some very, very good things happening, the last few weeks have been a pins-and-needles affair for me. I've kept Immi's Ellipse on constant rotation in me chariot, and it's been cathartic to sing-- and occasionally howl-- along. Superb cd, this is. Here's a link to Ellipse where it's currently $10.89. Bargain.

On December 2, Imogen was on stage at Webster Hall in NYC when she learned she'd been nominated for this award. Here's a video of Her Adorableness. You can see her girlish delight at being nominated, even musing "I wonder what I've been nominated for". And this is exactly how she is on stage. She chats sweetly as she fiddles with cables and gets things set up for each new song, and I always feel like it would be perfectly natural if she turns around with a huge tray of pretty, flowery mismatched cups of tea to make everyone feel at home. What a darling soul.
I'm thrilled for her. Truly, I am. I'm smiling.
Posted by phlegmfatale at 8:33 AM

The technical details of the dress from the engineer's blog:

The display in her purse is actually an iPod Touch. Literally, as the commercial says, there is an app for that.

I work on an iPhone/iPod Touch app for my corporate masters. Our project is a disaster, but I've stuck it out in order to pick up the (expensive) training and experience.

I wanted to thank you for introducing me to Imogen's work; I've really enjoyed her music. She seems like a very warm, very friendly person, and I think you're absolutely right about the idea of her serving tea to the audience. I'll be keeping my eyes peeled for upcoming concert dates.

Immogen's an incredible, truely gifted talent - and yet you just have to believe her best is yet to come! I've had the chance to see her live three times (twice in Dallas and once by great chance in NYC).
Enjoyed reading your Blog.