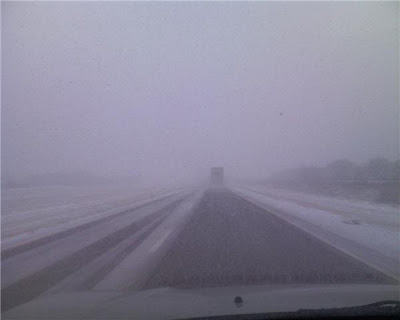 After I woke up Thursday, it started snowing and it hasn't stopped since. Here's a picture I snapped just a few miles into the commute, before the roads were very much covered. Now there's a thick blanket of snow on all the roads, and I'm sure there's melted snow underneath which I expect will be a sheet of ice by drive time Friday. Halfway to work yesterday, I nearly slid into a ditch, so I called work and told them I was heading for the hacienda.
On the way back home, the world was blindingly white and this seemed eerie and hypnotic. I was amazed by the beauty of this rugged landscape with its mesquite brambles and pumpjacks encrusted in downy tufts of icing. I was so happy to be in the blinding white, rather than the dirty, grim sludge that city snow quickly turns into. This was actually quite peaceful.
Don't know if I'll make it in to work today, or not. I hate to miss work, but I don't want to spend half a day in a ditch in my car, so for now, me and the best dogs ever are safe, well-provisioned and warm at home. I hope this post finds you cozy and safe, as well. :)
Posted by phlegmfatale at 12:01 AM

There are flakes of snow mixed with the rain down here at the coast this morning. It's too warm for any accumulation, but it's something to see.(Us folks here are fascinated by snow.)

You made the right call! Work is never worth the risk.

I can hardly believe the insane weather you are getting down there!

Drive careful! And enjoy the snow from somewhere warm, or dressed warmly!

You're getting more snow there in Texas than we are up in Boston.