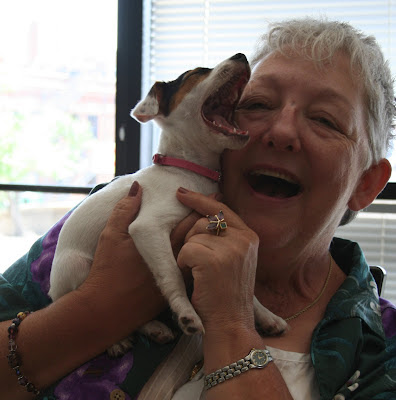 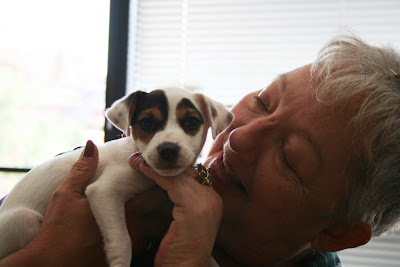 A neighbor stopped me yesterday and told me his girlfriend wants to abduct my puppeh. I said she'd have a fight on her hands.

Took Praline to the vet on Monday for her second round of shots. Dr. Parker came by the desk as we were checking in, and said "oh, that puppy is going to get some very unattractive spots, I can tell it's going to be an ugly dog. You'd better leave it with us," and he grinned, besotted. Says I "you think you may be able to find a home for her, one that would overlook her deficiencies?" He said "I do."

She proceeded to do the little charmer routine with all the people in the waiting room--even the cat people. Everyone just grinned like a bunch of loonies at her. She's just like that, my doggie is.

In the exam room, they took her temperature and she did protest much, howling like they were skinning her alive. Poor baby. The shot wasn't much better. Thank goodness they trimmed her little needle claws before the other indignities. She was figuring out about them. Various assistants kept coming into the room to coo and giggle over her. They all had to hold her. Most brought treats.

Time for the doctor to come in, and the two vets drew straws to see which would get to examine my puppy. She sat demurely, patiently as she was examined, primly crossing her front paws at the ankle as she lowered to her belly on the table. She's got great style.

As of today we can go to the dogpark and meet other doggies. YAYS!

Breda linked a Nellie McKay song earlier this week, and she has the best dog song ever. It fits.

Just from her photographs one can tell Miss Praline is adorableness cubed, so of course in person her sheer kewtness must be almost overwhelming. I'm not surprised at all!
Have fun at the dog park. Let her chase down some Italian Greyhounds, it'll be good for them.

Cool song. I hope it's for cat people as well.

An adorable Miss Parline she is and does deserve the attention;) Have fun.

that IS the perfect song for you and Praline! =)

And oh, that 1st photo! Precious. They look like they're having a good belly laugh together.

Miss Praline certainly IS cute! (Am I Master of Understatement, or what?)

What a doll! I like the name too! She's going to be a handful, I reckon! We'll be picking up a new wee puppy in a couple of weeks (needs to stay with mom until then)- another Rattie, but this one's a girl, and she won't be as tiny as Spartacus was - he was apparently an aberration...

Oh my!! I had to call the whole household around just now to behold your puppeh who is beyond adorable. You must be such a proud mamma.

I'd never heard of Nellie McKay! Thank you ever so!

m*g - I won't be-- I didn't know how easily a pup could contract Parvo, so she's got one more bunch of shots to get under her belt before she can be around a bunch of strange dogs. Thanks for the concern, though. :) I just want her to be happy, healthy and well-adjusted.

Parvo is running really rampant this year, with a number of vaccinated dogs getting a new/vaccine-resistant straing of it. (A friend from the dog board lost his fully vaccinated 6 yr old GSD to it this year.)

I can understand the need for happy, healthy, and well-adjusted. Do you have friends with dogs? One-on-one play dates are SUPER for socialization because you can control the environment. (At the dog park, you can't - and the things I've seen at the dog park make my hair stand on end!)