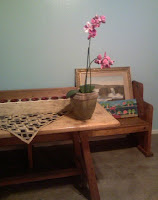 It's been forever since I've bitched about a resident, Bidet Boy* having been out of my life for yonks, but have I told you lately I have some of the loveliest, sweetest residents going? Yes, I have a few special-needs cases, but generally, they are a bunch of lovely people, and even the serial problem-children have a few good qualities to recommend them. Today I came home and there was an exquisite orchid by my front door. Someone heard about my dog, and left this grand thing for me to find. It really was tremendously kind and thoughtful. I was surprised and my heart was warmed. It felt a lot like I felt when all you nice people said such lovely and comforting things last week.
***************************
Tam had a post up Wednesday about a greasy little heart-attack-on-a-stick that is the deep-fried bananas foster which will be debuting at state fairs nationwide this year. That reminded me of a video which someone linked in the past (was it you, Xavier?) on CHICKEN FRIED BACON. 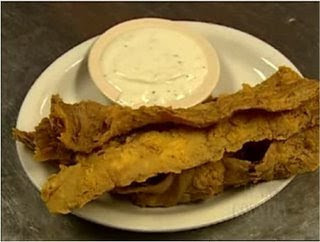 I'll let that sink in for a second.

Your eyes did not deceive you:

I don't know about you, but it sounds really, RILLY good to me. You can get it at a place called Sodolak's Original Country Inn in Snook, Texas, which I think is somewhere near College Station. That's Aggieland, appropriately enough. Now, if they could just serve it on a stick...

***************************
I'm still obsessed with Interpol, but I've been alternating 2 of their cds with the ever-exquisite In Rainbows by Radiohead. Below is All I Need from that release against a sumptuous setting of footage from the 1996 film Microcosmos. Who knew a hatching mosquito could look so elegant and lovely? Gorgeous footage and a lovely song.

If my crack team of scientists can mount that on a stick we'll definately beat Tam's fried bananas foster.

I have gots to try me some of that bacon.

aepilot_jim - "CRACK" being the operative word in your comment. Suspect chicken fried bacon will be the crack rock of meat products - I think we need to organize a blogger meet in Snook, personally...

ZOMG!!! CFB, with Cream GRAVY if my eyes do not deceive me. I think I need to go to SNOOK, right quick. You up for a road trip? I'll plug in Gertrude, and I'm good to go. Hell, I haven't even fully UNpacked from my last trip.

I can feel my gallbladder screaming just reading about that, P.

I'm pretty sure Xavier came across that clip last year or so. I passed the clip around to my list of usual email suspects at the time, and I think my brother actually tried his hand at making it. He said it was good, but then he eats fried Spam sandwiches with Miracle Whip and barbeque sauce. On Texas Toast.

Mmm BACON! I think Mom fed me one too many bananas when was a tyke in WestAsia - I avoid them still today.
But seeing that mosquito pop out of the goo makes me want a miniature Holland & Holland .450 Nitro rifle and kill the bastard.

I think Ted will be all over that chicken fried bacon. Yum.

The flower was sweet. I'm amazed at how I can feel like crap and then come across a pretty flower and I suddenly find myself smiling.

This year they added deep-fried Twinkies to the menu at the Calgary Stampede. Until just now, I thought that was the scariest thing I had ever heard of.

It's all part of my devious plot to take over the world. As soon as I figure out the elusive pizza on a stick. The world is mine! MINE! [insert mad scientist laugh here]

Thanks for keeping us in your thoughts, Phlegmmy.