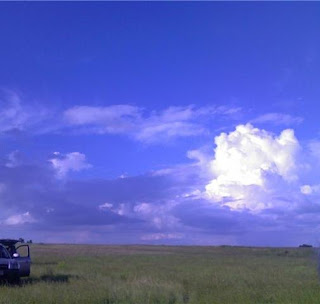 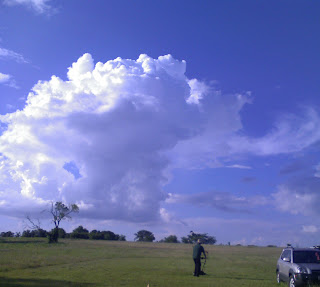 Saturday brought some spectacular clouds, as you can see. In the first photo, Matt G is mowing a huge swathe of grass out at the ranch where we were about to shoot. Matt borrowed Holly B's hat which was too small for him, so it sat atop his head. Holly had some nice grackle paper targets and everyone made mince of the little devils. I gave one a couple brutal foot injuries. JPG and LawDog displayed some mad shooty skills, and everyone had a lovely time. Even though I wasn't feeling well and didn't have the stamina for much shooting, it was a beautiful day to be out on the range...
Went into a store on Monday on an errand and ran into a lady who has worked with my mom in Dallas for about 15 or so years. What are the odds?
Chuy is fine and coming along nicely, recovering. Praline has had a huge attitude lately, and I don't know what's up with that. She's thinking Chuy is still a little chump pup and she's the bossy big sissy. We're working on that. Chuy, though shorter, is actually slightly larger, and he's not thrilled with the idea of playing second fiddle. They're learning they neither one are the big dog around the house. *sigh* Can't we all just get along?
Posted by phlegmfatale at 6:02 AM

What a beautiful, beautiful sky!
(not to mention fantastic pictures, too!)

Glad you all had such a good time, Phlegm. :)

Praline reminds me of a certain other dog I could mention (HARLEY!), who, though half the size of his brother, definitely thinks he's the boss around these here parts. Once in a while, Tucker gives him a smack-down, and then he's subdued for a few hours. They'll work it out, Phlegmmy...they are still puppehs, you know!

Even though I live far from a city, I'm finding difficult to find a place to shoot my rifle... It's just sitting in the corner gathering dust right now. Glad you had a good time!