Let me start by saying Chuy is probably going to be okay...

The prairie rattler wot bit him, otoh, had a rather abrupt encounter with a crescent wrench. [Thanks, Tole. I owe ya.] 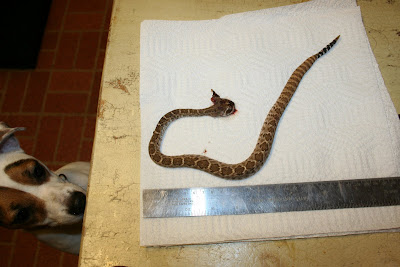 No, Praline didn't get to play with the carcass. I wanted him skint so I could freeze the meat to feed to Chuy later, but he was too small to properly hide. Oh well.


Chuy loves chewing on sticks. This stick bit back. Caught him on the back of his right front leg just above that big thumby pad. During the drive to the vet, he was in discomfort and his leg swelled, but not as much as I expected. A gallant local fellow went with and held Chuy as I drove. Hopefully the pup didn't get a very big dose. Thankfully, I had new tires on LouLou and I hauled ass into town, a local good Samaritan having called ahead to the emergency vet clinic. (Thank you so much, Elsewhere PhD.)

Got him to the semi-big-city within 40 minutes, and the vet presented me with three options. I could do an antibiotic thingie and take him home and wait it out, see what happened. Or I could spend a bit of a chunk on a treatment with a fair success rate. Then there was the (ghastly expensive) anti-venom and hospitalization route. The anti-venom shot alone is $500, payable up front with the promise of more evil to vent spleen on my bottom line.


I figure as long as I have stuff to hawk, I'm not going to spare a penny if it may mean saving my furboy. I'm anxious and worried, and I'm having the same symptoms as before I came down with pneumonia. Goody. Anyway, at least I got myself on antibiotics, too. This weekend, though, I need some rest.

First thing tomorrow, peasants have promised to arrive with torches and pitchforks, and there will be a rattlesnake reckoning about this place. 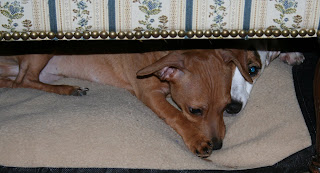 Will get a post up tomorrow as soon as I can to let you know the pup is okay. Saturday, Miss Praline is getting the rattlesnake vaccine, though, let me tell you.

Will post again as soon as I have news. I appreciate all of you keeping your paws crossed for my little Chuy.
Posted by phlegmfatale at 11:01 PM

Hope he pulls through quickly and smoothly. May the rattlesnake reckoning be fierce and thorough!

Rattlers in the house or too close to it I don't care for, but otherwise... I prefer my snakes to my mice and rats. Nature's balance.

Which direction, and how far from D did you wander? I've been an infrequent follower (sorry to say), so if you've said already I've missed it.

Casa de Macho is (give or take)45 miles southwest, and pretty much due south of Cowtown about 25.

Poor doggy! Hope he pulls through OK.
Sounds like time for some 20ga Snake Huntin'!

Lots of good thoughts for Chuy, hope he gets better real quick!

Jeez, as if you did not have enough going on right now - hope the wee laddie pulls through this real soon.

Have you got a castle near by - shame to let all those torches and pitchforks go to waste :)

Best wishes to the boy! Sorry to hear the news. Most dogs seem to get past this somehow. I bet he is cautious around the next one!

Probably just a defensive bite, some poison around but not injected like in a hunting strike.

I'm sure you need a couple of shots of snake venom yourself at this point, just to maintain sanity.

Why do I foresee a snake-huntin' party at Phlegmmy's with enough firepower to conquer Mexico?

Glad to hear he's on the mend, Phlegmmy!

I'm glad the pooch was unharmed...one of England's saving graces is the fact that nothing bites here.

Hope he's okay. This is a rotten year for snakes. My parent's collie just died from a snake bite and my other friend's dog got bit too. I think it's metaphorical for what's in the White House.

Phlegmmy dont worry too terrible much , pups are resilient. We had a cocker that over the course of her long life was bitten no less than 8 times . She just hated them " sticker snakes " and would kill every one she found with the foreseeable occasional injection.

Awww. So sorry Chuy messed with the wrong kind of stick! I'm glad to hear he's getting better...:)

Thud must be in a different England. When I was there, there was this nasty thing called an adder, and it was poisonous as hell, though not as bad as a rattler.
Elsewhere PhD

Chuy is in my thoughts. Sending good vibes his way.

On a happier note, you could pick up some tanning solution for reptile skin at Tandy leather and have yourself a nice pair of shoes and matching handbag when all is said and done. Damn snakes.

I wish the poor little fellow a swift and painless recovery.

Best wishes for Chuy. Got fingers and toes crossed for him!

Oh, poor baby Chuy. Give him a cuddle for me.

Living in Texas (Fort Worth) as I do, I know it's a matter of time before I meet my first Texas snake. That time, as far as I'm concerned, can be a loooooooong bloody time down the road. I hate snakes. HATE SNAKES.

When I do meet with such a critter, I hope I have a handy male with crescent wrench about. That, or a rocket-propelled grenade launcher. Fine red mist, and all that, but no snakey. Excellent.

(Too bad he isn't big enough to be skinned, as he might have made a decent hatband or some such. When the others are routed out, I suggest a fashion-related use for the larger ones.)

Keep a 25,000 volt stun gun handy. Zapped at the bite site, the electricity apparently neutralizes rattlesnake venom within minutes and the body simply excretes it out safely.

Hope puppy's okay. I assume the peasants will mow and trim brush, denying jake hipless a hiding place. Also as you implied the house was empty, with you around and noise and such, the snakes should wander off to other areas.
Seems like a tough little dog.

Mmmmmm. Is the dead reptile big enough to make a collar for Chuy? Ya know, to sort of serve as a warning to other snakes??

Glad the lil guy is going to be all right.

Horry clap! Glad to hear he's going to come through. Nevertheless, fingers crossed for the Chu Man. (And yes, any skill named after him would be called a Chu Man Fu. You're welcome.)

OrangeNeck: please cite your scholarly source that shows that a study has been conducted to prove efficacy in this, beyond just torturing the animal further.

So sorry about this.

Matt, DC current has been used by some. I'm not aware of any scholarly studies.