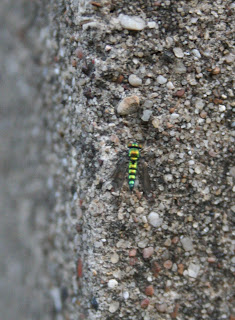 Saturday was a good day.

Chuy went for his last puppy shots. Got my oil changed. Took a guitar lesson. Bids on my ebay crap went up by $100 so that's $100 more to make up for what I spent on my geetar. Yays!
You know how you let the email pile up in your in box? Well, one of the problems of buying your camera a card with a jillion chiggerbites of memory is that stuff will stack up on you and it's a bear to sort through. Now the memory card in the camera is empty, and I've got new photos for the Diorama, which I have sorely neglected for yonks. Anyhoo, the main thing is that's thousands of photos I won't be carrying around in my camera next 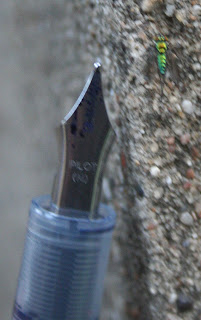 Here's a little green bottle type wasp I snapped in October. It was brilliantly colored, but impossibly tiny. You can see it next to a Varsity disposable fountain pen nib to get an idea of the scale. Click either picture to embiggenate. Nifty stuff. (The reason I was able to photograph this little guy is I came outside and found him awash in the doggies' water bowl, so I fished him out and he hung around on this concrete wall long enough for me to run get my camera while he dried.

One of these days I'll get a better handle on the intricacies of my camera. Was going to liken my camera skill set to the Wright Brothers suddenly manning the helm of a 747, but I think to do so would be to insult Mssrs. Orville and Wilbur. Oh well, one of these days...

Today will be a gorgeous day. I hope get a picture of a Texas graveyard with an 19th century alien grave. Srsly. Pictures tomorrow. :) Watch this space.

Wow! I've studied the 'Anagros Epos', a beneficial parasitic wasp in Viticulture...but I've never seen anything quite so small as your wasp...enchanting!

The wasp is beautifully colored!

I can't wait for the alien grave...spooky.