The pups always seem to know when I'm talking on the phone to Lin, and they put on a proper floorshow. They make a funny sound like a mini pair of cropdusters or something. She says they vacillate between sounding like a Tasmanian Devil (the cartoon variety) and buzzbombs. Buzzbomb is the right word.
They've figured out that momma is perhaps a smidge less observant of their antics when she's on the phone, so that's a perfect time to act up and get away with it. On the phone with Lin recently, I said "no, Chuy!" rather less emphatically than Lin seemed to think was warranted under the circumstances. She seems to think a cattle prod is in order. Says I'm puppy whipped.

I never said so here, because I wasn't sure if I'd make it, but in September, I bought (are you sitting down?) a sensible pair of shoes and vowed to buy no other new shoes until 2009. Guess what I'll be doing on January 1?

Just kidding.
Or not.
I'm a weak woman.
I've been good. I'm going to make it.
Have bought nary so much as a flip or a flop since forever ago.

Any the who, midday Monday I dashed over to Northpark to get a sensible, necessary product from Sephora [body butter is necessary and this stuff is the only one I really, rilly like] so I parked (illegally) and ran into the mall, the closest port of entry being Barney's New York. Rather posh, that one is. Scant few racks scattered about the store hold mere uncrowded handfuls of pricey frocks. I hied me in, bent on my task and using them as a very expensive hallway to Sephora across the mall.

OF COURSE, in that way that I have, I decided to fall in like with a pony hair pair of ridiculous shoes painted zebra stripe. Sale price? $650-ish, which was a huge savings from the original $1700. 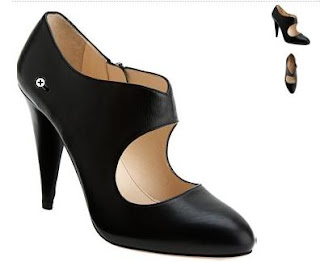 And then I saw them from across a crowded shoe rack: Prada Cut-Out Bootie. Here they are photographed in black, but the ones which made me slobber were a burnished metallic bronze color. Be still my heart. They were $259 from the original $640. Pocket change. A mere pittance.

WHY I WANT THEM: I am, after all, still me. And just lookie here! *palpitations*

WHY I WON'T BUY THEM: First of all, the only other pair of Prada I own have 1" kitten heels, and they are fine when I put them on, but after I stand in them a while, they are one of the most uncomfortable pair of shoes I ever have owned. And that's saying something. These may be more comfortable, but I'm leery for very good reasons. Also, well, I have several other pair which look vaguely akin to this, although none are that lovely bronze color. Finally, I can think of 259 reasons why I won't be buying them. I reserve the right to dream, though...

But if there's another super-duper markdown after January 1...

Yeah, it's a good thing I'm a starving college student, because otherwise I'd have to give in to my shoe addiction too. SIGH! Those Pradas are drop-dead gorgeous, but the bunyon in my left foot would have me limping in about 2 minutes, dang it. :( The older I get, the more "sensible" my shoes have become. Not that there aren't lots of lower heeled varieties of gorgeous foot-coverings to choose from... My greatest weakness are boots. Also, certain outfits simply require that perfect pair of shoes to go with them, know what I mean?!

And I'd be back in January to look for further price reductions. :D

Do your bit for the economy..buy!

soooo cute!! There are days (er um daily) when I wish I could afford shoes like those. Heck sometimes the pain is worth it.. and they do make nifty high heals gel inserts now days... ... *wistful sigh*

I will now blatantly steal a phrase I read on a friend's blog today: You're suffering from shellout falter, Phlegmmy.

Puppy whipped you may be, but you have just proven that you are not, in fact, shoe whipped. Stay strong!

Good for you for staying strong, Phlegmmy, just a few more weeks, you can do it...;)

All I can say is that it's a good thing that shoes don't pose adorably and blink big brown puppy eyes at you. Well, hopefully not.