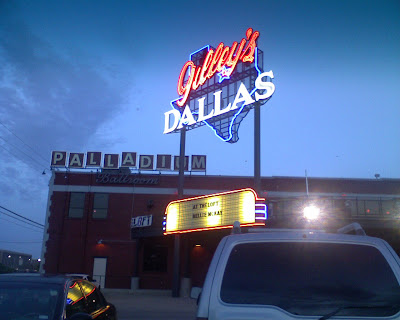 The night before I left for vacation in the Hill Country(august 8), I went to a couple concerts.

The first was Nellie McKay. No, don't get excited-- I didn't see her. The internet said the show started at 8:30, so I moseyed over there about 8pm. This time, parking in the parking lot was only $5, unlike the $20 parking fee I paid when I went to see Feist there in April. I bought my $14 ticket and I waited and waited. The show was in The Loft, which is a smaller venue attached to the Palladium on South Lamar. I was so excited because I'd only discovered her the previous month courtesy of Breda's blog, and I put her dog song on a post about my lovely puppy. It was going to be great to see her live.

Unfortunately, I had already promised to go to a biker bar to see a band from back-in-the-day with a girlfriend before I heard about Nellie's show, so I had some overlap issues there. I thought I'd go see 1.25 hours of Nellie and then head over to the biker bar. I asked one of the security guys if there was an opening act for Nellie, and he said there wasn't. I waited and waited. Finally, about 9:30 a couple guys came out on stage to do an opening act. (eyerolling here) Unfortunately, the friend I was meeting at the biker bar is a real stickler for punctuality, and she was sending her driver to pick me up at my apartment at 10PM. (This was S, my friend I went to the charity shoe 'do with Saturday night). At 9:45, I left and went home to meet the driver. I was disappointed not to see Nellie's act but it couldn't be helped. The crowd was very strange - like a tenured hippie university professor convention or something. I'll bet some of them had braided armpit hair with beads and pieces of bone woven in. That surprised me. I expected young and hip. (ya know: like me). Oh well.

The driver was a man from Istanbul, and we started talking about Turkish culture. He was gregarious and fun to talk with. He dropped me off at the bar, and I immediately recognized my error: to a man, everyone in the place was wearing black, white or gray, and there I was in a red v-neck t shirt and some sort of skirt. Uh, um. okay. So, before going to the concert stage at back, I walked into the bathroom where 4 women stood in their leathers and made entirely of ass-kickery. I turned into jelly. I wanted to flop on my back, pee myself and beg them not to hurt me. Okay. I'm kidding about that. I'm just saying that I think the four of them had testosterone levels equal to my own. Okay. Maybe a teeny bit higher. 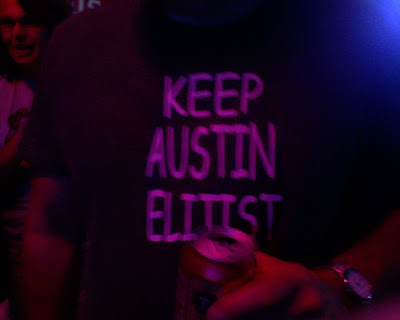 So, back into the venue, I found my friends. The singer of the Sutcliffes was in the crowd and wearing this t-shirt - Keep Austin Elitist. So true. I heard that some remnants of the Hickoids and Loco Gringos (legendary Psychobilly and TexMex punk bands from the 1980s) would be playing, but I never saw evidence of them, alas.

Finally, the act we all came to see took the stage: Tex Edwards and the Swinging Cornflake Killers. We all sang along to everyone's favorite song, Lee Harvey Was a Friend of Mine. Classic, that one. 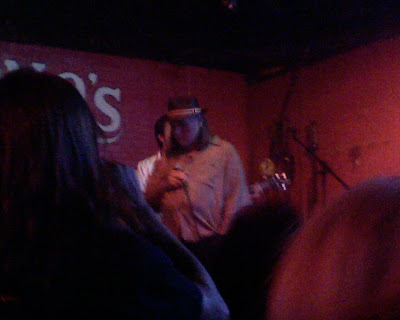 This snippet of the song is probably about 15 years old. Tex has a few more miles on him by now, but he seems to have not-mellowed nicely. Loved the hat.


So, the driver was taking us all home, but the others all lived close together in Lakewood, so they trumped me, and the driver took me home last. Before I got out of the cab, he said so when are you coming with me to Turkey? I just grinned and thanked him for the ride.
Posted by phlegmfatale at 12:01 AM

Well hell, you missed two good opportunities to latch onto a good man!