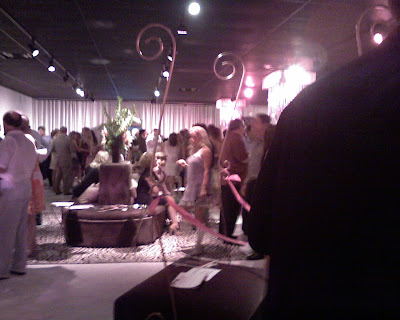 It's after midnight and I'm kind of baffled by the surprise Saturday brought.

I'd gone out Friday night, and despite my preference to remain unconscious until late in the morning, my friend S called me at 8:30 and asked me to attend a charity event with her Saturday even 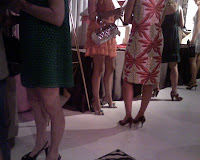 ing. I hemmed and hawed and said I'd let her know later after I was properly awake (and hopefully feeling more human).

Feeling better in the afternoon after a teeny spot of retail therapy and a proper Chinese meal, I capitulated. After I said yes, I'd go, then S chose to tell me that she'd paid $600 for the two tickets to this event. Oh, crap. Sounds fancy. Sounds a bit intimidating. Crappity crap crap. I found a simple black dress to wear and I wore my tooled-leather gray 'Vogs with the ribbon tie closures. Okay, it was very conservative, but it was cute. I was gonna bite the bullet and just go for mebbe 45 minutes. Turns out this was indeed a super-swank affair, and I felt I should have put on the dog a bit more and worn something more evening-oriented, but, oh well. I felt good in my vogs. I put on my new D&G specs and rocked the hep librarian look. I thought Breda thoughts. I thought of England as I h 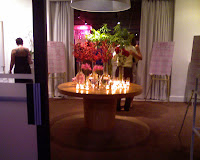 anded my keys to the Valet driver. I pictured LouLou the Baby Shoe's little Hyundai knees a'knockin' in the parking lot filled with huffing and puffing Mercedes, Lexus and Inifitis.

They had what looked like an amazing buffet (I'd already eaten) and no one was going near it. Ironically, half the women there looked one meal from malnutrition. I pictured them tied up like fois-gras geese with funnels down their gullets, being force-fed. Poor dears.

Neiman-Marcus and a whole lot of local retailers donated shoes for an auction to benefit charity. Oh, and the bids ranged from about $120-ish to several hundred for the starting prices. Wow. The only pair of shoes that sent me into orbit was a silver pair of platform mary-janes, but they were 2 sizes too small for me. *whew* Dodged a bullet there, actually- being removed from temptation, and all.

Anyhoo. There were fancy silver tiered plates of shoe-shaped iced sugar cookies sitting neglected on various tables dotted about the place, so I took one and ate it. Wouldn't you know, the photographer for the local fashion/society paper snapped a photo of someone right in front of me as I took what was probably not a dainty bite of the cookie. Lawks!

I figure my 2 drinks and cookie were $100 each. Wow. The neatest thing in the place was a vault they had set up with a huge refrigerator type chiller, and they had a table made of ice for serving cosmopolitans. There was a big shoe-shaped ice sculpture with a channel carved through the middle for pouring the drinks through to cool, with the liquid pouring out the toe of the shoe. This room was actually more quiet and less crowded, so I sat there in comfort and enjoyed the cold. Here's a pic. 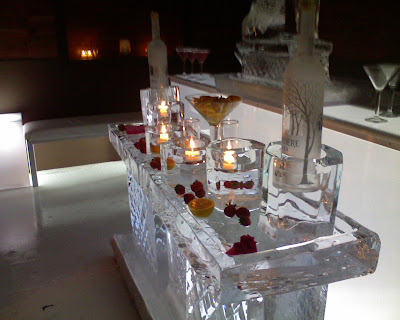 It's funny that I've gone and done things these past two nights a mere couple days after I was thinking I needed to do more spontaneous things. Careful what you wish for, I suppose.

Well, hopefully this time next year, I'll be living a more quiet life elsewhere, but for now and while I'm still in the city, I'm going to make the most of it.
Posted by phlegmfatale at 12:17 AM

Sometimes it can be beneficial to step outside of one's comfort zone...but I HATE it. Sounds like you rocked the whole situation. Good for you!

LOL - what, dare I ask, were those "Breda thoughts"?

It sounds like a fun evening, though. It's good to have little adventures like that. (I mean, what the hell, right? Life is short.)

Well, hopefully this time next year, I'll be living a more quiet life elsewhere, but for now and while I'm still in the city, I'm going to make the most of it.

And well ya should, Phlegmmy. I wouldn't trade my rural life and go back to The City, but I DO occasionally look back at city life a lil bit wistfully. Especially when it comes to restaurants and bars... not so much the traffic and too-plentiful idjits and other annoyances you find in the city, any city.

Wow! Despite having to be strong-armed into attending, it sounds like this event was made with you in mind. Shoe events for Phlegmmy!

I think it always works that way for me -- as soon as I say that we need to get out more, we wind up overbooking ourselves and then I want to hibernate again. Silver mary janes sound really cute (esp. if they'd been flats for me).