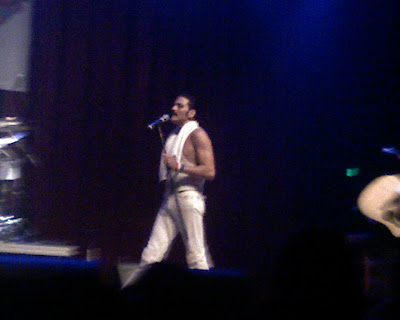 Maybe it's because I was on vacation the previous week, but this week was really rough. I suppose it's a good thing for other staff that people seem to save the puke&doodoo eruptions for when I am on property but it sure does make for a bit of stress. Anyhoo, I was looking forward to vegetating this weekend.

Friday night, though, Tracy called me and told me she was going to see a band at House of Blues and had left a ticket for me at will call. After a teeny bit of arm-twisting, I agreed to throw myself together enough to drag out and meet her there.

I took the doggie for a quick walk and showed up late. People stop me everywhere I go to make a fuss over Praline, so that took longer than I expected. Puppeh thinks everyone came to see her.

The band was a Queen tribute band, Almost Queen, and it was a blast. I wore a simple black top and black skirt and my 6" mini mouse platform Mary Janes. It was a good look and I was proud of myself for putting it all together without smoke coming out of my ears. My hair was curly and eNORmous. Not poodley-Brian May hair or anything, just big and frizzy. I decided to pretend that was all intentional.

Oh, they have one of those bathroom attendants in the concert hall bathroom. I suppose it's good because that lady will keep the place relatively tidy, but I find it annoying to have the paper towel dispensers disabled so that after washing their hands, patrons are obliged to take the paper towel the attendant hands them. A tip basket sits yawning expectantly on the counter. Yeah, I've always hated that.

Anyway, the band was a lot of fun and really had the whole Queen schtick down pat. The crowd was one of the strangest collections of humanity(young/old, hip/dorky) I've seen at a show, but we all howled along like Wayne and Garth, and it was a hoot. I also must add there was a display of some brilliant musicianship. The vocalist has a fantastic voice, and is very evocative of the physicality of Freddie Mercury. The other band members were great on vocals as well. Mastery of all instruments was in evidence, and I have to say I just LURVED the drummer. All around, the musicianship was excellent, serious business. It's always great to see good music brilliantly performed, and Almost Queen definitely fills that bill. If they come back to Dallas, I'll definitely be hitting that show. I'll also give you fair warning so you can come, too.

Tracy and friends were excited about some Weezer-alike band playing over at Double Wide, and did I wanna come, but I was tired *whine*. More arm-twisting. Yeah, okay. Tracy said if she'd had the long seat on her scooter, I would have to ride with her. I told her I wouldn't have anyway, that I didn't want to mess up my special hair mojo. I rode with Margo, the schoolteacher with the Hiawatha 'do.

Over at Double Wide, we went where the band was playing. Everyone was singing along there, too, but I don't know Weezer from Eve, and it was hot and smoky, so I went back out to the enclosed patio area. I sat on an old bench car seat next to some spare white guy who was engrossed in conversation with a couple other people around a table. I only sat there because it seemed like the most comfortable seat, and the guy, Clint, looked like a normal human being. We talked a bit, and one of his friends had a rainbow clown afro wig on and I said "love the beard!" He had no facial hair. I don't know why I said that. All those guys were in a band that just finished touring with someone named Lincoln Park, but I don't listen to the radio and I don't know who that is, either. Yeah, hanging out with a band. Crap. I just realized I never asked the name of their band. Oh well. haw haw

Anyhoo. One of the band girlfriends and I went back into the main bar and sat there in the air conditioning, talking and laughing. My friends found me and I said I'd take a cab home, which I did. I was really too tired for all of that, but I'm glad I went. In truth, I'm too old for hanging out with people half my age, but every once in a while, it's nice to get out and appreciate that you're NOT 21 and going out every night. It's nice to be old and smart enough to take a cab, too.
Good times.
Posted by phlegmfatale at 9:03 AM

In truth, I'm too old for hanging out with people half my age, but every once in a while, it's nice to get out and appreciate that you're NOT 21 and going out every night.

I saw Queen in concert when I was in high school. I wasn't old enough to drive, but my folks let me go with a friends older sister. (I had pretty cool parents).

Still love their music to this day. Wish I could have seen that concert you went to.

Howdy there fellow Texan,
Just, and I mean just, saw this on the net and thought a precautionary note may be in order.

Disregard if it ain't the same ball yer pooch has in the photos on another post.
I like yer Dallas photos, updates my memories from growin' up there.

buck - Understandable. I can handle it in small doses. My job is as benevolent dictator to a lot of 20 somethings, so I take a bemused interest in them, so long as all that business stays at arm's length...

brigid - I wish you could have been there too - it was a great night. I'm so envious that you got to see them. That was very cool of your folks.

cathode ray - I do appreciate it, and mauser*girl mentioned this in my comments as well. The ball I have is from another manufacturer and has a hole in the opposite side to prevent a vacuum from forming in the ball. Even so, I'll only let her play with that one if I'm home and supervising her. Can't be too careful with our little precious ones. I appreciate your thoughtfulness in passing that info along, and I'll be certain to let others know, as well!

Glad you like my Dallas photos, and I'm sorry I've been such a slacker with the Diorama. I need to start posting there again. :)