I found the coolest lodgings on the Guadalupe river today. It's called Hideout on the Horseshoe and it's the neatest place. It's on a bluff overlooking the river, and you can watch holidaymakers float by on their tractor inner tubes. I want to stay here sometime soon. These lodge-style cabins are exactly as I would have designed them with lots of xeriscape plants and native rock and wonderfully colloquial touches. At least one of the cabins has my dream bathtub, too. *squeal*

Tubing is a big Texas tradition, but I've never done it before. If I feel up to it, I'll go tubing with the girls on Thursday when they go. So far this week, though, I'm feeling a little puny for gamboling in 100+ degree heat, even in the water. we'll see.


OKAY - I wrote that bit above on Tuesday, but had problems getting it posted. For half the week, I had problems with the internet on my celica foams, but I got home Satiddy night and we're cool for school now. New Braunfels, the Texas Hill Country, Gruene and Canyon City were all absolutely grand. Despite the brutal heat the trip was beautiful and relaxing. 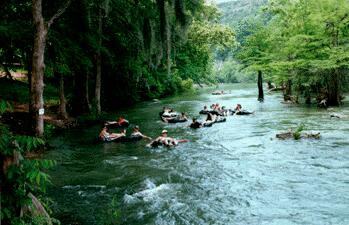 ursday. Truth be known, I felt embarrassed about being such a wet blanket all week, so I sucked it up, and I'm so glad I did. We floated the Horseshoe 2 times all together, and one of the girls and I went back for a third go-round. Good thing we did, too, as Flo rescued a small, crying child who was stranded on some intimidating rocks as her family had been pulled downstream by the rapids. The trip around the horseshoe on the river is about 1.5 hours. Water was released from the dam that morning, so the river was a little higher and the rapids a little more exciting for the second and third go-rounds. I would post a video from youtube, but all the Guadalupe toobing vids I found there was plumb et up with ignunce and didn't do the experience justice. You'll have to just take my word for it. Let's just say that between now and when the weather turns cold (maybe November or December), I plan to go down to tube the river every chance I get. Great stuff.

I need to give a patented phlegmmy 5-hankie salute™ to Neutrogena Sunblock Ultra Sheer Body Mist SPF 70. Other than shooting and mostly covered up to the wris 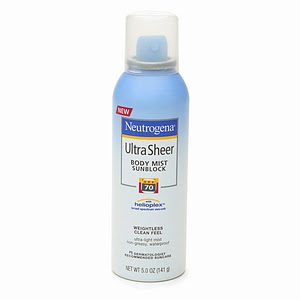 ts even for that, I haven't been in the sun all summer. Thursday I sprayded myself thoroughly with this product and I have nary a crispy bit on my no-longer-fair person. I followed instructions and sprayed it all over about 30 minutes before going into the sun, and I kept it in the ice chest (OOOSH!) and re-applied it every couple of hours. Truth be known, though I stay pretty fair, my skin is olive and I have rarely burned, and never to a crisp or blisters or peeling in my lifetime. I just prefer being pale, but now I'm tan after only one day, and that with no redness or discomfort. Tra la. If you apply this stuff, be sure to do so in a well-ventilated area, as it is super-fumey. Also, don't spray it on your face- spray your hands and then wipe them on your face. The most easily-applied sunblock I've ever used, I got thorough, even coverage on my back without having to axe for help.

Miss Praline had a grand time, and Flo brought her Sheltie and the dogs scrapped and played and larked the whole week. Now, home alone with me for about the past hour, she's been barking and I think she's a bit underwhelmed by the silence of home. I think I need to get her some dog and human noise videos, or something. She'll never be satisfied with just her old mommy again. Meh. She seems to have doubled in size in just the past week, too. 3 weeks ago, she weighed 2.3 pounds at the vet, and now she is over 5 pounds, and I think she looks too thin, actually. Growing girl. She's getting some really cute spots on her belly, too. She now can latch onto a chew toy and be picked up by her teeth.

Oh, and Praline now sits on command. Smart girl, that!

Anyway, we stopped at a superb barbecue place in Belton (Schoepf's) on the way home on Saturday afternoon. BBQ was the perfect ending to a week of wonderful meals at restaurants and back at the condo. We found a fabulous Cajun place on 306 called Plooky's and all proceeded to fall in love with the owner of that fine establishment, Jodi, who was a textbook version of a character. Loved her. Vowed to go back. The night before we left, we met SpeakerTweaker and his gorgeous family there for a cajun boiling pot-style feed. ST ordered 2 lbs of crawdads with the heat turned up to 11, and he was a happy man. His wee daughter made an impressive dent in a smoked turkey leg and Jodi gave her a long seashell, called it a "shell phone." Funny, clever and incredibly cute. We had a lovely time.

It was a grand week, and good to get away from Dallas and spend time with people who were ever ready to have a good laugh. Getting back into town and to my apartment in the shadow of skyscrapers, I thought how strange to be arriving from the country to the thick of the city and so-called civilization to say "I'm home." Well, for the moment I am, but that's not forever... The noise here is terrible. It's so much nicer to be someplace where you just hear the river and the bugs at night. I confess I was a bit nervous about snakes and the skunk family lurking around the resort, but me and the pup emerged unscathed, and so a miss is as good as a mile. What snakes? What skunks?

Thanks for the invite, Hols, and it was great getting to know Flo better, and very nice to make the acquaintance of Az. I hope to see you all again soon. :)
Posted by phlegmfatale at 12:01 AM

Sounds like such a good time, and I'm glad Hol tried the mac and cheese.

Tubing was big when I was young, haven't done it in years.

Sounds like you had a grand time in the hill country. Now you can say "maybe I haven't been to heaven, but I've been as close as you can get on earth."

30+ years ago when I was scoobie divin', a bunch of us made the trip down the Guadalupe in wet suits with snorkle and mask. Now that be fun.

Well, we had an absolute blast at Plooky's with the four of y'all. I'm looking forward to the next meeting!

Make sure and drop us a line when next you hit the Guadalupe.

It was a GRAND time, weren't it? AS soon as I recover, I'll find my second post from last week and get it up.
Thanks for teachin' us the new songs to sing around the metaphorical campfire!

The Hill Country is Numero Uno on my "places to live" list, should I ever decide to leave P-Ville. An ol' USAF buddy of mine introduced me to the area not quite 30 years ago... and I immediately fell in love.

that is MY dream bathtub!

brigid - you really should, and you should take up tubing again. It's a delight. Just be sure to do it on a weekday so the river is not thick with humanity.

myron - I saw a couple snorkelers out - I figured they were harvesting the booty from the river gods!

kelly - you and I should go there together once your paw has healed!

speakertweaker - thanks for meeting us! Will look forward to seeing y'all again sometime soon!

holly - I know you ladies will never be the same!

breda - ...but then, I already knew you had good taste, honey!

I have fond memories of Canyon Lake growing up. Love the tubing! Beautiful country.

New Braunfels has the best Germanfest every year. Great food and beer, of course.

Glad you girls had fun and aren't in jail :-)

I am glad that you and Praline had such a wonderful time. I haven't tubed in ages...

I've never been tubing, but it sounds like a ton of fun...so it goes on my list of things to do!

I love, love, love that neutrogena sunblock. Silver has been going to band camp since last Monday, and as ghostly pale as she is, she hasn't had a spot of sunburn! I do spray it on my face, I just keep my eyes closed for about ten seconds to make sure the stuff's dry, otherwise OW!

Oh, and I hear you about city living, it's gotten very very old for me...

I had a blast riding to and from Hill Country with you and Miss Praline--I can't believe how much it looks like she's grown in the two weeks since!

It was a much needed and enjoyed getaway. Nothing like being able to laugh yourself silly with the girls all day! Plus the honor of meeting Tweaker and his family, while gorging on great food!

It's much quieter on the homefront here, too. Miss Allie would also probably benefit from a companion, but I think we're all boarded up here!