Last weekend I issued violations to a host of vehicles on my property and then called to have them towed. I hate doing this, because on such occasions, there will invariably be a resident who forgot to give their guest a pass for their dashboard, and the vehicles of legit guests will be swept with the tide to the tow lot.

There were so many interlopers this night that I absolutely dreaded learning after-the-fact how many were actual guests of residents, but I sucked it up and issued the violations even-handedly. I met with the first tow truck driver, and went home, leaving them to their work.

Sunday morning, I was baffled to learn from the tow company that only a handful of cars had been towed, the rest having cleared out of the lot. Greater than my surprise, though, was my relief.

Monday, a resident called to tell me of a neighbor who had gleefully pranced out on the lot and removed the parking violation cards after the first 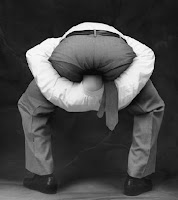 wave of towtrucks came and went. The caller also said when the tow trucks returned, Prancer leaned out of his window and said (verbatim) "Ha! Ha! You don't know which cars to tow, now! Ha! Ha!" The tow drivers didn't hear him, so he repeated this several more times. You have to love this kindergarten-ese from a man in his 30s. Meanwhile, his neighbors were steamed that he prevented parking violators from being held accountable--my presence there had been the result of a deluge of desperate calls from residents who had no place on property to park.

In fact, I benefited from symbolism over substance, having demonstrated my commitment to community policy, and he prevented guests' vehicles from being towed. Rather than annoy me, Prancer did me a huge favor: I enjoy the high regard of residents, and don't have to catch the flak from disgruntled ones. His little caper to cause me difficulty achieved the opposite, and made himself look asinine to his neighbors in the process. How sweet is that?

What a little turd that guy is.

Yeah I hated some jackass taking my assigned spot when I lived in apartments. Around here they use great big near impossible to remove dayglo green stickers for parking violators.

What a douchebag. But unintentionally funny. Hey, you earned your brownie points, Phlegm. There's nothing he can do to take them away now!

hammer - mighty turdly, indeed. Need to get me some of those day-glo stickers.

A - *HEE HEE* Well, which pair COULD it be? Hmm. Turquoise? Orange? Seersucker? Reminds me of Ted Knight in Caddyshack

christina - Wow, you figured that out about him from just this one teeny little post? His neighbors agree with you and have often told me so. I'd be embarrassed to behave that way in public OR in private. Childish.

Ya done good, Phlegmmy! And good was done by ya, too!

I love it when the stars align like that. Sometimes the Karma Police do get things right, even when the perpetrator talks in kindergarten speak rather than in maths. He still buzzes like a fridge.

kbarrett - so funny you send that link - I have the Peachtree catalog open to that very page on my desk right now. Must call immediately

super-adhesive stickers could make a world of difference with that.

Good deal, Phlegmmy! I would have dreaded that duty myself. Just to drive him nuts, next time I would go out and hit every single car with either harmless 'thought for the day' messages or the real thing. Then stand on the roof with a hose and spritz him good as he makes the rounds.