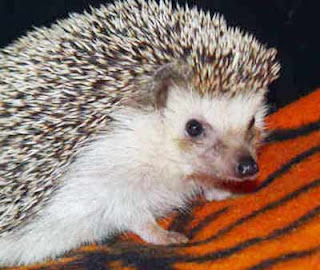 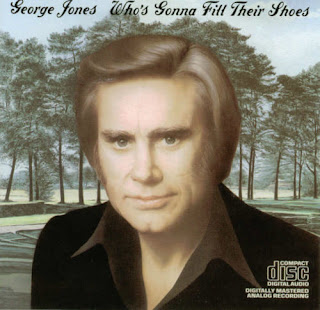 
I mean this in only the most complimentary sense. I really like George Jones. I like hedgehogs, too. But something about their physiognomy is very similar: there is a directional pull to a central point, a force which sucks every fiber of their being to a terminus which-- like gravity or the perfect souffle-- suggests the divine order of everything-in-its-place and As It Should Be™. Yes, that point is the dainty little plug of a snout. KEWT! George's features sorta all bunch up in the middle, as if he were born with a flat face and it all pulled and tugged and squoze up as the little nose bump was formed from the wet clay. Yeah, camera angle plays a role, and his face doesn't look so hedgehoggy here, but I thought the 'do was African Pygmy Hedgehog all-the-way, so this is the entry that won out. Enjoy.
Posted by phlegmfatale at 2:36 AM

I LOVE hedgehogs! Did you know they hiss like cats when they're pissed off? I know this from personal experience...
George Jones just has a huge, huge forehead. I wonder if he hisses...

I did not know that you could get Private Eye in Dallas (satirical magazine where they run similar letters from readers).

This sounds like a ploy to get Nanny Ogg in here singing her notorious Hedgehog song :)

Blasphemous as it may be, am I the only one who thinks that pic could have been Jim Carrey? I mean, look at it! This guy could have been at least ONE of the characters from A Series of Unfortunate Events!