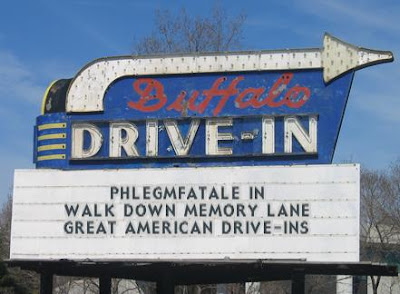 For Thud (a Pratchett reference? You must be a superior human being) I found this site which lists active Drive-In theaters in the USA. There I found this page on which you may click for a particular state and see the currently active DI's there. I hope you get a chance to visit one - though it's a less common thing these days, the Drive-In theater was a big part of the great American love-affair with the automobile, and was a golden moment, in its way. With names like Starlite, Astro and Apollo, even their names were somewhat romantic, in a lot of cases.
I noticed that this theater in the Texas panhandle (thanks for the tip, LawDog) is not listed on their site, though, so it may not include all drive-ins which might be in your area. I'd say an extensive search might yield more theaters than listed here, and would definitely be worht the effort.


When we first moved to Texas, our family went to see Superman at the Astro drive-in in Dallas. This was a massive Drive-In with 3 huge screens. In the back seat, I made free to look out at the other screens at 4- and 8- o'clock. I don't remember 8 o'clock, but 4 o'clock was featuring Kentucky Fried Movie. Of course, I couldn't hear what was going on, but it looked completely insane, so I was naturally much more interested in that than the Christopher Reeve action. The image from KFM which seared itself on my brain permanently was a shot of what appeared to be poop landing on the head of a babydoll. Do I mis-remember? I've never watched that movie, which is a funny thing, considering what arcane and bizarre movies I've consciously sought out in my adult life. Anyway, at one point, I laughed out loud and Mom realized I wasn't watching the same film as she, and she scolded me soundly. I kept watching to see what was going on in the other films. I've always been a multi-tasker.

Tuesday nights at the Astro were $5 for a carload, and scores of cars would arrive and disgorge themselves of uncomfortable amounts of humanity.

In the summer, one night a week at Victory Park next to American Airlines, they show a classic or cult film on their big screen. You can bring lawn chairs and a picnic. I haven't been, but I'm told it's pretty neat.

Also, sometimes in the Observer, I've seen an ad for a rogue drive-in thingie where they project a film onto a building or solid surface and people just show up to watch it. They don't advertise where for obvious reasons, but everyone gets an email sort of at the last minute telling them where to convene. I'll try and get more information on that - it always sounded fun to me.
Posted by phlegmfatale at 8:22 AM

I wasn't allowed to go to the drive in as a teenager on a date.

The fact that my boyfriend's Mom was a single parent and worked afternoons and evenings as a nurse didn't occur to them. We had a whole house to ourselves. . but the drive in. . my god, what we might get up to. :-)

I wonder what my parents got up to at one when they were dating in high school.

I do remember vividly seeing Bambi at the drive in with my Dad, when he took us when Mom was going through checmo.

Spent the summer of fittyawtthree at the Co-Ed DI in Denton with my lil sweetie. I was 15, she 14. There was another DI there but I don't remember the name.

Then we moved to Houston and I would go to the Market Street Drive-in with my buds. And meet girls. On Monday, Buck Night. Yep, car full for a dollar.

And that's where I met the future Mrs Myron, by the way. But she wouldn't leave the snack bar with me. I had to go to her home and pick her up all proper like.

Yes, I remember seeing Bambi in San Antonio at the drive-in. It also had several screens and I'd watch something else while listening to our movie.Boy, those were the fun days.Years later in Ca. a friend and I would climb onto her roof and watch the drive-in theater. Bliss.

lin - Yeah, good thing you didn't go to the drive-in, because no telling what mischief you would have gotten up to. *hee* Your parents had some reason to be paranoid about them!

myron - aw, that's cute. Mrs. Myron was right to make you go through the formality, and it's a much cuter story than "I picked my wife up at a snack bar."

lainy - Cool - that's two-fer Bambi Drive-In sightings in one comment section - cool! It'd be cool to live close to the drive-in, so long as you could hear the audio from the snack bar speakers.

Been to the Astro, Gemini, and numerous others on many of occasions and I miss them all dearly.

I've been looking at list on the sites you linked to...lots of possibilities..can't wait for july when I arrive back in California..thanks.

Always love the stuff that John Pronk does.