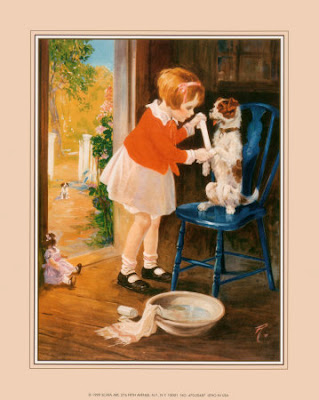 I haven't talked a lot about the doglet lately, but she's not been feeling very well. She turned 16 on Halloween, and while that's not an un-heard age of for a Jack Russell Terrier, she's definitely an old lady now.

The problem is that she's been puking her food up every time she eats. Sometimes it's many hours later when this happens. Anyway, I took her to the vet and had bloodwork done, but haven't gotten an answer from them about what's going on. I spent about $200 on this visit, and I've called twice and asked the Dr. to call me back. Once one of her flunkies called back 2 days later and left a voice mail asking me what the problem was.

I adore my Vet and I think she's fantastic (if expensive) but the staff at her clinic lately are beneath sucking. For example, the day I took her in 2 weeks ago, I splained why I set the appointment, and when I arrived with her, I told them the catalog of complaints. The person who checked us in asked again "now what was wrong with her ears?" and I said I hadn't mentioned her ears, and went through the laundry list again. I was dropping her off and would pick her up at the end of the day. That afternoon, the vet called and left me a message and said doglet looked good and seemed okay, and she couldn't find anything wrong with her ears. So the dimwit at the check-in heard me catalog her ailments TWICE and proceeded to ignore what I told her and wrote something about her ears on the card. I tried not to act impatient when I explained to the vet what had been happening, and she decided to do a blood panel and make sure everything was working properly.

I spoke to a receptionist on the phone Wednesday morning who said she'd have the Dr call me before the day is over. I never heard from the doctor. Meanwhile, it's hard for me to get a full night of sleep when my little dog pukes on me at 4ayem. I had to exile her from the bedroom, and it distresses me not to let her sleep on the bed when I suspect she's feeling poorly. I don't want to make her sad in addition to sick.

Holly's sent me her vet's contact info, and I'm going by my vet's office Thursday morning to pick up all her records and the bloodwork from the 15th and taking her elsewhere from now on.

Do you think I'm over-reacting? I suspect that what's wrong with her is not enormous, but you never know. I hate to think of how frantic I would be in this case if I thought my dog were at death's door. Tell me if I'm being a drama-queen. I think waiting nearly 2 weeks for a clear answer is asking a bit much of a concerned pet devotee.
Posted by phlegmfatale at 11:35 PM

No, you're not over-reacting. This kind of behavior would be unacceptable for mere appliance repair shop, let alone for someone you've entrusted with your pet!

We ditched 2 vets before settling at our current one. And we always made sure to tell the old ones why.

I don't think you're overreacting at all. Regardless of how wonderful the vet may be, she's only as good as her staff. Two weeks (or more!) is an absolutely unacceptable length of time to wait for results.
My $0.02.
Hope doglet feels better soon.

I think you should seek proper care for her. She's a beloved pet and part of the family. You make sure she's ok and let us know how things turn out with her.

If you couldn't keep a meal down, would you wait 2 weeks for results from you doctor?

'Nuff said. Find a vet that is actually concerned with addressing the health issues of his/her patients in a timely manner.

Totally not an over-reaction. If it were me, I would go into the office to collect the paperwork and give the staff an earful. Then, because they'll undoubtedly hear something completely different than what you said, I'd give a letter directly to the vet explaining the problem. She may not know her staff sucks so much, because people could have up and left without telling her anything.

I hope the puppeh starts feeling better soon. :-( It could be a thyroid problem.

Find a new vet. Doglet needs attention now. Not being able to keep food down can have several causes.

Blood work results should take no more than a couple of days. My vet always calls to give me the results. One of his staff always calls a couple of days after a visit, even when it's for a routine annual and there are no problems. I'd give you the info but don't think you want to drive all the way down here.

The vet you're leaving needs to know why. A nice polite letter explaining the ear deal.

And yes, you're being a drama queen but in this case it's justified.

You are not overreacting. You love your dog like a family member, there's nothing wrong with that.

And besides, from a purely economic viewpoint, you are not getting what you're paying for. Be sure to tell the vet why you're taking your business elsewhere.

Ditto what everyone said, especially the part about hoping your puppy feels better.

I, too have experienced the middle-of-the-night barfage. My dog used to sleep with her head on my pillow. Ucky.

No, you are not over-reacting at all!
Definitely get a new vet and you might want to leave a letter to her describing what happened or just tell her to link to your blog (even better as then she will hear others responses). I am listing some web sites that you can check out and put in the description and come up with some answers. You also might want to check for the "Senior Dog List" as I have been a member for years but started with my senior JRT and the people there are wonderful!

Also all the big vet schools have sites you can check out: Cornell, Tufts, etc.

Hope Doglet does better! Sixteen is a very good age as generally they get into too much trouble before they can get there!

Gail & Harold (Corgi)and all our angels (2 were JRT)

Absolutely not. Go elsewhere and in a hurry.

Rebel ended up in the vets three times last week, two days, tests, and one day surgery. Cost us $600 but the vets are good and so is the dog! Thankfully we can afford it.

Yeah, 2 weeks is unacceptable from a TV repair shop and absolutely unbelieveable from a vet or human clinician. I'll be glad to give you the name of my vet(s)- one in Frisco, the other in Richardson- the Frisco vet is incredible, the Richardson doc is one I'd let treat ME. Drop me a line on my gmail and I'll be glad to share, or let me know in a followup and I'll email it to you.

Same reason we switched pediatricians. They didn't quite understand that I was unhappy that they let my child get pneumonia. Aherm.

We go to Hillside and think they are lovely, lovely people. Moll goes psycho with joy every time we take her, so they must treat her well. And they were really helpful when she ate the razor blade and nice that they didn't decide they had to do surgery and charge a billion dollars.

Totally agree with all the others: no over-reaction on your part. That said, your vet probably needs to understand why you're taking your custom elsewhere... it's the staff. It sound like a few clerks and/or other admin types need a hard lesson. Losing long-standing clients is the death of any professional.

You are a much more patient person than I am.

While I absolutely know the value of having a great vet, a great vet does not make up for getting completely crappy treatment from the rest of their staff - from receptionist to vet techs. If they are rude to me, don't do what they tell me to do, don't listen to what I'm telling them, or handle my dog in a manner I do not approve of, I would always speak up.

Vets are a BUSINESS and as such, they need to have good customer service and need to be able to interact with the public in a manner that is acceptable and shows that they want and value your business - particularly if you are doing nothing other than being a concerned owner.

Take your records and go to another vet. Seriously. Your dog's health is not worth messing around with with this clinic.

Personally, I don't think the prices at your vet are expensive if it was $200 for a visit and blood panel with a day's observation. There are vets out there that are MUCH more expensive.

But what did you say was wrong with her ears?

Sorry, I couldn't resist. OF COURSE you would be worried, who wouldn't be? I hope you can get good care for your girl and that she is soon sleeping happily with you again.

totally unacceptable!!THEY have the "ear problem". I would let your ex-vet know how incompetent her staff is for sure...and yes 2 weeks is beyond too long. Hope she feels better and you get some answers soon!!!!!!

Oh hell no. If your dog is puking like that, you shouldn't have to wait more than a couple of days to find out what's wrong. I would do the same thing.