Well, THAT was fun!

I just wanted the chance to slap around a bony, addle-witted broad. Actually, I always wanted to live in England, if only for a little while. It's so great when you can go into a structure and see where it was built in sections from the Norman period forward. You have so much more a sense of being part of a continuum when everything around you wasn't just built in your own lifetime.

I always thought I'd get a chance to live in England, but I suppose that ship has left the station.

As for living in Texas, I hate the heat and there's waaaay too much sun for my taste, but I really like the people here.

I was waxing so gushmatic after the Imogen Heap episode that I didn't talk about how Austin has changed in the several years since I've been there.

To bring you up to speed - didja see that movie "Slacker" about 14 or 15 years ago? Yeah, that one. Well, that very much conveyed the typical neo-hippie hang-arounder one would always see in Austin at that time. They're still there, somewhere, no doubt. However, that place has slicked-up proper, and frankly is looking more Dallasesque all the time, in my opinion, to their detriment. Texas already has a Dallas, you poser copycats!

Funny thing was there was a bumper-sticker trend in Austin for quite some time that said "Keep Austin Weird." In response, a group of Dallas' own eccentrics formed a group called "Keep Dallas Plastic" and they are a little kooky. I've never spent any time reading their site or anything, but I appreciate the off-the-chart nutty factor. Actually, what's funny is that they seem sorta activist and whole-grain-ish and probably more than a few of their women sport armpit hair you could braid and bead. Probably no deodorant, no hair products. Probably not much plastic. 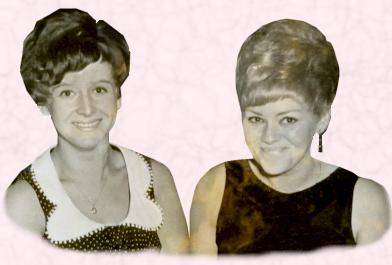 What is this hippy business doing in the land of Aquanet? How can one live in Texas yet eschew the ladies' prime directive of big hair? Remember what Danny from Withnail and I said:

DANNY: All hairdressers are in the employment of the government. hair are your aerials. They pick up signals from the cosmos and transmit them directly into the brain. This is the reason bald-headed men are uptight.

Everyday is a good day for a Withnail quote.

Anyway, above is a picture of some big-haired gals of yore.

The other picture, well, it's a picture from a medical scrubs uniform company, but I just had to share it with you. Came across this on the web today, and I thought "why is she tweaking his nipple - that doesn't seem very professional? I guess everyone is nasty these days." Turns out, she's holding a stethoscope that has gone into stealth mode in that technicolor yawn pattern on his shirt. Sheesh. Enjoy! 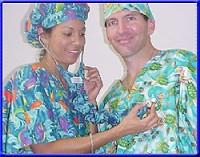 I've fallen in love with nipple tweeking lady. Don't shatter my illusions by talk of stethascopes.

tickers - you're a hopeless case, honey!

Damn, I've had a gazillion (well, 10 or 15 anyway) nurses and doctors listen to my chest but none of 'em ever tweaked my nipple.

As for Austin, riddle me this. Texas is a majority Republican state. How did our beloved state capitol get so damn liberal? I mean did it all stem from Hippie Hollow back in the 70's?

And speaking of Hippie Hollow, a couple of us were scuba diving there during the week back in the mid 70's. Not to many hippies around at the time. We were coming back in along the bottom and as we approached the shoreline we heard noise above us. We were at about fifteen feet or so and the visibility was pretty good. I looked up and saw a nekkid hippie female person just swimming along. I eased up to with in about 4 or five feet, took my regulator out of my mouth, held it up and hit the free flow button. That stream of bubbles hit her in the crotch and she took off like a water borne rocket, I'm tellin' ya.

DFW does have the largest collection of DowCorning's finest anywhere in the world.
Hell, we refer to Grapefest as the North Texas Breast Festival.

I stopped going to Austin about 12 years ago. Not my cup of tea. I like to have a good time but it was just got too weird.

Myron, she prolly thought you were a snapping turtle!

Phlegm, it shoul be a Nat'l pasttime- "slapping around bony addle witted broads". You'd be the team Capt.

As for big hair, having lived in Central TX and Houston as a young lass {60's& 70's} , I can testify they had a goodly share of big hair, too.

The only Nurse's I know who will tweak nipples charge exorbitant rates for that services!

I thought the same thing, about the nipple tweak!!