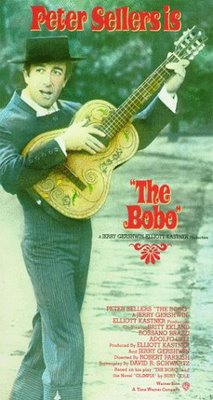 Speaking of Spanish, which has come up in a couple posts this week, I LOVE the Castilian pronunciation one hears in the films of Pedro Almodovar. My favorite of his films is "Women on the Verge of a Nervous Breakdown" which is very silly and sublimely funny. Highly recommended. Of course, I'm predisposed to love any film wherein peseta is pronounced "petheta." I love that little lispy thingie on the "s" sounds. Cute. Here, too, Carmen Maura has an intriguing method for serving gazpacho, the yummy Spanish tomato soup, served cold.

One 1967 film set in Spain is (though I think it's in Seville rather than in Barthelona) is The Bobo, starring Peter Sellers.

Peter's wife, Britt Ekland, stars as the ingenue and she has the most fabulous, groovy sixties wardrobe along with Maseratis to match. The film has a rather unexpected ending which leaves you thinking either Sellers' character is brilliant or a simpleton - either way, what he wants out of life is not something he will compromise on, regardless what extraordinary opportunities come his way. I think the surprise ending makes this film much more memorable than most, and while it wasn't side-splittingly funny as some of Sellers' films are, there is still plenty to chuckle over, and as usual, he brings an elegance and grace to what could easily have been a ridiculous character and nothing more. I suppose that is something I love about his acting - he always donned a persona with conviction, never morally judging the characters he played.

I must mention one riveting scene in this film features a flamenco dance performed by a sweaty, intense woman. In a strange way, she's ugly as she strains through a grueling zapateado (that's that rapid-heel slamming dance so common in flamenco) but it is a magnificent vision. I think that scene alone is worth seeing the entire film.

And speaking of Peter Sellers, I saw the 1967 original Casino Royale a few weeks ago, and it was corny as shit (corn being one of the Elfin Foods™ which the intestinal elves magically re-assemble). What has derailed my fragile psyche time and again in the past few weeks has frequently been the cornball motif Burt Bacharach composed and which that dastardly Herb Alpert and his Tijuana Brass performed - I just can't get it out of my head and in a not-good way. Yeuch! Anyway, I must say that despite oozing a complex gravy of camp/groovy/spoof, this wasn't enough for me to enjoy it very much - I thought it was particularly bad, and I have pretty low standards, so that is just sad. I will say that Ursula Andress was a vision of loveliness as ever, so the film's not a complete, er, bust, but nor do I recommend it. Proceed at your own risk with this puppy, 'cause that dog won't hunt.

Posted by phlegmfatale at 1:02 AM

I used to date a guy who loved that film and I saw it so many times in the 70's and 80's - I never got it, and if you didn't enjoy it, I feel totally vindicated, you bastard, why didn't you like more interesting movies, and shy did you put so much salt in the popcorn all the time, and why did you always have to shake your popcorn in your hand so the salt would fall on my clothes all the time... Excuse me, Phlegmy. That was my evil twin.

I'm sorry that you didn't love Casino Royale, but I'm swooning that you even watched and reviewed it. It was terrible, but that's what made it great. It had 3 screenwriters, 7 other writers (including Joseph Heller) and 4 directors (!). I saw it 1st run when my big sister and her husband took me to a triple feature at a drive in in Toledo Ohio. The cast is a running cameo list. And last/not least, somebody left a copy of the soundtrack at my house some years later, and I love it! So learn to love the songs that will not leave your head. You made peace with the voices, didn't you?

Speaking of '60s spy spoofs, have you seen What's Up, Tiger Lily?

meg nakagawa - Good for you for dumping that inconsiderate retard - the dealbreaker for me would have been when he shook the salt off on my clothing. And watching that film repeatedly? Perhaps he was searching for the secrets of the cosmos in there somewhere. You are excused, for I brought up a no doubt thorny memory for you, and you simply needed to unburden, darling. I'm loving your evil twin, by the way. The evil twin has to emerge when we've been too nice for too long to someone who treats us like a sucker. Mwahahaha.

g bro - I'm definitely marrying you in the next life, because I suspect you are a sick individual and can maybe offer me a roadmap for traversing the rocky path of madness. Welcome to my world.

tam - I LOVE THE CRAP out of that movie! I love when he's peeping at the bathing lovely through the keyhole and gets an eyeful of soap. OH, I'm going to have to blog this one soon. I really like that movie.

Dr. Strangelove or: How I Learned to Stop Worrying and Love the Bomb

President Merkin Muffley: Gentlemen, you can't fight in here! This is the War Room.

myron - Dr. Strangelove is in my three-way tie for favorite Peter Sellers movie along with THe Bobo and Being There, which is a heartbreaking swan song of a film.