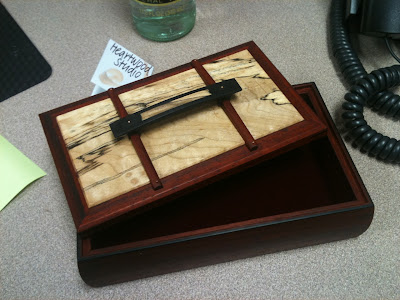 A couple weeks ago, a customer said he was sending me a present. He sent it to the company's other office in another state. Someone brought the parcel down to me Monday, and was quite keen to know what was in the package. He hovered as I was opening it and asked what the disposition of the customer was at the conclusion of the transaction-- were they angry or happy? I said it was a very 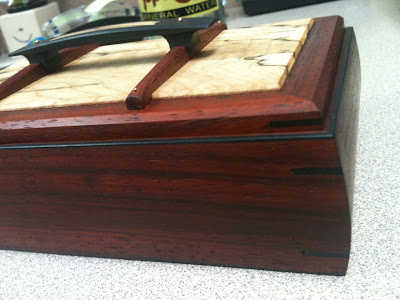 happy transaction and I hope he sent me a puppy. I wondered if he thought it was going to be something repugnant or dangerous? *shrug* To little ole me? pffft.

Turns out, it was this exquisite wood box he'd made. The craftsmanship is superb. It's so lovely that I almost didn't know what to put into it at first, but then I realized: Grandma's watch. :)

I mentioned to one of the executives that another customer-- a darling older lady-- had said she was going to send me an edible bouquet. I said I hoped it wasn't a bunch of roses made of fruit-rollup underwear. He 'bout lost it.

Anyway, I'd try my best even if people didn't send me lovely things for doing my job, but it's nice to know that sometimes someone notices the extra effort and wants to show their appreciation. I'll treasure this always. :)
Posted by phlegmfatale at 12:01 AM

That is just beautiful!

Wow - that is just stunning. I'm so jealous!

And good for you!

Wow - that is just stunning. I'm so jealous!

And good for you!