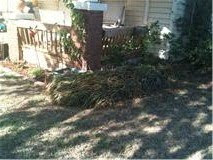 I'm prepared to admit that the weedy seedlings of junk trees that now stand watch over this flower bed are even less attractive than it was with all that liriope, but I frelling hate that stuff with all my might. I really and truly do. The saplings will come out and that will be another story. The only time I'd ever recommend liriope is if you have a place that is so butt-ugly and undesireable that no one will ever want to garden there in future. Or, if you really hate a future homeowner, plant a big mess of this hideousness and they'll think of you later aplenty. This was probably planted more than a decade ago and was a dense network of filament like roots that formed a mat on top of and into the soil. To top that off, the roots have little tater-like nuts on them (corms? bulbs?) which, if the plant is simply broken off from a superficial level, will grow an entirely new eruption of the very scourge one was attempting to eradicate. 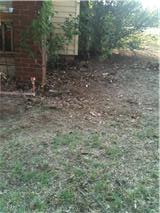 I started the tedium of removing the liriope from the flowerbed on the North side of the porch early this morning, and I just completed the task. I can feel how miserable my hands will be tomorrow. I feel bent over like an old crone, and I feel as if I did about a million situps-- a task for which I am clearly not meant. The only respite I've had from this hard-day's slog in the garden was the occasional interruptions of the "Oh, Shit!" phone from work. I've been on call so the 9 or so hours when I started this morning have had enough interruptions to give me a break from the task.

I'll be happy when I have something pretty to replace this to show in its stead. For now, the bare earth is glorious enough.
Posted by phlegmfatale at 5:36 PM

I've been debating planting some flowers along the walk here, once the warmer weather is here for good, but I also have to take into account the ankle with the four healed breaks and two titanium screws, which simply doesn't lend itself well to gardening, no matter how much I miss it.

I am working on clearing my garden area today. Hopefully we will have lots and lots of tasty veggies to put up this fall !

Don't worry Phlegmmy, it'll be back... that crap is about impossible to eradicate! :-(