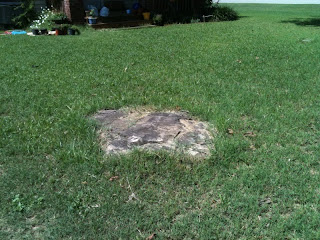 Fall is a great time to put in hardy perennials. The cooler temperatures coupled with moister soil than the usual arid Texas summer fare makes for the fine establisment of a healthy root system in anticipation of winter and then a harsh summer to come. 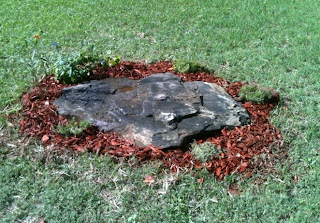 I did some container gardening a few months back, but I'm ashamed to say that a spate of 12 hour days at work killed my watering habit and most of my potted plants died. Anyway, baby steps, right?
I tucked into clearing the weeds away from the front flowerbed a week ago Saturday, and then I set in a handful of new plants. I really want to find an Oak Leaf Hydrangea for that bare middle patch. These are some salvia mostly, and a fern. The salvia should fill out and pretty much cover the area by this time next year. I really don't need the hydrangea, but they're some of my favorite whether blooming or not.
At the rock in the lawn, my reel mower really can't get up to the edge of the rock, so I needed to do something different that I could 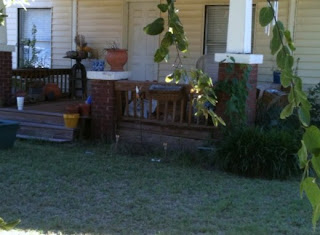 mow right to the edge with. The hairy sprays of grass/weed around the rock made for an untidy look that drew my eye in an unpleasant way every time I pulled into my nice little dirt driveway. My lawn needed a bikini wax. Thus I set in these heat-hardy perennials this past weekend. Digging around that rock was some of the hardest gardening I've ever done-- it took hours just to prep the soil. There are two thymes (regular and wooly), one skullcap, a creeping silver germander, a dark blue salvia, a rock rose and a red butterfly weed. Yeah, they look a little puny just yet, but they'll fill out quickly enough. :)
I bought two bags of mulch at home despot and was too wrung out later when I realized they were color-treated pieces of bark, which pretty 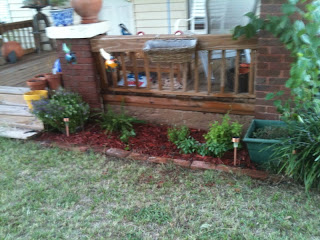 much makes them the fake-tits of the gardening world. I think faded-out mulch is just fine, actually, so this sort of sticks in my craw, but, *LAZY!* Sweat-drenched and covered in garden muck, I couldn't drag my tail back to the store for the other stuff, and as hot as it still is here, I didn't want to leave the freshly turned earth exposed. That said, I do have some nice, lovely earthworms in my garden. :)
More to come.
Posted by phlegmfatale at 12:01 AM