...only as clean as Coldwater'll get 'em.

Did you hear that joke about the guy who dines with an old hermit friend who says the dishes and things are only as clean as Coldwater'll get 'em, and the guest grins and bears the meal? Then after dinner, the hermit calls over his dog, Coldwater...

Himself grandly cooked me a lovely steak dinner with mushrooms. Was delicious. I left the dishes until the next day. "Ahh!" I thought to myself as I approached the aftermath, 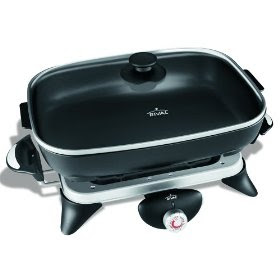 impressed that he took trouble to at least clean out the electric skillet. The lid was sparkling clean and there didn't appear to be anything remaining in the pan. Was sweet of him to at least take care of washing the largest vessel used to prepare the meal, and one that's a bit unwieldy in even a large sink.

Finishing up the dishes, I lifted the lid on the electric skillet and thought "hmm, that's oddly redolent of mushrooms, for a clean skillet..." Further investigation yielded evidence that my dearest delight had ill-used my wee pups as slave-labour for kitchen help. No doubt they were kicking and screaming the whole way. Some sort of pack behaviour, I'd reckon. So that's how he stole Alpha- status right out from under me... *snerk*
Posted by phlegmfatale at 12:01 AM

What was the evidence?

talk about cruel and usual punishment, the poor dawgs better have gotten some steak, not just stake flavored veggies!

Wing - The evidence was traces of food, especially on one inside vertical surface. They missed a spot, but even a half-hearted washing would have removed those traces...

Bradley - I know! Wasn't that a cruel tease? However, they got part of Mommy's steak, and they licked both our plates. :)

My husband does the exact same thing - even though the dogs know who feeds them, bathes them, loves them and sticks up for them (especially the oversized slobbery one, I'm always having to defend his space hogging and drool flinging), they all melt like popsicles if Dad offers but a morsel of meat or anything that smells of meat. Pathetic how easily the balance of power sways.

Goodness. I have this vision of the three of them snarling as they compete over the treasure.

I'm sure that the dogs are packing their toys and beds and plotting to escape in the night so that they don't have to be cruelly forced to help clean up again. :)

Slave labor! Oh dear. And moving their allegiance so easily. It like that syndrome...googling..Stockholm Syndrome!

As my husband says - the dishwasher is just for sanitizing!

Mr. B and I are with Old NFO and Christina--puppy pre-wash is the only way to go. And if there's a little extra left on a plate, then it's also a snack.