indoor efforts, for a change... 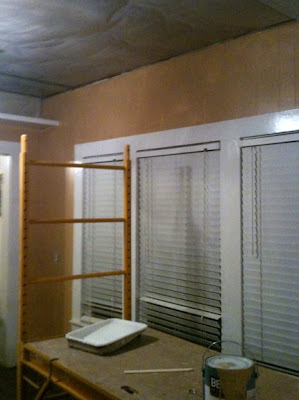 I was chatting with breda, alan, Weerd and some other friends Thursday night, saying I was about to go paint the dining room. They asked what color and I described it as a color most oft found in a baby diaper. I think the color is called honey apple butter or some such, but baby doodie d'or seems most fitting. Truly it's not as vile as it must appear in the picture.

The first coat was laid on a few months ago, and then in the throes of too much overtime at work, finishing the paintjob took a back seat to preserving one's sanity. The first picture is how it's been since the Spring, and the second photo is after the second coat which I laid on Thursday night. 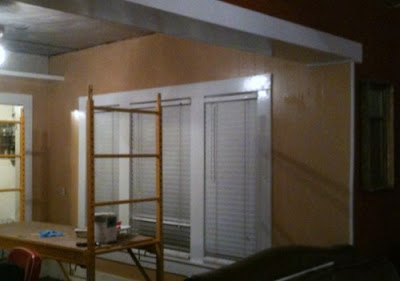 Yup, that's plastic on the ceiling. This weekend hopefully I'll get the beadboard prepped and ready to go up in the dining room, and then the cove moulding can go up. I'm getting excited. *squee!* Will be nice to have the dining room and living room all tidied up and looking as I always imagined since I first laid eyes on this house. :)

You consulted WEERD on colors to paint a dining room?

It looks like creamy peanut butter. Not a bad color at all.

Great, now every time I see it, I'll picture you dipping your paintbrush into a poopy diaper!

It still looks nice, though. :D

So glad to see you back working on the place even if it is just a little doo-doo doodling.