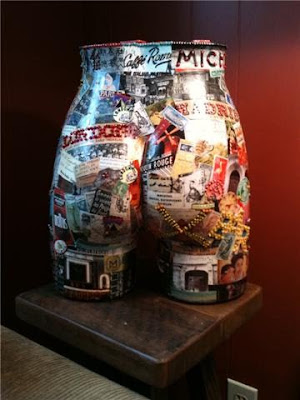 I had my jewelry in a few shows with a mixed media artist who made some of the most adorable things. As I've been unpacking things in recent weeks - things I haven't seen in over a year in most cases, it's been sort of like Christmas to see much of it all again (not the least of which has been my beloved All-Clad and the other kitchen accoutrements). Then I opened the box with this piece and I squee'ed. 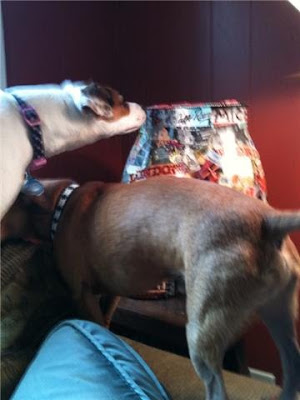 This piece delighted me from the first moment I saw it. Called I see London, I see France, the mixed-media artist I mentioned made this and I simply had to have it. The form it's made on was an old department store underwear dummy thing. I think it's adorable and it always makes me grin.

The puppehs were puzzled, but got used to it soon enough. :)

Well, I'm no art expert, but I do like that piece. More importantly, the doggies seem to have accepted it, which is what *really* matters, right? :)

As a once upon a time art major, it's not the strangest work of art I've seen or heard of. I do have one question though. Is it positioned to look like it's peeing in the corner on purpose?

We need close-ups so we can read the copy. Not that that would change anything... it's just that "Enquiring Minds" syndrome at work.

Did they sniff the other side too?

It's entertaining, I'll grant it that.

PS - How are the belly dancing classes going that you started last month?

The "Is it Art?" question is exactly why I have the "Art, damn it, art! watch" on my blog.

I say, "Of course it's art!" But my definition of "art" is "anything you can get away with pointing at and saying 'That's art, damn it, art!'"

You would be surprised at how controversial that definition is. Especially among people who have taken, like, graduate level courses in art theory and all that stuff.

Hey, it's your home! Whatever you want to plant anywhere is fine! You like it and are making the payments, its great by me!

I would much rather visit a home with "reflections of the personalty of the owner" that some "Better Homes and Gardens" sterile room!

You say it's art, I believe you! This place is rampant with stuff that does not fit the "mold"! The reloading bench comes to mind!

I created Retro Sundays to ease the learning curve for guests, LOL!

I am so Sorry! Please let us know how it goes!