There's a meme wot's been going around about favorite planes. Well, I'll tell you: I'm unfond of the sensation of being up in a plane, thusly my favorite planes tend toward the sort of planes that exist only 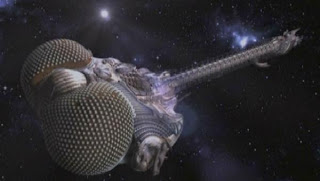 in flights of fancy.

Lexx - dragonfly - well, ok, it's a ship, really, but let's not quibble over details. Loved the stuffing out of this show. 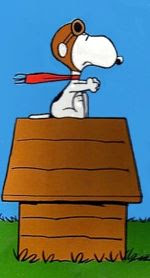 doghouse, but the thing I really like about this one is that it never actually leaves the ground, trapped as it is in the two-dimensional confines of a comic strip. Me likee! Me likee long time. Nary a pitch nor a roll in sight, which means stuff is less likely to slosh out of one's water dish.

Then there's the Starbug transport plane from Red Dwarf. I love anything to do with this show because Li

ster's downmarket Liverpool accent is so earthy and raw. I can imagine the bad breath he has after his chili-cheese-chutney-and-egg sandwiches, and I'm kind of okay with that. Tell me more about Fiji, Lister. 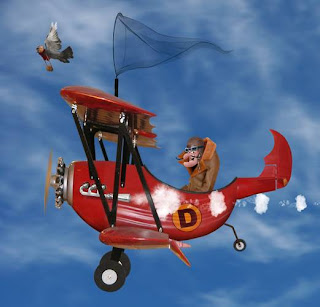 Three words make this next plane really special and I'm sure you'll agree:
Stop the pigeon. 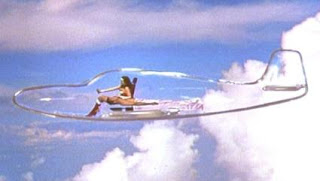 And the ultimate plane, of course, is Wonder Woman's invisible plane. All the better to see her splendid footwear with, oui? What would make the invisible plane perfect would be if it were available in a sporty model with gaily colored gears and gizmos, kinda like that techincolor teeter-totter watch. Remember those? I mean, the invisible plane with visible guts would have to be for special appearances only, because it wouldn't be tres stealth to go around with the plane-guts showing, even if the rest is inweesible.
Posted by phlegmfatale at 2:30 AM

I've loved planes and flying since before I could read. You apparently can take 'em or leave 'em. Yet MY choices are fairly prosaic and YOURS are fascinating and charming.

jpg - Aw, shucks! Glad you liked them. I almost didn't post this, thinking this would cement my reputation as an oddity. Not that there's anything wrong with being an oddity...

The only two I know are Snoopy's and Wonder Woman's!

That's why I didn't do this meme, I don't know jack about planes, and I wasn't clever enough to think of something like this!

I love the Wonder Woman plane. She does need some detail work done, but all in all she seems my likely choice.

I think your imagination is beyond fantastic!

I LOVE those!. Priceless. I'm going to have to post a link to you on that one as I just posted a website where you can look at cockpits of military planes to go along with the meme.

Red Dwarf. . hilarious. . . I can't find it on TV anywhere any more. Another one I liked was Blakes Seven.

Hmm, maybe we should start a top 5 fictional spaceships meme?

That way everyone could play.

This was cool! Where'd you find the picture of the "Dastdardly" plane? It looks like one of those ViewMaster cels.

christina - I don't HATE planes, as I imply, I just hate being off the ground. I don't even really like tall buildings. I thought this was corny of me, but I'm flattered you think it's clever.

skywriter - I was a little shy of what you'd think of it, since you sorta are the embodiment of Wonder Woman with your made plane-flying skills. Every so often I have to get a Red Dwarf fix over on You Tube - one of these days I'll buy the DVDs.

myron - You know, fantasies about a kickass Amazon sound perfectly healthy to me, even for a 5 or 6 year old boy. What's not to like?

LaP, you SO totally ROCK!
I will come right out and say it, I am NOT afraid to fly...but I am terrified of take offs and landings so I didn't participate in that meme...but you, with your inimitable style...Woman, you just continue to amaze me!
Although I may go back to the meme in it's ORIGINAL form when Kim du Toit started it, your 5 fav classic cars. Now that's one I could get into.
Of these planes, I'd fly with WW or the crew of Red Dwarf or Serenity any day of the Week. Mal, grrrr!

OK...what IS that thing next to Wonder Woman? Is she like, ferrying cadavers, or something? Or does The Invisible Plane have a sleeper seat?

aw, shucks, Hols - you ALWAYS know how to make my day. :) Yeah, I'm okay with flying, except for the take-offs and landings and the middle bit. Otherwise, I'm okay with it. I do it, I don't go to lengths to avoid it, but I can't relax on a plane without an obscene amount of Bloody Mary.

buck - I found it on another site - it's a reclining man with an invisible blanket over his waist down to his feet. He's shirtless, and may be injured-- he doesn't appear to be smoking a cigarette.

Sudiehoney - SO sorry! I think you posted your comment while I was composing my responses, and it got inserted above mine and then I overlooked it! I found it on the internet - did a search from google images for "stop the pigeon" or some such. Glad you liked it! :)

And remember to wear pants...